After an uneventful ep5, Sacred Blacksmith 6 tosses us right into a fight with no explanation. Just three girls going after Cecily, or rather, her sword Aria.

Be fair, she bravely fights back and gets some good shots in, it’s three against one, and they all have demon swords. So does Princess Charlotte, their boss, who has come to forcibly take Luke away to the empire. This sudden glut in demon swords is gonna drive the price down … What’s most bizarre here is after you-know-who saves the day we get the whole backstory of Charlotte’s quest for the throne, and all is forgiven …

Yeah, you know, Cecily has a point. Those knights were even talking of killing her, but instead they are all going to live at Cecily’s place until this gets sorted out. They go from being enemies to freeloaders. We even get some overeating scenes and “who’s gonna pay the tab?” gags. It’s rare to find a show where the enemies go from threatening to goofy so quickly.

Railgun 7 showed some improvement this week. The enemy, though a wuss, was actually dangerous.

And you can understand his motives: Judgement is never there when you need them. The show took great pains to show how hard Kuroko and Uiharo were investigating, yet it took Judgement forever to figure out that the targets for all the bombings were their own members. Who’s running that outfit? And in the end it was non-members Misaka and especially Touma who save the day, though Misaka got all the credit. 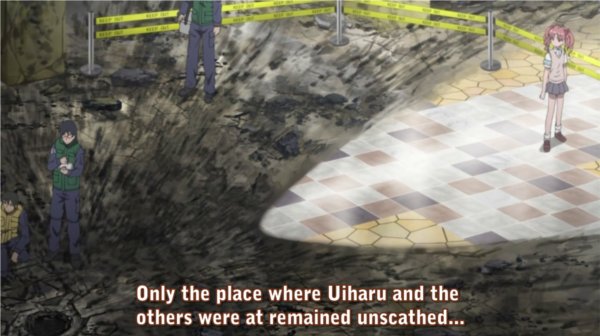 Any Railgun episode improves when Touma’s in it. He can match Misaka’s power, which makes her mad, and he couldn’t care less, which makes her even madder. This show also takes a moment to look at Saten’s powerlessness, and how she feels about it. I have a feeling we’ll be looking at that more closely in future episodes.

The moments never end in Sasameki Koto 6. I thought ep 4 (Whoops! I skipped an episode!) leaned too far over into the laughs side, but this ep brings back the fine balance. The long pauses, longing looks and delicate music (especially when the Chaste Women’s Chorus is singing) are undercut by comedy at just the right moments, or the comedy fits right in so we get that delicious irony that I love in this show. The library girl Chizuku wants to make up with Kazama after hurting her in ep1, but Kazama says she’s over the whole thing. Only Murasame can spot the lie. But the ep is about Murasame, who is forced into clumsiness lessons by Tomoe to make her cuter …

But Murasame cannot be what she isn’t, and what she isn’t is Kazama’s type of girl. There’s a touching and quietly comic scene when Kazama spends the night at Murasame’s place. Kazama talks about Chizuku, while Murasame, in the bed right next to her, can only listen to her as a friend, and quietly fume because that’s all she is.

The Kazama/Murasame dynamic propel this series, of course. I’m wondering if that will be enough. Tomoe and Miyako are official sidekicks now, and we don’t see enough of Akemi or especially Kiyomi. But it’s only twelve episodes, so we’ll see. What? The series is half over already?