Last night I started to watch Darker than Black episode 7, only to get confused. Wait, wasn’t there an ambush going on? What happened to the thingamabob everyone is after … Then I realized I hadn’t seen ep 6 … Well, that’s taken care of now. Quite an interesting episode. First there’s chasing down the thingamabob. Then we learn what the thingamabob really is! I’ll spare my hoorays for when we actually see Yin as more than just a ghostly thing.

Oh, and Hei has lost his contractor powers … But the true surprises are on a more personal level. All this time Suou is trying to work out this compassion and love thing, and can’t understand why it makes people act funny. She kills Norio’s contractor mom, because it’s what she’s supposed to do, but is quite taken aback when Norio is upset about it.

All right, she didn’t know it was his mom, but she isn’t quite ready to accept the fact that her actions have consequences for people she did not want to hurt. She’s also supposed to destroy the thingamabob/Yin, and would have if Hei, of all people, had not interfered. Hei is changing; Suou tries to figure it out. I can’t figure it out, myself. Hei telling Suou not to shoot anymore (“It doesn’t become you”) made me take a step back. And it looks like he’s going to stop drinking. It’s as if losing his powers is making him more human again, and part of that is making sure others don’t become less so.

Seitokai no Ichizon 7 presents us with a dilemma. The student council goes on a field trip to Tokyo. The possibilities having fun are enormous, yet they are the student council, after all, so once they get there, they don’t do much except hang around the hotel room. 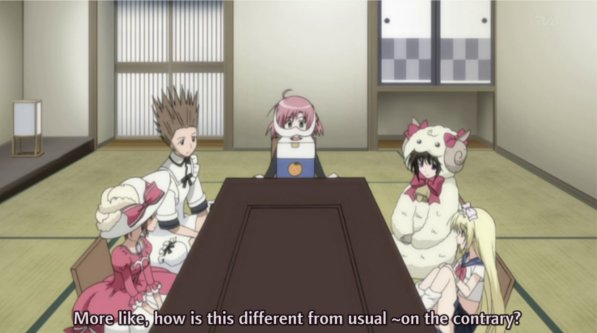 They tell ghost stories, they change into new characters and put weird words at the end of their names. And most of it is funny, though bewildering for me.

In short, the characters do all the same things they always do, except somewhere else. This is the intended irony, of course, but for me it feels like wasted potential.

Letter Bee 7 finally brings us to the exam stage, and happily it’s a practicum. But first they clear up one point of contention:

Lag, Niche and Steak must deliver a letter and battle a Gaichuu along the way. Their rival is obviously clueless about fighting them, so there’s not much tension here. He is instantly freaked out by the giant centipede (Well, I would be too), but the fun starts when Lag and Co. show up to save the day. 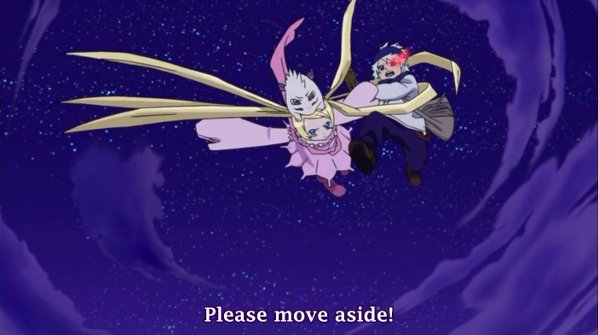 There’s a bit of shenanigans from the rival which is quickly exposed. It’s not much for an episode and seems too pat, until Lag discovers that Gauche, the man he looks up to, has quit the profession. That should sidetrack him nicely for a while.