Bantorra isn’t an easy series to follow at any time, but ep7 left me completely confused. We got Zatoh, who has the stolen book and wants to atone for his sins by dying, and naïve Noloty who’s keeping an eye on him by being a pest and getting in his way 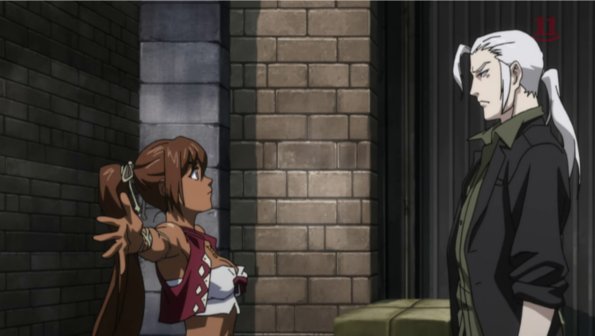 We also have monster training, where Enlike kills another student and wonders what it’s like to smile. But then the confusion begins. Zatoh, when examining the book, sees Noloty train, or maybe that was just tossed in there, and instead he sees Meseta chase down some guy. What book is this, anyway? But is Enlike actually Zatoh in the past? For some reason I can’t quite get my head around the idea, though they both want the same thing: to be able to smile.

Meanwhile the creepy old guy with the glasses watches Zatoh with amusement, and so does Meseta. And the true monster is revealed at the end, I think. Well, it’s good to have a show around that doesn’t just plunge straightforward into the plot, and maybe I’ll have it figured out next time.

In Trapeze 6 Yuta’s cell phone addiction is nailed by, of all people, Mayumi the nurse.

The stuff before and after is simply embellishment, though it’s nicely done. Yuta is good with his cell phone, but not so great in real life encounters. It’s not as though he withdraws and becomes a lump, but rather he tries too hard to be outgoing and obliging. The VA does a fine job of injecting a layer of desperation into the character’s chatter. Yuta loses a girl because of his cell phone, and he discovers that his friends aren’t really that into him. Dr. Irabu takes a less active role in this episode, not even following the boy around, but he manages to shake Yuta up by sending him endless texts (can you imagine what he’d do with a Twitter account?) and invites him to a party. But again it’s Mayumi who perhaps helps Yuta the most. She says she’s a loner, but Yuta sees that she’s comfortable in the role, confident even, proving that you don’t have to be social to be happy. Yep, the nurse does the heavy lifting in this episode.

The more this show goes on the more I enjoy the means to the end, even if I can spot the end a mile away.

Not much to say about Railgun 8 apart from the fact that this is once again a frustrating show. It has a nice set of characters who interact well, but the script is often so wooden that they have to fight it. I am referring especially to the scene at Uiharu’s where they try to get to the bottom of the Level Upper rumors. Saten just can’t come out and say where she’s gotten her information, it has to be prompted out of her, as dead time passes. Compare that to funny scenes where Misaka tries to charm the info out of some strangers, to Kuroko’s frustration …

… and we have a show that can turn from entertaining to plodding in a single minute.

Which is a shame, because when the show’s on its game it can be a lot of fun. I love how gangs of people try to rough up Misaka only to get beaten badly, because she delights in the situation.

Her dynamic with Kuroko and the other girls help, too, that is, if the scene is at least written well. One other quibble: isn’t the Graviton case over? I mean, they caught the guy, right?