I was hoping for something epic in at least one of these final episodes, and Darker came close, but …

Poking around the intertubes to see who had a better understanding of what the hell happened in the Darker than Black finale I found most people are just as bewildered as I am. That’s sort of a relief, I’m not as stupid as I thought. I thought that all would be come clear, but it left me scratching my head, and cursing because the story and the world are definitely not done yet.

All this time I thought Izanami and Izanagi were Yin and Shion, or vice-versa, but then we get this:

TWO Yins! And they want Hei to kill her, or them. Well, that’s what he had come to do, anyway …

And Shion has created an alternate earth, apparently, and Suou is now in it, along her entire family, and July (and Misuzu and Babo–nice touch). Kirihara runs around, moments too late for everything. She wasn’t well used in this sequel. And the CIA has taken over Tokyo, for no other reason, we’re told, than that they’re Americans and tend to do this sort of thing.

Of course the core of the show is Suou. She makes it to the gate, meets Shion, who dies at the hands of Izanami/agi, and July, who is showing more emotion now, who also dies. And then she pretty much dies, too, at least that’s how it felt. There’s a heart-wrenching scene where we see her memories and watch them burn away, for she is losing them. This is as close to a death scene as you can get with no death. For the heart of the series to end up like that, even if she’s now a happy schoolgirl on Shion’s world who thinks now and then that she’s missing part of her life, is tragic to watch.

But that’s one of the reasons DtB is so effective. It’s not afraid of doing just about anything to the characters, as everything is part of a bigger story. Suou’s has been subsumed. Hope to see you again, Suou, as soon as they come up with the next series or OVA.

Seitokai no Ichizon doesn’t have a confusing ending because there’s no story to end. But the characters are fully aware that this is the last episode, such is the type of show this is, so they do try to give us a wrap-up (After they deal with Mafuyu’s confession by making it anticlimatical). They all try to think about what they’re going to do when they grow up …

Then, in this the final episode, they introduce a new character, Nakameguro. Here the series goes from silly to touching, as we learn how grateful Ken is for the girls. It’s better than some of the show’s attempts at sentimentality, but it still lets the air out of the episode. Thankfully, they end silly, and totally aware of it. 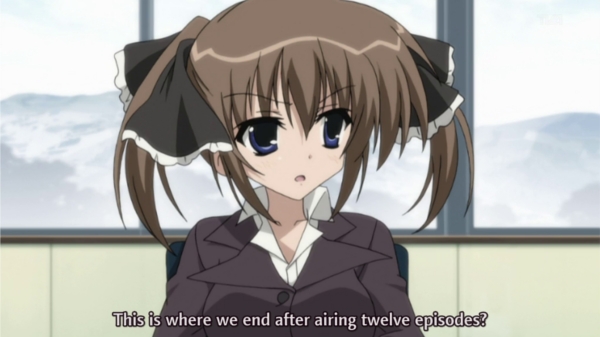 It was a silly show, and I will miss it.

The Sacred Blacksmith has a satisfactory ending, though the show as a whole wasn’t particularly notable for anything. Just your run-of-the-mill fantasy anime, old Europe division. When the last episode ended all sorts of monsters are running amok in the city, but we start with a quiet moment where Luke and Lisa talk things out, though we know what each side is going to say. Luke is sorry he burdened Lisa with the old Lisa’s baggage. As for our Lisa:

Then we get on to the fight. Nice to see the city militia, useless in most monster fights, put up a good effort this time. But things drag because we all know what the big scene will be: the fight between Luke and Siegfried, the most annoying snickering talky villain I can remember. I should have expected Cecily to show up at just the right time when Luke is injured.

And the climax is exciting enough, with Cecily using the katana Luke forges for her (while Siegfried waits. At least he can be polite). Meanwhile we see the flaws in the show stand out, Cecily’s fight with Siegfried’s guard which is there only to get Aria out of the action so she can’t be used in the real fight, and to kill time, and the long speeches by Siegfried, who could have killed them all if he’d have just stopped smirking and get to it …

No, nothing notable about this show. Darker than Black’s ending packed a bigger punch, confusing as it was. But I congratulate it for keeping me interested enough not to drop it, in spite of its banal story and lack of depth.