In terms of the overriding story arc, Sasameki Koto‘s ep12 is all filler. Murasame and Kazama don’t get any closer. None of the characters are effected in any way. They’re stuck at the school during a rainstorm and discover a strange message scribbled in a library book. The message leads to further clues stuck in gym lockers (the boys’), behind portraits, and finally a dunk in the artificial brook on the school grounds.

Tomoe leads the investigation out of boredom. The others are just bored or curious enough to tag along. And it doesn’t amount to much. All we get out of it is glimpses into the characters’ personalities and goals. Aoi is going to write another book. Murasame intimidates wimpy Akemiya into going into a boys’ locker room to retrieve a clue, showing that their dynamic hasn’t changed.

Quite right. It was far from boring. This show is strong enough to get by with occasional episodes like this, though I’m a little surprised since there’s only one more episode left.

11Eyes stumbles through its finale. I thought Darker than Black 2 had a confusing ending, but this one is simply incomprehensible. First, the events from the last episode are completely forgotten, an alternate universe switch, maybe, and we’re back to the first confrontation with Liselotte. Kakeru gets the fun started by killing himself, even though he died last episode. 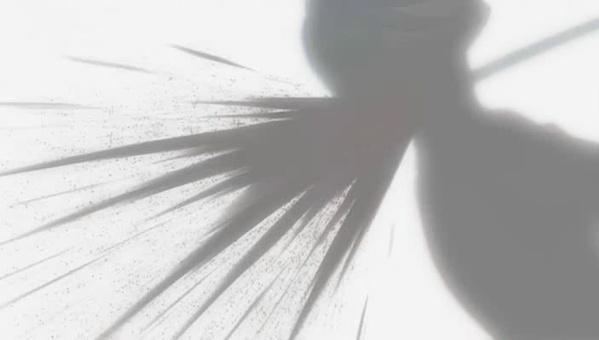 But of course, he’s not dead, but in flashback land, and we get a bunch of scenes showing him and Yuka and Kukuri. After he comes to it’s exposition time, all to do with these alternate universes, so convenient because you can just pluck another version of yourself up and move them where you want. And finally an epic rooftop battle more where sacrifices are made …

And everyone lives happily ever after. All the dead people are alive again, and life is normal, except no one says much about that evil-looking moon in the sky …

I will say I enjoyed seeing the good guys and the formerly evil Black Knights working together to defeat Liselotte. Superbia/Misao teaming with Misuzu was especially nice. But this satisfaction isn’t worth much given the overall show. But after twelve episodes it’s hard not to have an emotional connection to the characters, no matter what show it is. Beyond that 11Eyes had almost nothing but some cool lights and a good soundtrack, but I’m a sucker for big orchestras with pipe organs anyway. But, like The Sacred Blacksmith, I’ll give the show credit for keeping me watching. But I’m happier for getting it out of the way before the new year.