Ladies vs. Butlers 2 doesn’t improve much.

Akiharo begins school, meets butler-buddies, including Shingo(?), who is actually as perverted as everyone imagines Akiharo to be, and a little guy who’s job it is to add a few lines here and there. He shows his abilities as the World’s Worst Butler. There’s a scene where the clumsy maid falls and mounts Akiharo, which goes on way too long, then butler/maid training in a pool, because you never know when your master is going to fall off the cruiser, right? It’s here where things become completely senseless. They are told to jump into the pool in full clothing … and just swim around. Then this guy shows up. 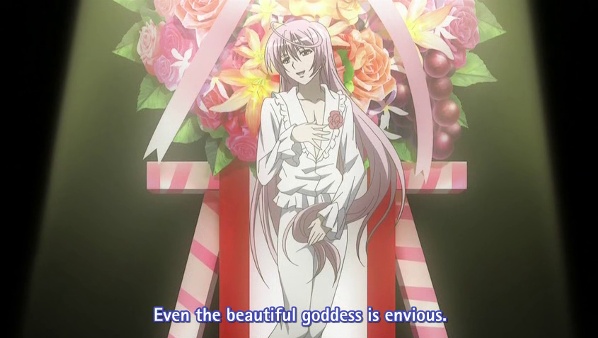 He dives into the pool and we never see him again. This non-sequitur made me happy. Happier than speculating what Saikyo might be up to, or seeing Flameheart’s tsundere routine (the dere part is appearing sooner than expected). The only reason for me to watch this show is for it’s surreal moments, and I wish there were more of them and less cheap fanservice and occasional quiet human drama moments. No doubt I will drop this show soon, especially since my schedule will radically change next week and I may not have time to watch as much anymore, but right now I will hold out and hope the next episode has more strange people jumping into pools and vanishing.

With no gimmick to work with we get a chance to see what Dance in the Vampire Bund is really going to be like in ep2. It’s not bad. The story isn’t all that original, but it’s done with style. As for the story, Akira, a schoolboy with amnesia is going through his daily life while rumors swirl around the city about vampires appearing. There’s a nice scene where we meet Yuki, a girl who likes him (and will probably provide the show some victim fodder later on), and see their comfortable relationship in action. In other words, they act as mature kids who genuinely like and respect each other. This in itself is a relief to see this season. Then Mina appears.

Actually she appears twice, first, hiding goofily in the hedge, then outright presenting herself to the astonished Akira. Moments later the attacks begin. A helicopter, assassins, and another vampire. Akira, naturally, is confused, and so am I. He even asks the obvious question: if she’s so important, such a target, why is she out alone, tripping on her own dress? She mumbles something about losing a bet, which is no answer. 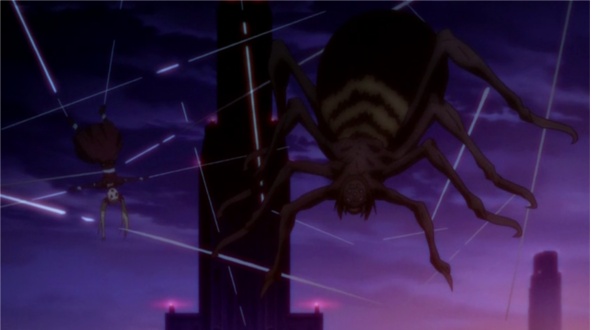 The other thing bugging me was why is she all of a sudden so vulnerable? Apart from the fight with the assassins she shows none of the kickass abilities she displayed last episode. If Akira hadn’t awakened to his werewolf/servant sensibilites she’d be caught or dead.

Apart from these quibbles I enjoyed this episode. Akira’s confusion over his strange urges to protect Mina was well done. Yuki, as the vulnerable innocent friend, isn’t boring. The art and animation are good to look at; I particularly liked the photorealistic shots of the school and city. There wasn’t a dull scene. If the story can overcome the cliches this might be quite a good show.

Baka to Test to Shokanju gets a little better this time around, I’m not sure why, but I think it had to do with Yoishi’s table. You see, he accidently superglues his hand to it during the first scene. But once that gag was done, it remained stuck, giving him a sight gag throughout most of the episode. I actually found this quite funny.

Not everything worked. There was a bewildering scene where Himeji is talking about he love letter with Yoishi (still with his table), while a devil Yoishi character at the bottom of the screen gives sarcastic replies. It doesn’t help that the conversation made little sense to begin with, or that I was forced to read two sets of subtitles for over a minute. I watched the scene twice and got a small headache from it. 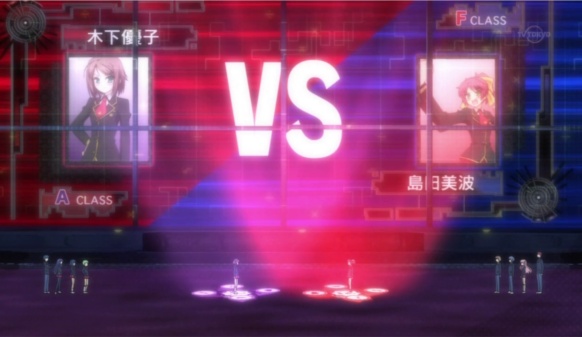 But the battle scenes were amusing, and I was actually a little pleased that Class-F lost, since, grade-wise, they should anyway, and that they’re worse off than before. And while the quick dialogue sometimes left me in the dust I appreciate a show that actually has some energy to it. Good enough to keep for now.