Yumeiro Patissiere starts where it left off, with Ichigo diving into the pond to rescue Satsuki’s bottle of rose water. Kashino, of all people, dives in to rescue her. Still, as they’re drying off, Satsuki says he’s going to drop the effort to make rose cake.

We know Ichigo has a quick temper, but it’s not often she uses it in such a righteous manner.

Now, Yumeiro Patissiere has a tendancy for the heroes to be at a loss, only to have a coincidence provide them with inspiration, which was what happens here. Because Ichigo and Kashino dove into the water and now smell like peat moss, Satsuki comes up with a new recipe! And so we get to the big battle. The opponent’s cakes look lovely and taste great. Team Ichigo, meanwhile, have come with new recipes … What are they planning?

It’s win-win-win. Team Ichigo wins. Satsuki wins by making a successful rose pound cake. And Ichigo wins twice, once for refusing to let Satsuki give up on his father’s memory, and again because the recipe changes and subsequent presentation which wowed the judges were her idea. And her teammates’ respect for her grows higher, so I guess she wins thrice.

As for the episode, we knew when Satsuki fixed his recipe that they would win, but Ichigo’s suggestions came as an added surprise, but it was wasted because we weren’t even told until after the victory. Like anyone cares.

I’m still waiting for the mysteries in Sora no Woto 5 to reveal themselves, but instead they give us a mission to check up on the, er, (reading notes) Noctor-type devices scattered around the countryside. Though Filicia prefers to call it a “field trip.”

Filicia and Rio have other things on their mind as well. They’re testing the girls to see how well they can do, and have some field-trip fun along the way. Rio tails them and at one point raids their packs while they aren’t noticing, so they have no compass. 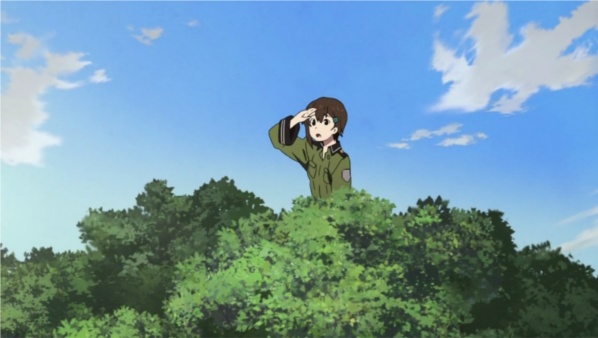 Nevertheless the girls do pretty well, reaching the last Noctor device just at sunset, where, of course, Filicia is waiting for them.

It’s an odd little scene. The walls of the device have inscribed on them the names of all the previous squad girls who have made it there, so in one sense this has been a fun little adventure. On the other hand, just beyond the mountain is No Man’s Land, the edge of the current civilization, another reminder of the war’s devastation. Filicia wanted them to see that, too, not to mention the nearby hot spring. So the show continues to balance innocent adventures with darker themes. Heaven help these girls if they found themselves in a real war.

Baka to Test to Shokanju continues on it’s merry, pointless way. It’s a schoolwide scavenger hunt where you have to answer questions to get the coordinates. The perfect opportunity to have many jokes at the characters’ expense.

It all flies past so quickly, with so many quick digressions, that I had trouble taking it all in and have nothing to say about it. But it doesn’t matter. I like a show that can keep me off-balance like this. And Yoshi’s earnest stupidity has become endearing.