No new story arc for Railgun. (We’re getting a lot of filler episodes these days. I wonder why?) What’s more, it’s not a very good episode. You can predict each scene minutes before it happens.

The girls’ slightly sadistic dorm supervisor is spotted dressed differently, and Misaka and Kuroko follow her to get blackmail information (Well, Kuroko does. Misaka is dragged along). Kuroko has a complete change of heart when they discover she volunteers at a orphanage, and swears to help her win the affections of Daigo, another teacher who volunteers there. So we get the inevitable “get the two together” scenes, which work as predicted (the supervisor is too lovestruck to do anything), but it’s when she acts heroically during an earthquake that Daigo seems to take an interest in her. 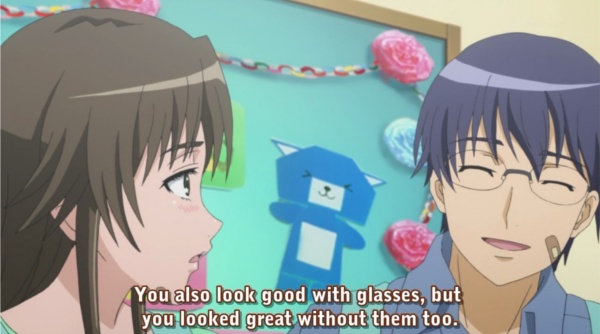 We can see the disappointment scene from a mile away. Daigo only wanted her advice because there’s another woman he wanted to propose to, but I must say he’s certainly clueless about it. He even shows her the engagement ring as if he’s presenting it to her. If I were the supervisor I’d smack him around a bit like she does the girls in her dorm when they miss curfew.

Only two interesting things happen. One, there’s the earthquake. One character mentions that they’ve been having a lot of them recently, which suggests something of a new story arc, or I could be imagining things. The other is Misaka playing with the children, suddenly recalling Kihara’s pain over what had been done to other orphans. That was a nice touch. Otherwise, a completely forgettable episode.

Durarara 5 is up to its narrative tricks again, tossing in bits of scenes and revisiting them later from a different perspective. And now we have EVEN MORE characters to figure out! The ep5 narrator is Masaomi, and most of the episode deals with his current, apparently carefree state, his friendship with Mikado and his crush on Anri, but he crushes a lot, so it doesn’t really matter much. 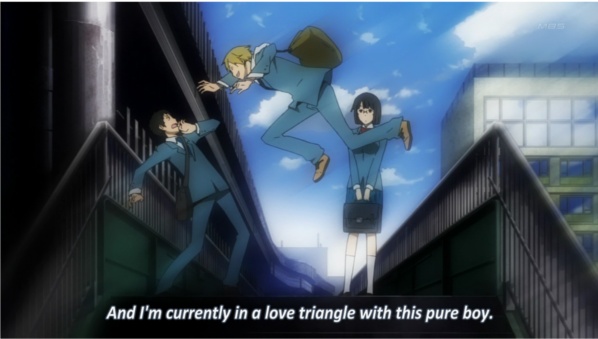 Because he’s interested in Anri, and is jealous of Midado’s interest in her, they spend time defending her against sleazy teachers and listening to her wondering what happened to her friend, Mika. Being heroic boys they decide to find out. Of course, things get in the way, like the Yellow Scarf gang, a slasher we haven’t seen before (who attacks Selty), and the fact that the girl may or may not be the one with the scar on her neck (which would perhaps interest Selty). Oh, it gets so confusing!

We turn aside for some Selty-stuff. After she gets slashed and her wound heals, it cries out “Monster!” which isn’t a nice thing for a wound to do under any circumstances. Not to mention it’s another mystery we have to figure out. And when we flash back to the scene later there’s no time to show it again, since we’re more interested in the slasher getting distracted by the Yellows that had cornered Masaomi, discovered by Mikado, as he tried to chase down who he thought was Mika but was actually scar-girl. As I said, confusing.

But it’s Masaomi’s story, and we learn some things about him, how he perhaps depends on Mikado, like Anri depended on Mika, that he might have been in a gang in the past, and had gone through a depression. It works, and allows us to view him as not just a pain-in-the-ass side character, but one with his own needs and vulnerabilities.

Oh, to complicate it further he loves a bedridden girl (who’s friends with Izaya), and there’s another, a creepy girl who invades chatrooms babbling about love. As usual, we have no clue what the hell they’re doing in this story. Whee!