Cross Game has always excelled in weaving little scenes into a larger tapestry, but now it seems like everything that happens off-field is an annoyance. At least I thought so, until the meaning of the early parts got woven into this week’s game.

The off-the-field part this time comes from Aoba, who we see trying to help the team staff in cooking (a disaster), sewing on buttons (which come undone the next day). She’s beginning to wonder what on earth she’s good at, besides baseball. Kou dodges the question, Azuma tells her she’s attractive, but this answer isn’t much help, and besides, the thought of it doesn’t seem to reach her noggin.

It takes the game, against Miki and his scrappy team, Sena High School, to answer the question for us, if not for her. It’s a pretty good one. Kou is almost unhittable, and Sena’s philosophy is to bend but not break, which is why, going into the ninth, it’s scoreless, Kou has a no-hitter going, and Seishuu has stranded eleven runners.

Now the Aoba effect happens, to her complete ignorance. The second-years are all madly in love with her (or scared of her, or both) and want to win her affections (or have her not kill them), so they manage a three-run rally. That’s nice enough, I suppose, but I can’t see that as much comfort for Aoba, even if she was aware of it.

What adds to the fun is Sena, Miki’s team, almost literally. He pretty much runs it, with his social studies teacher coach’s permission, and is the reason why they turned it around in two years. He absolutely loves baseball and is having a great time. So even though his team loses, he gets a moment of glory, a home run. Though it’s a meaningless run, he breaks up Kou’s no-hitter and shutout. So after the game it’s Kou who has to face Aoba’s fearsome disapproval. Heh. Disapproval is one of the things Aoba is terrific at.

Railgun is definitely getting on my nerves. Ep19 is the third straight filler, no-story arc episode in a row, and it’s mostly the weakest. All the time I was expecting some sort of disaster or attack to happen, but no, it’s open house at the academy. That’s about it.

Scene after scene it went like this. Misaka guides Uihara (who’s beside herself with happiness) and Saten around the school to see various exhibits. “When’s the big thing going to happen?” I kept thinking. Then they tour around some more. Minor characters show up. And we learn that Misaka is going to give a special presentation, one she doesn’t want to do.

This is the big dramatic thing, a Misaka presentation. I thought “Okay, cool, she’s going to blow something up. Maybe part of the school.” This would certainly liven up the episode. And she’s nervous about it, which means maybe she’ll screw up and blow up too much!

No! The show won’t even give us that! Her big presentation is a goddamn violin solo! When did she learn to play violin? And who cares? Blow something up! But the closest we get to that is backstage, where stage fright is getting the better of her, until she meets someone unexpected. 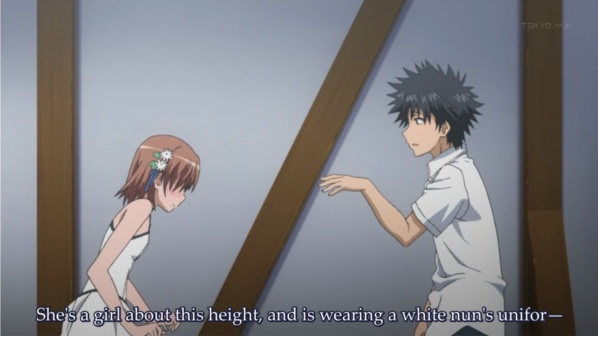 She feels much better after chasing Touma with a chair, she does her solo, everyone’s enchanted by it. The End.

Aw, please! Look, I don’t mind a filler episode or two, but three in a row is too much! Well, next episode I think we’re getting some action again. Please!