For anyone wondering if we’re going to see an actual war in Sora no Woto, ep9 tells us nothing. The peace talks are still going badly, we discover that the frantic person who phoned Rio last week is her father (She hung up on him), and there’s Klaus delivering her an important message (It must be important—it’s in a tube), which she doesn’t open, at least not this episode. All this happens as misdirection to the main story, which is about looking up to people, even when they don’t want to be looked up to.

We think all this stuff I have mentioned is going to be the main thrust of the story, we’ll find out why Rio is so distracted these days, etc, but everything gets interrupted by frantic villagers trying to find a missing kid, Seiya. And it sets up scenes between Klaus and Kureha, who adores him and thinks he’s a famous tank commander. Actually he’s a courier with not much battle experience, and when it looks like they’re about to get swept into the river he finds his, well, I don’t want to say cowardice, but inexperience in a crisis begins to overcome him. Meanwhile, watching the danger from a distance, Rio begins to lose it in front of the other squad girls, all of whom look up to her. 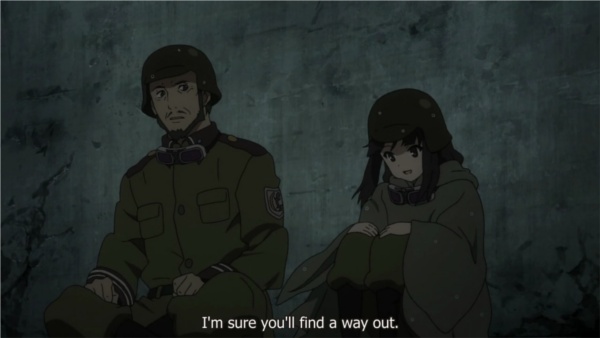 Both Klaus and Rio are redeemed (well, Rio just gets a hold on herself). Klaus saves Kureha’s life, because she knew he would and he couldn’t let her down. The crisis is well-done; I know it because I gasped when part of the house got washed away. It’s a satisfying enough episode, but it doesn’t answer any of the questions we have about the possible war. I believe there are only three episodes to go, so that may answer my question. And there were way too many panty shots.

Hanamaru Kindergarten 7 is a single story this time, rather than two. It’s the week off, and Sakura decides to drag Tsuchida off to see their home town, and invites the tots and Yanamoto as well. Five females and one male.

Naturally, Sakura is playing her little games again. She’s trying to get Tsuchida and Yamamoto together, but I wonder if that’s her only reason. I suspect she’s also doing it in order to mess with Tsuchida’s head some more. Indeed, the first half of the episode is all about messing with Tsuchida’s head, or making Satsuki mad because her brother won’t spend enough time with her. Of course, he’s wrangling three pre-schoolers, so he’s a bit busy. She seems to realize this, but gets mad anyway. I can understand her frustration. For two days she has to see people who are closer to Tsuchida’s daily life alternately praise and mock him, and she’s left out. All she wants is a little quality time with him!

Of course, they make it up and everyone’s happy. But I think they’ve been spending a little too much time with Satsuki the last couple of episodes, and some of the things brought forth, like Tsuchida’s new responsibilities, are retreads from last week. Well, they’ll go home soon. And to close it out, another innovative closing credit sequence, though I have no idea what it’s supposed to refer to. 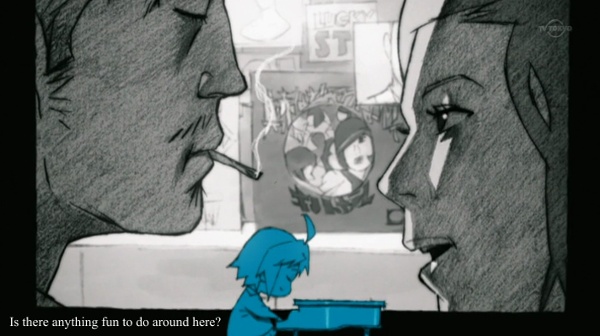