Ookami Kakushi 9 reveals more of the towns secrets to Hiroshi and us, mainly through exposition, and I’m still not sure how wolves fit into this whole thing.

I’m also not sure about gods, and the fallen, as Nemeru says he’s one or the other. The important thing is that gods, or fallen, give off a scent irresistible to people like Nemeru, and Hiroshi freakishly gives off a scent 100,000 times stronger than your average person. Which is why she’s tied up, so she can’t give in to temptation, so to speak. This is when Hiroshi uses his knife to cut her free. I don’t get this at all. I understand why he’s freeing her, because it’s a sign of trust, but why on earth didn’t he free her before he knew the situation? They’d been in there for hours; she’s tied up, he has a knife, yet it never occurred to him to release her? Hiroshi isn’t setting any standards for logical thinking.

Meanwhile the intrigues between the old organization and the hospital continue, with poisoned coffee. And again I am unclear as to what the forces are supposed to represent, except it gives the impetus for the old cult to look for the kids. What’s more admirable is that Kaname has put two and two together all on her own and gets Hiroshi’s father into the search party. Kaname is the smart, resourceful character that Hiroshi should have been. She actively investigates the mystery, unlike Hiroshi who just sort of dithers around wondering what’s going on.

Still, there are some nice scenes here and here. The fathers of Hiroshi and Nemeru meet and you can immediately sense the bond of concerned fathers. Nemeru’s struggles not to ravish Hiroshi (always the victim) are well-done, too.

Speaking of exposition, Railgun 22 sets a record. We have Haruue’s talk in the beginning, then more talk with Telestina, then Judgement has some, and finally Kiyama and that doctor and Telestina. Oh, and we have Misaka musing in the tub, and Kuroko barges in on her. The thing is, somehow, it works. 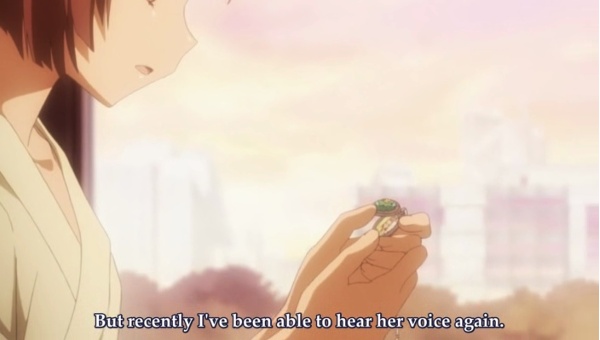 Partly because the scenes vary. Haruue’s opening bit is a touching story about a girl trying to find her missing friend. The Judgement scenes work with discovery and research, and the ones where information is just being spouted work because the information is actually interesting, and so is the overall story. We’ve known about the missing, comatose kids for a long time now. Since they could set off a huge Poltergeist it’s a concern to the characters, and two of the characters have personal reasons for finding them.

One thing that didn’t work so well is Telestina’s claiming of the children, well, that was all right, it was Kiyama’s reaction. She wants to wake up the kids more than anyone, and Telestina has access to data she would need to do just that, so why is Kiyama so upset about it? I can’t imagine that she would refuse such help. Perhaps she doesn’t trust Telestina (I still don’t, either). Or is she so possessive of these kids that the thought of outsiders interfering is anathema to her? Or maybe she will now be out of the loop? Possible, but I wonder that Telestina’s group would refuse the aid of someone who was there during the original experiments.

Baka to Test 9 brings us Akira, Yoshi’s weird sister, who disrobed on the train because she was hot (Kiyama’s soulmate). She alternately deducts points for his living conditions and comes on to him.

One of her rules, if he is to continue living alone, is to do well on the test, and no fraternization with girls, though he can come on to boys all he wants. Naturally this leads to a lot of scurrying around, trying to cover up past indiscretions, and studying like hell, so naturally the gang wants to have a study group at his place. The typical embarrassments and misunderstandings ensue.

And, because he put the correct answers in the wrong spots on the test (wouldn’t the grader notice and not deduct anything?) it seems he’s stuck with Akira for a while. That would be all right, I guess. The show can always use another strange person. But I can’t say the episode interested me very much.