Kimi ni Todoke 22 shows us Sawako’s biggest weakness: the fear of hurting or disappointing people, even when she’s perfectly justified in doing so. But it’s a Christmas episode, so it’s all happy in the end. Really, a Christmas-themed episode in March is just the wrong time. By now I’m thoroughly sick of anything having to do with winter.

Kazehaya plans a Christmas party for all the class members who won’t be with significant others on this romantic holiday, which apparently means the entire class. Sawako, of course, is just happy to be invited, as the first part of the episode shows us over and over. Moreover, Kazehaya really wants her to come. But her family takes the holiday very seriously, and she can’t bring herself to desert them.

I suspect that even Sawako’s doting yet clueless father wouldn’t object if she hit the party, since they’ve been worried about her lack of social life for years. This doesn’t occur to Sawako, and once again she hurts herself by clamming up. Worse, dear old dad mistakes Kazehaya’s gift for his own, and while she says nothing, at least this time you can’t blame her.

Another maddening thing about Sawako’s passiveness is that she can’t control the action. It was a problem early on in the series and it comes roaring back here. It takes a phone call from the party and Sawako’s breaking into tears for the parents to see what’s going on and let her go to the party—which is over by the time she gets there. At least Kazehaya has decided to wait for her. But again, it’s him taking action, not Sawako. Well, Christmas episodes are usually lame, anyway.

Compare Sawako’s lack of action to Mikado’s actions in Durarara 10, or rather, his learning when to act. It starts slowly, with Mikado wondering what to do about the strange girl in his apartment, when Masaomi hijacks him to ask a classmate if he’s a member of the mysterious, dreaded Dollars gang.

Mikado is the passive one here, but when the classmate freely admits to it and offers them chips, he begins to see that asking questions might be the best way to behave, which sets him up for his meeting with Celty and Izaya. In addition, Mikado’s finally doing what he came to the city to do: live a new and exciting life.

When he meets Celty, certain she’s up to no good, he asks questions and she tells him everything, even showing him her lack of a head. When they find the girl gone and after Mikado is attacked (Celty and Izaya chase them away), he becomes energized. Jumping onto the computer and logging into a chat, while texting with his cell, he announces that he “holds all the cards.” Mikado, with his information and new friends and colleagues, and because he dared to ask questions, becomes confident. Just what he knows I wish they would tell me. There was probably some five-second bit several episodes ago that I’ve forgotten …

Speaking of main characters who are active or passive, let’s visit Ookami Kakushi and see if Hiroshi, the current king of dithering, manages to get his ass in gear …

Actually, this time Hiroshi’s worries make sense. If he’s that irresistable to certain townspeople, maybe he shouldn’t go into a crowd of them. But he goes anyway, and the shit hits the fan. Sakaki turned Issei’s would-be girlfriend and she goes beserk at the festival, leading Nemeru in scythe-girl mode to kill her, leading Sakaki to appear and accuse the town of being full of monsters. 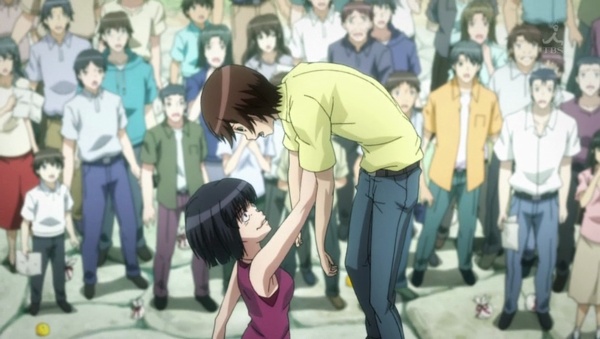 I still don’t fully get who’s what type of being, but I do understand that the town has been offering a cheap way of life to bring in innocents to live, so they can get eaten, or something. But apparently what he really wants to do is open the dam and engulf the town and kill … whatever sect he wants kill. Sakaki’s turned into a fine villain, but his head isn’t screwed on too straight.

As for Hiroshi, well, in the previews for next episode he declares he’s gonna DO something, by gum! But in this episode he’s doing the usual, standing on the sidelines, getting attacked, threatened by townspeople, and protected by Nemeru and Isuzu (welcome back). He may hate being powerless, but he still hasn’t figured out what to do.