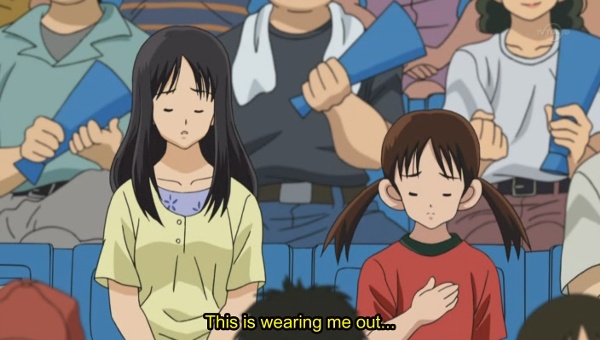 Cross Game 49 is indeed excruciating to watch. You may think, well, it’s a sports show, so it has to end with victory, but this series has as many letdowns as triumphs. There would be a certain beauty to it if Seishuu loses, and Kou, Aoba and Akaishi don’t realize their dream of playing in the Koshien. There’s no guarantee that they’re going to win the game, and in fact, the game doesn’t end this episode, so we have another week to wait.

While almost every scene concentrates on the game, we get some thoughts about the past. Not only Wakaba’s tragic death, but what happened last year when the two teams met, and Ryuuou won in extra innings. The slugger Mishima remembers it well. So do Kou and his team. But Wakaba is there as well, and later, when the game indeed goes into extra innings, Cross Game eases on the pressure pedal and we get a few moments of memory. Aoba remembers Kou crying. Kou takes out a batting cage token. We see the river Wakaba died in, the spot where Kou and Akaishi always train. At this point we really need to see these moments, because the game, as I said, is excruciating.

We can see the strain and wear on the Seishuu players. The uniforms get dirtier, the faces marked with grime and sweat. There are lucky hits, errors as well as great plays, strikeout after strikeout. After eleven innings both pitchers are still in there—which shouldn’t be permitted. These are still young, still-developing players. They shouldn’t be allowed to extend themselves so much and risk injury. But in the interest of drama I’ll let that pass. Besides, would you want to be the one to tell Kou he’s being relieved? The way he’s pitching?

There are little battles, some laced with irony. Azuma tells Kou that he can do anything today. Moments later a Mishima homer goes foul by centimeters. His subsequent line drive is caught by Azuma. Kou apparently homers off of Oikawa, the opposing pitcher, well, they don’t really officially say it, and the episode ends right there, but I assume from the camera angle of where the ball went that it was fair; they used a similar trick to show that Azuma’s was foul.

Through it all the players on both sides don’t lose their focus or get too optimistic. They are competitors. They know how good the other team is. They won’t let up. A moment or two of jubiliation is all they’ll permit themselves.

And the other characters? They watch and comment. Aoba and Junpei Azuma have some terrific moments as they watch. When Yuhei Azuma hits a triple, his brother is ecstatic. Aoba looks at him, enjoying his happiness. Akane and her parents watch from the hospital. There is nothing any of them can do. And neither can we. And the game isn’t over.

Next episode is the finale. How they’re going to handle the game and all the romantic angles in such a short time is anyone’s guess. It’s not like this series to cram too much into one episode.

Nodame Cantabile Finale ends next week, too. They too have a lot to cram in, like what the hell is Nodame going to do now? 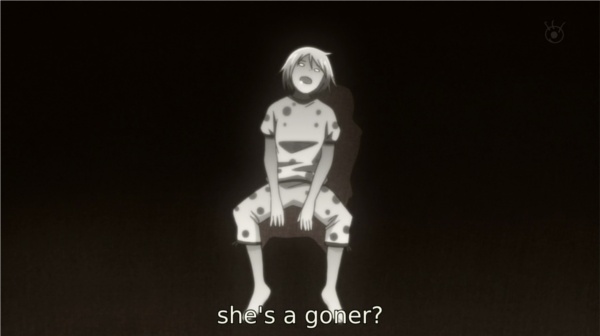 This episode is all about the fallout from Nodame’s debut in London. It quickly got posted in YouTube and now music lovers the world over have seen it. Word quickly spreads to Japan and Paris, to the delight, bewilderment and consternation of the other characters. But the effort seems to have drained her of all passion. She had vanished from Paris, and now she vanishes again—to Egypt??

While people look for her, Auclair runs into Stresemann and admonishes him, but I’m not sure what his point is. Auclair says she was nearly at the point where she was living in music, and that Stresemann screwed that up. But how is getting Nodame to perform with an orchestra screwing anything up? She’s playing music, after all. Perhaps such a big scene was too much for her in her current state, and Nodame’s behavior certainly suggests he could be right, but surely wanting to hide afterwards is a normal reaction for someone new to this. She’s just recharging. Meanwhile, Chiaki can do nothing but brood on what he did wrong and wonder if he’s been dumped, romantically, and professionally.

Nodame returns, after discovering she has fans in Egypt, and a weird moment happens. Tanya and the others start barraging her with questions, and she can’t even look them in the eye. However, kids of Chiaki’s orchestra members have come over, and seeing them she perks up and begins to play with them. Chiaki has wondered if she would have been better off in Japan, away from the stresses of professional music, or maybe this is just he way of recharging her batteries. It does leave a lot to resolve in one more episode, even if Chiaki has decided he will say yes to her proposal.

Letter Bee 23 offers one half of boredom and the other as bewilderment. Connor and Niche are captured by the mob. Lag escapes thanks to Hunt, the monstrous guy who isn’t really a monster, blah blah blah. He’s led off by Ann Graad, who feeds him a backstory I don’t fully understand, but she suggests that Gaichuu are attracted to the sealed hearts in letters, which would explain a lot. Oh, Sarah and Hunt are scam artists, but we knew that.

There’s an equally confusing talk between Connor and Hunt. Normally I would just mutter to myself, but this is the first time I can remember that Connor is good for something. He gets Hunt to talk out, and his completely useless dog turns into a superb burrower. About time those two got to do something besides be fat and lazy.

A gaichuu shows up and starts attacking. The townspeople, thinking the Bees and the government are responsible for them, prevent Lag and Connor from fighting back. So, naturally, they throw in a completely unrelated character …

Strolling into town like Clint Eastwood, Zazie clobbers the gaichuu. While I’m glad to see him, don’t ask me what he’s doing here. Don’t ask me what the backstory is. Don’t ask me anything about this episode. It was dull and senseless with a little action at the end.