I guess I needn’t have worried about the outcome.

First, a question. Mishima is at the plate with a runner on first and two outs. He’s forced Kou to a full count. He takes ball four. This is good for the Ryuuou team, right? Two runners on. A chance not only to tie but to win the game in the twelfth inning.

The laconic Mishima meets his laconic opponent/counterpart Azuma at first base.

“Yes, after you let the pitch go by,” says Azuma.

Meanwhile, the Ryuuou coach says “Have you ever seen Mishima lay off a close pitch when the count is full?”

So my question is: Did Mishima not swing because he was frozen by Kou’s fastball? Now that I’m writing this and thinking through it, probably so. Junpei Azuma, in the stands, says to Aoba that Kou’s pitch was his fastest yet. The previous fastest was 158km.

Which brings me to just another moment of beauty in this series: they don’t put that pitch’s speed on the scoreboard. Aoba famously said that she’s only interested in men who can pitch 160km. No one will ever know the speed of Kou’s fastest pitch.

For fifty episodes Cross Game was full of beautiful moments like that. So few of them made you gasp or cry or cheer. There is only one tragic event–it happens in episode one. Everything else consisted of day-to-day events, minor things that happen to people as they grow up. Memory, and uncertainty.

Uncertainty in more than one way. The outcome of the game is uncertain. Akaishi and Mishima (Opponents, but true baseball players) talk at the plate. They both realize that this is the moment. Everything has been leading up to this at-bat. But who will triumph? “That’s precisely what makes it fun,” says Akaishi. At least in a baseball game you get an outcome. One team wins, the other loses. That’s not true in real life, and the series doesn’t fully answer what will happen to Kou and Aoba, though we can make an assumption.

Early on I didn’t know if I liked the Kou/Aoba pairup. I imagined them later in life being an old bickering married couple. Kou the henpecked husband, Aoba the shrew who can’t cook a decent meal, but I’ve gone past that. Kou knows Aoba. He’s supposed to be the great liar, but he knows Aoba has been lying to herself for years about her feelings, that they equally share a bond, the memory of the long-lost Wakaba. Is such a bond enough for them to begin a relationship? That’s one of the things I don’t like in many series such as this one. The couple get together in high school, for crissakes, and intend to spend the rest of their lives together. The reality is that there’s a whole world for them out there, new people, new experiences, and people grow more. Well, Cross Game, it should be said, makes no such adolescent promises, but it is inferred. 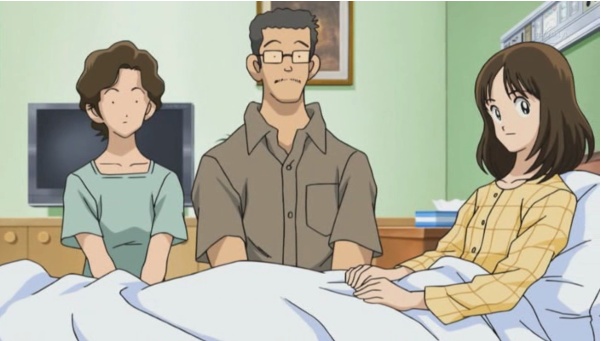 And the fact of their bond over Wakaba is brought home by Akane, who has told them both that they should talk more together about their memories. Kou thinks Wakaba might have brought Akane to them in order to tell them what she wanted to say, implying that she gives Kou and Aoba her blessings. Akane, in a much earlier episode, wonders aloud if she was meant to meet them. As for Wakaba, Kou says that no one is really dead until they’re forgotten. Wakaba isn’t going anywhere.

Also uncertain is Akaishi and Akane. All we know is that the road is clear for him to make his move if he wishes. And I suspect Akane is wise and gracious enough to know that she cannot replace Aoba in Kou’s heart. So why not this burly son of a liquor store owner who’s obviously in love with her? We’ll never know, but I like to imagine it happening.

Some things they actually had to rush. Junpei and Ichiyou’s wedding happens in the closing credits. Also while the credits roll Aoba has one more speech about Kou knowing all along. Kou and Aoba holding hands, both stubbornly refusing to let go no matter what the other one thinks. 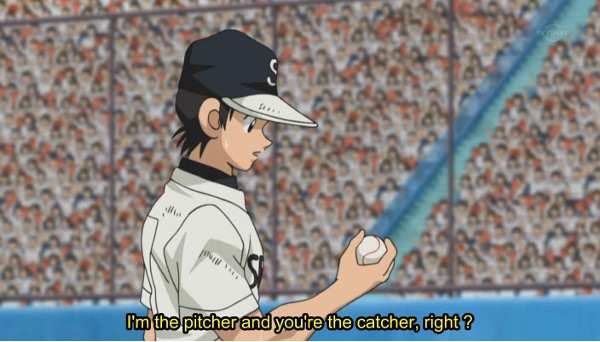 One piddly complaint. Wakaba’s dream was for them to play in the Koushien. I never expected to see the games, but I would have liked to see them in their places, Kou as the pitcher, Akaishi as the catcher … Well, it was an impossible dream, wasn’t it, since Aoba would not have been allowed to play. Maybe there’s a point to be made: the dream was just that—a dream. It might help get you places, but it never quite becomes reality. Interestingly, Coach Maeno is seen muttering “This is a dream … No, this is reality!” Or maybe I’m thinking too much.

Indeed, it’s hard for me to put this series in perspective. I’ve watched it for a year, enjoying its quietness while other shows whizzed by–and entertained me as well. Some of them are great shows. You know them. But a few months ago while thinking about my anime of the year list, I thought I might put Cross Game on top. Constant excellence had won me over. (In the end I didn’t rank them). And a reply from Usagijen had made me think. I didn’t just love this series, I was married to it. Much like the relationship between Kou and Aoba had slowly warmed on me, however it might turn out, the series itself slowly took a larger and larger chunk of my anime-fan heart.

I’ve heard people complain that the baseball scenes were laughable compared to other such series, and the animation of course was never fancy. I’ve heard that creator Mitsuru Adachi has been repeating himself for some time. But when it turns out like this, so breezy, well-constructed, gentle and touching for an entire year, no one has any real cause to complain. Well done, and thank you.