Nodame Cantibile – Finale‘s, er, finale is uncertain, with things left up in the air while also trying to give us some closure for the side characters. The manga’s creator, Tomoko Ninomiya, fell victim to some physical ailments, not to mention pregnancy, and you get the feeling that later, sporadic efforts to continue the series left it rudderless. We will probably never know how she intended to finish the series. This is all we get.

The biggest casualty is Nodame and Chiaki. It was assumed that they would become an official couple, well, I guess they did, but then there was the recent strain in their relationship, and the episode does little to clear that up. By the episode’s end Nodame is off doing her things, another concerto, another recital. Her career’s taking off. Chiaki is there, watching her perform at the very end, but you don’t get the sense that they’ve completely made up. She says she always thought these feelings about performing music came about through Chiaki, but she’s discovered she can do it anywhere. So now, in the very last episode of the series, where is their relationship?

Interesting that while Nodame’s career grows, Chiaki is stuck with a little-known orchestra doing gigs at onion festivals. 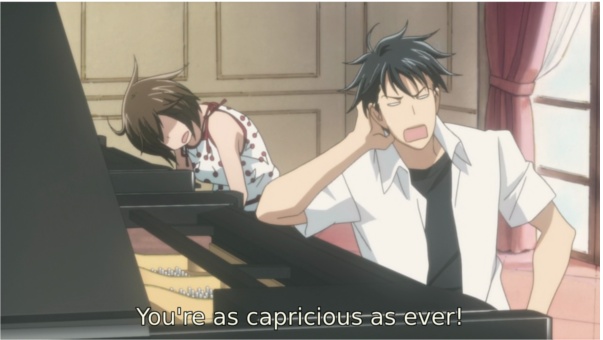 It’s even odder because they do get together earlier in the episode. Chiaki bursts in and announces he wants to do a concerto with her. She’s worried that she won’t be able to match her London performance. So he drags her off to his family’s villa where he has her do a duet. In a splendid nod to the beginning of the franchise they play Mozart’s sonata for two pianos, the first piece they ever played together—then Nodame jumps him. It’s a great scene, reminding us of the mutual love they have for music, while reminding both of them how the other has matured and improved. But what does it lead to? Are they now just two busy professionals who can’t find the time for each other?

We say goodbye to the side characters. Yunlong returns to China. Tanya stays in Paris and they insinuate that the relationship with Yasunori is going well. Frank and Rui are playing together. We get glimpses of the gang in Japan. In all these cases it does feel like closure. But for the two main characters this story feels supremely unfinished.

Still, it was a good series. I thought it better than the Paris Chapter. It felt more focused and looked better, especially the concert scenes. As for Nodame and Chiaki, well, I see in Wikipedia that a new installment (Nodame Cantabile – Opera Hen) is coming out. Maybe this isn’t the finale after all.

Hanamaru Kindergarten‘s finale again demonstrates what I’ve said: the stories are better when the kids are involved. For this reason, part one works better than part two. Anzu has a christmas wish dream. 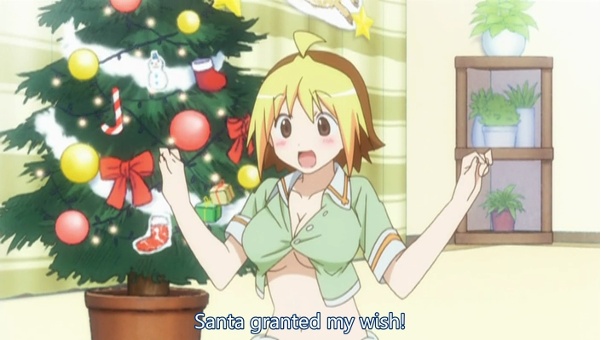 All kids Anzu’s age have wild imaginations, and it’s always fun to see just how Sakura’s raising of Anzu has affected her’s. It livens up what is actually a predictable sequence. She goes out to find Tsuchida (dressing first, thank heavens), they meet up, is it destiny, etc. But lucky for us the other characters show up, too.

And it’s a lovely touch that when she wakes up, with her friends and parents around her, she is delighted to be with them. Like anything disappointing was going to happen.

The second part combines more memories of Sakura and Tsuchida in school, and adds to that another attempt at confessing to Yamamoto. He told her not to give up on the guy she loved and go for it. Now, Sakura’s told the same thing to Anzu. Go for Tsuchida! 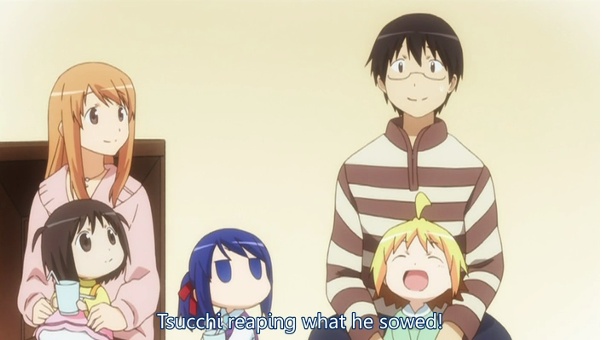 Later, Anzu tells Tsuchida he should do the same thing to gain Yamamoto’s affections, once again tripping up her own plans. Only Hiiragi sees the irony in this. And once again Yamamoto is too clueless to understand that he’s confessing. We’ve seen this before and we know how it would turn out. So Hanamaru’s finale is uncertain as well. If there will be another season will it play out the same stories over and over again? If so, I’m not certain I want to watch. I had a good time with this series. It was often amusing and always cute. The closing sequences were always something to look forward to. But if it’s going to be more of the same I would eventually tire of it. Twelve episodes is a good place to stop.