In Giant Killing 3 Tatsumi continues his unique style of managing, by apparently not managing at all. Leaving the players for “self-practice” the squad immediately breaks into factions and bickering, and we are introduced to some more of them. 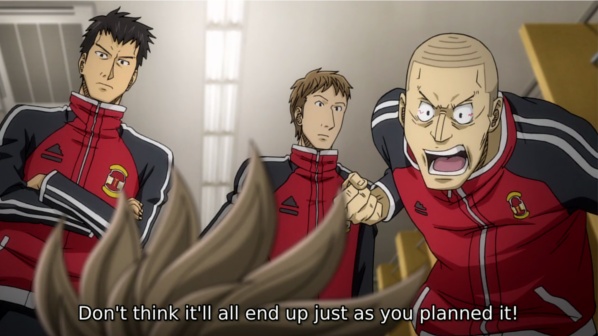 Kuroda is one of them. Now that Murakoshi is no longer captain he can’t boss people around, but Kuroda has no problems taking on the role himself. But the others won’t follow his orders. Interesting sign. And Tatsumi, watching under cover, sees it.

But they do pay attention to Yoshida, i.e., Gino, or “The Prince,” a prima-donna Italian whom we haven’t heard anything about, yet. When he walks onto the pitch, late, the bickering stops while he has a chat with Tatsumi, who notices the effect he has on the players. Interesting sign, again.

Still, we don’t know what the hell Tatsumi is up to. I don’t think he really knows, either. He’s too busy observing the dynamics of his team for now, and doesn’t care if they start fighting or not. He tries to explain it in a locker room scene before a preseason game, but it makes little sense. The players found their own ways of accomplishing things which were better than the old way, or something like that. On day two he still isn’t doing much of anything until he orders Gino to play instead of just running. Gino picks his team and the opponents, mainly old regulars, and shows off his passing, scores, leaves the pitch laughing. Next thing you know, he’s the new captain.

Speaking of captains, Murakoshi isn’t used much in this episode. Well, we had a lot of him last week. He seems to be biding his time, thinking things out, forcing himself to work with Tatsumi’s plans, even calling off Kurada when he gets too angry.

Next week there’s that preseason game with the defending champs, Tokyo Victory. You get the sense that no one really knows what they’re going to do out there. The previews suggest we’re going to get a lot of rookie Tsubaki and his struggles.

Distracted by Bateszi’s appeal for us to watch Tatami Galaxy, I went over to Funimation’s site, but I can’t get screenshots that way (Hey Bateszi! The first three minutes look great!), so I’ll watch it for review later. Instead I will choose B Gata H Kei. Probably a mistake.

Okay, it wasn’t horrible. Three episodes in it hasn’t managed to drive me away. The trouble is they’re going to run out of routine high school comedy activities to do at this rate. This week it was the school festival, with a beauty contest, and next week it’s Christmas …

But we start with fumbling around in the dark, with two variations. Yamada learns that Kosuda is in the photography club. He innocently invites her to watch him develop pictures in a darkroom. There isn’t much to this scene. The red light goes out and, fumbling around, Kosuda touches her boob, which makes her react not in a way a sex-starved girl should react. But it does plant a seed for the school festival scenes.

Yamada’s plan this time is to attack Kosuda in the haunted house, but he never shows up. There’s not much to this scene, either, and they quickly move on to the beauty contest, which Yamada barely wins over a new transfer student (and obviously a new character). As usual, this triumph works against her. She wants him to realize her beauty, the trouble is, he already does, but doesn’t think he stands a chance with her now.

It’s when both characters overcome their exterior beliefs that they come closer. The picture-taking session showed Yamada that Kosuda has a sensitive soul, that there’s more to him than just an object of lust. She inadvertently got into one of his photos, and he realizes he wants to dance at the bonfire with her, even if he’s not at her level. When they finally do dance it’s a genuinely sweet moment of two kids having fun, with no ulterior motives.

Mayoi Neko Overrun 3 works about the same as the first two. There are some nice scenes, but they feel like a late draft rather than a completed project. 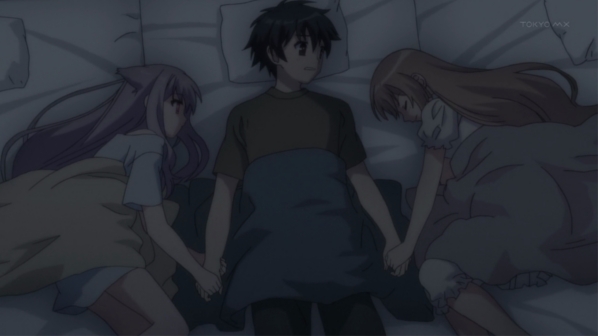 The typhoon is raging. Takumi and Nozomi are chilling at the house, talking about their past. Fumina shows up out of nowhere, obviously concerned about the two of them alone, and they end up spending the night. It takes a lot of time, with some clumsy jumps in time, but all in all it’s not bad … but very little happens, except that Nozomi comes to the conclusion that she’s a burden, and she leaves the next morning before they can wake up.

Everyone rushes around trying to find Nozomi, leading to what is almost a splendid scene between Takumi and Fumina, the latter guilt-ridden, believing she’s the reason Nozomi left, because she didn’t want to interfere with Fumina and Takumi. It winds up with her confessing she loves Takumi, but of course she always lies about her feelings, so, completely rattled, she jumps from “I love you” to “I hate you” to “Die twice,” and back and forth. It’s well-handled by Fumina’s voice actress, but the talk leading to it again meanders and at one point is interrupted by plot. Well, instead of a splendid moment it’s only a very good one.

The same goes for the final scene, when they find Nozomi, and Takumi delivers a long speech about his past, about being an orphan, in urging her to return. It IS a touching moment (though a bit early in the series for such a scene, just like Fumina’s love declaration), but at one point Nozomi demurs, and Takumi almost begins to repeat the same speech, or at least that’s how it felt. (“After all, I’m an orphan, too …” Wait, Takumi, didn’t you just say that?).

Well, it was still a nice episode, and we get some revelations and backstory. It was interesting to see Nozomi sad and vulnerable, obviously missing her new family. We don’t learn anything more about her own mysterious past, however.