Mayoi Neko Overrun 4 drops almost all pretense of story and, well, I’ll let the screenshot set it up for me.

Once there, naturally, Ieyasu sets off Chise’s anti-peeking device and the boys are blasted, naked, into the mountains, where their adventures begin. Meanwhile the girls indulge in the usual hot spring activities and show off a lot of skin. By now the episode resembles one of those end-of-season, comical filler ones like Ookami Kakushi did, only this show is a comedy to begin with. It’s incredibly odd. 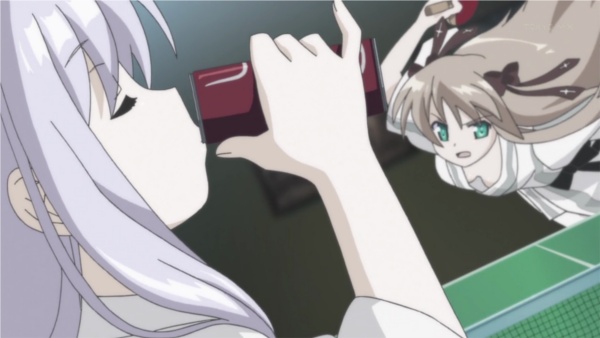 Topping the weirdness is a ping-pong match between Fumino and Chise. They hit the ball slowly for over a minute while a slow jazzy tune plays with vocals by a Japanese Louis Armstrong. Finally the match becomes more intense, and the viewer is given a chance to peek down their yukatas. You get the idea that they basically had time to kill. Well, I’ve seen worse time-killers than this, even if you dismiss the fanservice.

Speaking of which, the boys become separated, and Takumi is rescued by a girl named Kaho, who also winds up naked. I’m not sure what to make of her. Takumi doesn’t know, either. She was seen spying on the boys, then shows up in her mountains claiming she’s lost, too, then guides him back. After getting touchy-feely with him.

All this is quite a surprise after last week’s emotional scenes. Nozomi is given nothing to do but stand and watch the other characters and meow into a fan. It wasn’t a bad episode for what it is, but four episodes in I’m still having trouble figuring out what this show is all about.

Working!! 4 is another mishmash of events, and as usual some of them hold up and some don’t. 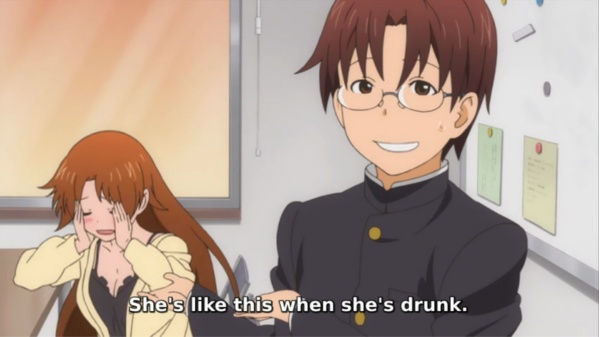 We start by meeting one of Souta’s sisters, drunk and passed out outside the restaurant. Later the show loops back and we meet the other three. It’s the most successful part of the episode; we learn a lot about Souta. His older sisters are successful women, a lawyer, a novelist, etc, and the younger one is probably the smartest of all of them. Not only are they outstripping Souta, all but the youngest sister are taller than he is, and the young one is his height and only in elementary school. There’s no way he can win against them. It also might explain why he likes cute little things in his life—he gets so little of it.

Most of the other scenes involve Souma, and don’t work as well. Probably because we learn he is quite an unpleasant person under that smiling persona, finding dirt on people and blackmailing them to do his chores. He tries to manipulate the yachio/Satou dynamic for kicks, but it doesn’t work, at least for me, because I don’t understand what that dynamic is. All I know is I want to punch him out. Well, luckily for me …

He can’t get any dirt on Inami because she punches him before he can get a word out. Thus the situation is balanced. Overall not a strong episode, but a decent one. Even the weak sections are over so quick I don’t get too irritated.