We’re eight episodes into Giant Killing, and the team hasn’t won a game yet. I believe this is only a 13-episode series. Will they go all the way to the final episode before they win? It’s starting to look like it, though in the match this episode ends with they’re only down 1-0.

Oh, things happen. Players get turned around, but they’re still not succeeding. First it was Tsubaki and Murakoshi, and now it’s Kuroda and, er, the other defenseman. Are we going to go through this for ever character? Kuroda’s pretty much walked off the team and his friend follows. Dori, the goalkeeper, has given them words of advice, and now they sit and watch the games and for the first time try and figure out what the problem with their play is. In a ludicrous scene they even take inspiration from a ramen shop owner. “Forget your failures and move on!” And, okay, the next match they do indeed play better. Kuroda even pep-talks a defenseman who thinks he’s let in a goal, something he earlier would have yelled at the man for. So I guess they’re turned around. But the team is still losing. 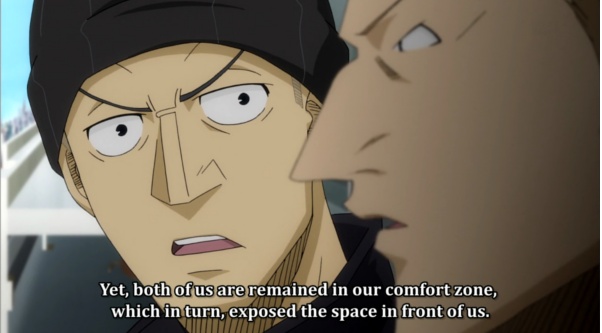 The other players on the field can’t stop screwing up, either. Tsubaki has gotten no better. Gino doesn’t care either way, and the replacement defensemen are doing the same things that the regular starters did. Every time they start a new match you have to think “Yes! This is the one they’ll win!” but so far …

It’s getting frustrating to say the least. And it’s become clear that Giant Killing is intended to be a much longer series than thirteen episodes. At this rate I’ll be lucky to finish the first one.

Mayoi Neko Overrun likes to get a little odd at times. In ep7 they go completely bonkers.

The entire episode is like this: a mecha adventure show with all the characters playing heroic roles. They’re fighting against Duke Machine, who wishes to become emperor of the Machine Empire and is going to suck up the Earth’s energy to do it. All that stands in his way are the Brave Bravers, or something like that.

And it doesn’t really work. First, they do TOO good a job at imitating an old-school mecha show. All the cliches are there: determined words, evil laughter, moments to recollect tragic events, an old enemy turned ally to fight the bigger menace, the all-hope-is-lost moments, more evil laughter, robots transforming into unheard-of new forms, all done in a clunky old-fashioned style which made me check my watch. Second, the characters play straight-up heroes and bear no resemblance to their regular roles, so we lose their quirks. They don’t even use their real names. There was, however, one exception, the only moment that got me laughing:

Look, I appreciate the show’s reach and I hope they keep it up, but I believe this episode failed, maybe not as a concept, but in its execution.