Yumeiro Patissiere 33 concludes the battle between Team Ichigo and Team Natsuki, i.e. the tropical girls. It’s a little odd because it’s so straightforward, or maybe predictable is the name for it.

Team Natsuki, a team with not only no animosity toward Ichigo (Just like the last group. Apparently all the classless teams were eliminated) but with such openness that they let Ichigo taste their creation before the competition, is going to be a difficult challenge. Naturally, Ichigo despairs for a while, then tries to come up with fruits (in a huge orchard on the school grounds she’s never even heard of before) that won’t play to Natsuki’s strengths, until Kashino sets her straight. And bingo, she has a concept. But, perhaps because there isn’t enough in the story with just the competition, they had to give Ichigo some self-doubt and pre-contest jitters, which isn’t fooling anyone who’s watched the show for so long. We’re basically waiting for the competition to begin.

It’s like the others we’ve seen. Nothing interesting is added. Not only that, but they draw everything out to extremes. Ichigo lacks focus before it, but soon sets to work making macaroons. The performance aspect, well, Natsuki had that hands down. And there’s the presentation and judging, which took forever, dramatic pauses before each category score is announced, math being quickly done, heartbeat noises. Guess who wins? 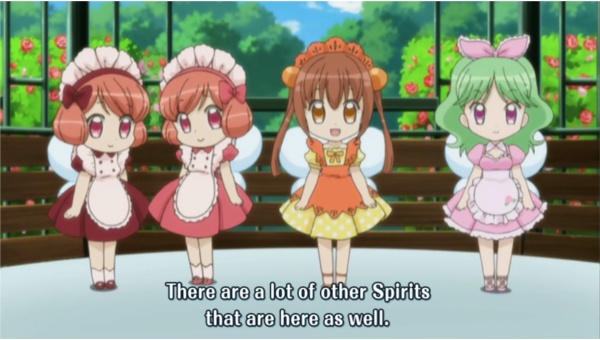 I suppose that since this contest means more they felt they had to milk out every moment, but it didn’t work. The episode lacks the quirky charm that others have had. The only thing they can do to liven it up is to reveal that Team Natsuki also has sweets fairies. That’s nice. I wonder if we’ll ever see them again. Story-wise, Natsuki’s girls were pretty much shoved to the side. I guess that being friendly and open isn’t dramatic enough. Well, judging from the previews Ojou’s coming back, and she might have gotten a sweets fairy of her own. Must be breeding season.

Sometimes Mayoi Neko Overrun works, sometimes it doesn’t, but at least you never know what to expect. This one is more straightforward, and they handicap it by removing all of the boys and instead concentrate on the girls. Actually, that’s not much of a handicap …

Otome has brought in another stray girl, named Honoka, a quiet little thing who does nothing to move the action along. All the action is brought by Fumino and Chise, and it’s all mindless bickering. They fight about what Honoka’s all about, fixing the doorbell, and other things that don’t matter at all to anyone. In short, nothing happens except them fighting, while Nozomi and Honoka stand by and watch.

It gets tedious pretty quickly, especially when you realize they’re not going to give us Honoka’s backstory until late in the episode. The only breaks from this are frantic, unanswered phone calls to Otome, and Nozomi’s kindness. She’s about the only person there who tries to make Honoka feel welcome, even baking her a cake.

When Honoka’s mother comes to pick her up both Honoka and Nozomi are a little sad about it. Honoka has learned she’s not bad with cats, and Nozomi (and later, Chise and Fumino) ponders the concept of having a home to go to. So the underlying theme, that of a place where people with no homes can go to, comes through. I just wish they had done it without twenty minutes of bickering.