I’m not going to say very much about House of Five Leaves 11, because I’ve lost track of the backstory, that is, the events that led to Sei becoming Yaichi, if that’s the case.

In the present day, the Five Leaves gang collectively feel that the end is coming. Ume no longer needs the money. Their latest kidnap victim is in their basement, and they are told by the house that the man comes from that they don’t want him back, just kill him. This sets Yaichi off, and he’s been acting odd anyway. 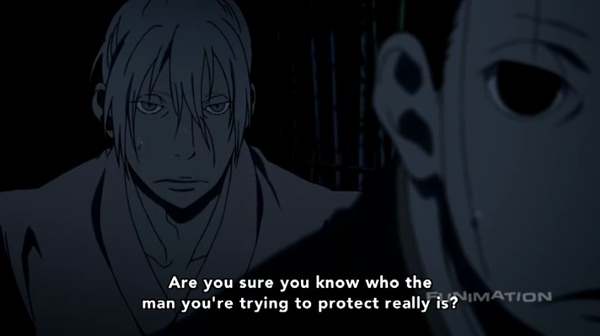 And then Jin shows up, prepared to kill Yaichi, but Akitsu’s presence scares him off. And Akitsu winds up asking Yaichi a lot of questions about Five Leaves, one of which, about the past coming back, enrages Yaichi. To show how much Akitsu has developed over the series, Akitsu announces he’s going to talk to Elder to get his answers.

When he does, I begin to lose track. The flashback we get shows Yaichi killing a sworn brother because another sworn brother attacked a rival gang boss, and Elder is involved (the one other time he’s seen Yaichi). Yet the night scenes in this series are so murky I have trouble telling who is who and what their relationships are. Well, we have the motivations that set up next week’s finale.

I expected to be confused by Ichiban Ushiro no Daimaou, in fact, I wanted it. I wanted a huge climax with explosions and weird cosmic things happening. The finale had all of that, but in the end it felt like a letdown after the craziness of the last two episodes.

First, Akuto has to defeat Braver/Hiroshi, who has decided he’s on the side of the status quo. Apparently Hiroshi believes Akuto is following through with his destiny. Then it’s Yamato’s turn. Yamato’s whole schtick is that he wants to control the God Suhara himself for the sake of the Law of Identity, who happens at this time to be Keena. This means kidnapping her, though before, in her other mode, she was coming peacefully. Both Hiroshi and Yamato are people working on the wrong side for noble ends. Yamato especially. He’s betraying the system for love. Akuto defeats them both with an even bolder plan.

We know he intends to destroy the gods; it doesn’t bother him to learn (from half and android that Yamato sliced up) that the Demon Lord is a proxy set to destroy humanity on the gods’ behalf. So going against them isn’t just rogue act, it’s probable suicide. Peterhausen the dragon and Keena (naked, as usual) come along without fear as well. Here’s where the cosmic stuff happens, like Peterhausen sprouting cables to link into the computer (that looks like a giant tree), android girls with bows and arrows, and we’d already seen the staircase that twist like DNA, Keena meeting her law-identity self (fully clothed) in some other dimension …

And, as I said, it’s a letdown. Big light shows, explosions, etc. And when it’s all over everyone thinks except for the core characters that the Demon Lord has been defeated. Things go on at school as normal, everyone behaving the same way, except the school is in ruinous shape. Akuto even sees the career predictor again, who tells him—he’s going to be a demon lord. In other words, nothing much has changed. We have to wonder if the gods actually died or not. Maybe they have a sequel planned. I wonder if it’ll be worth watching.

This series was … all right. Not a keeper. But I watched it through and was entertained much of the time. But if they can’t reach an actual conclusion I wonder if there’s a point to watching it more, or watching it again.