In Heroman 17 we meet the mysterious figure whom we saw at the end of last episode, obviously a precursor to a new story arc, but this episode turned out to be a one-off with consequences coming later.

There’s not much to the first half apart from a few quick scenes of the new villain’s ruthless treatment of anyone who gets in his way of raiding scientific labs. Beyond that it’s all talk. Denton brings Joey and Psy to his own lab and talks about the raids, kept hidden by the government. Then the scene stops dead until Lina has to leave for cheerleading practice. Why not let Lina in on the further details? She knows so much about them anyway. Besides, she might have come in handy when the villain appears on his mission to destroy Scrugg technology. You guessed who he is, yet? 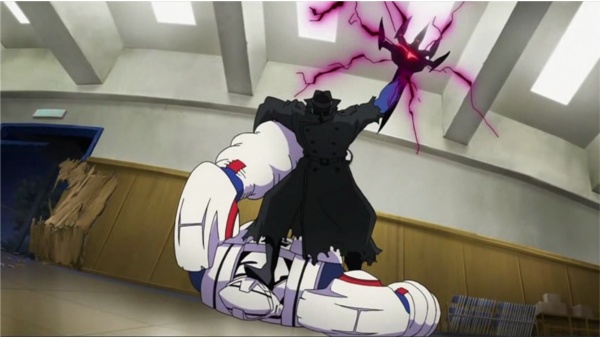 There is a battle in the school gym. This one is also slowed down by talk, as Joey is spotted by Ms. Collins outside and given a lecture and Heroman has to hide. When they get back to rejoin Denton and Psy the battle is … okay. This is a pretty formidable Scrugg we’re dealing with. You guessed yet? Yup, it’s good old Will, only he’s gotten nastier. He gives some odd speeches about being the darkness to their light, then destroys the suitcase full of Skrugg tech Denton had salvaged. It’s hard to say what’s going on with him. Going around destroying the technology is a logical thing for him to do. But he hurts people in order to do it … yet when he is about to kill Psy, he doesn’t. Lina’s name also sets him off. This is one confused villain. 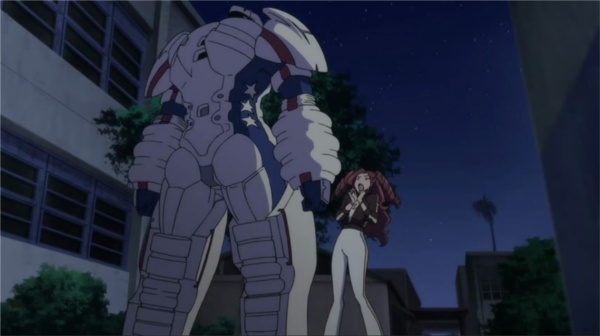 There’s more talk afterwards about standing up to fight. But fight who? Will’s gone, his mission accomplished. I’m sure we’ll see him again, but it doesn’t have to be anytime soon. The only other little bit is that Collins sees Heroman, so that’s one more in the secret. That means next episode she gets to go on a beach trip along with the others. Nice fringe benefits when you’re in the Heroman crew. Except there’ll be tentacles as well.

Hard to say what I feel about Amagami SS 4, the end of the Haruka arc. I felt a bit of tension that maybe things would go wrong, but of course everything went right. Junichi gets the girl, just as expected, and now this little story is over. Just like that.

Some of arc’s finale is undercut by the usual boy worries. Junichi has to get up the gumption to ask Haruka out for Christmas Eve, that sort of thing. But Junichi, as usual, finds a perfect time and place to do it. At the park where he was stood up they talk about their memories there, because they had met on that fatal day. Junichi had been cheered up by this mystery girl’s conversation. Haruka says he reminded her of her beloved dog, John. … Who calls their dog “John,” even if you are one-quarter caucasian? He tells Haruka of his heartbreak, then asks her out. Well, done, Junichi!

Knee-kissing weirdness of the last episode aside, the relationship between the two has been established. It’s Haruka’s eccentricity and love of games contrasting with Junichi’s winning, forthright honesty, though he’s been known to get a little odd, too. Now Haruka takes the initiative on the weird front. He’s invited him to her family’s party, but he has to run to meet her and gets sweaty, so she takes him to a hotel to clean off. Whoa. But turns out she meant using the pool. Junichi scores an honesty hit when he admits he was busy staring at Haruka in her bikini. Turns out the party is at the hotel anyway. … Only it was cancelled, so it will only be the two of them in the rented suite. Junichi is so overwhelmed by all this that at one point he practically stops reacting.

The rest is straightforward. She bathes, he agonizes. There’s a tearful confession from Haruka, who is upset because he didn’t peek at her in the bath (Women … sheesh). More confessions, and the next thing you know it’s ten years later and they’re a married couple with a proclivity toward little games. Just like that. It feels abrupt. On the other hand, the show managed to develop the couple’s characters and relationship nicely in such a short time. Maybe that’s why I’m sorry it’s over. Well, it’s Kaoru’s turn next week. They’ve already set up her character, so I’m looking forward to whatever more they’ll do with it.