Heroman 22 works as a more mature episode until a maudlin ending and the inevitable cliffhanger knocks it off the rails, but mostly it worked. 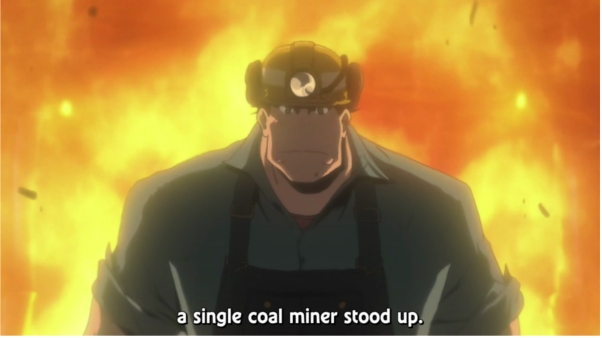 We start with Joey mulling over his late father, and we get a flashback of the man dying heroically while rescuing fellow miners from a fire. Joey was way too young to know his father well. In fact, he seemed to be an infant, so it’s amazing he’d have any memories of him at all. Holly, unexpectedly, says their father was NOT a hero, but won’t go into why. And what is a hero, anyway? It’s a question that gets resolved nicely a little later. As for now, Joey meets some miners who knew his father. Yep, no question, they say, he was a hero. But this doesn’t move Holly at all. 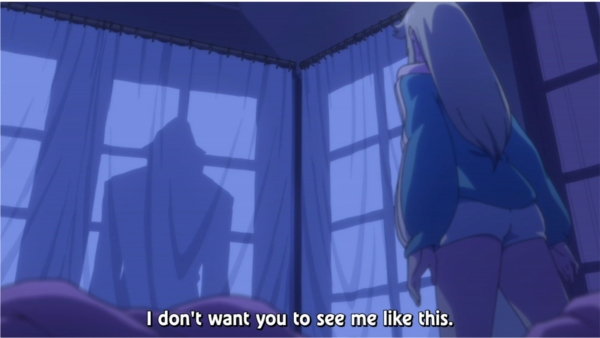 Lina’s unhappy situation gives us come clues. Will comes in the dead of night to talk to her. It’s a goodbye forever speech, coupled with “Stay away from Joey,” and “Take care of mom and pop.” Lina is one of the few people around who know that Will’s alive. In a later scene we see the problems with this when her father again tells her that Will is dead, and to move on. Of course it’s not that easy to move on after a death if the person isn’t actually dead. And even if they are, some people find it easier to move on than others. Back to Holly. 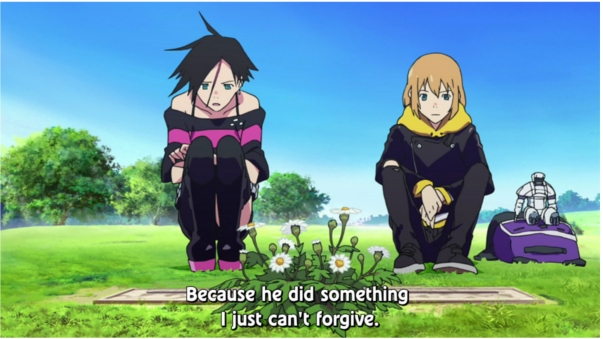 Being heroic is great, but to constantly think of other people instead of yourself can actually hurt them more. Holly’s anger toward their father is simple. He went to work, saying he’d be back, but he never did. You can argue with this logic. It’s clear that all the miners, the father included, would have died if he hadn’t done what he had, that it was just dumb luck. But that does little to comfort the bereaved. Yeah, big deal, he was a hero. Now he’s left his family without him. Holly often acts selfishly, but no one can blame her here. Her anger is directed toward a man whom she dearly loved and still misses. A shame that the episode goes maudlin at this point. Joey discovers a family photo folded into his old mining helmet. See? He was thinking about them all the time! Sorry, it doesn’t work. Neither much does the following scene between Joey and Lina. In spite of all they could say, they say next to nothing, except Joey pronouncing he won’t hesitate, whatever that means. Possibly referring to being heroic in spite of the consequences. Then a phone call to set up the next arc, and we’re through. A shame. This episode was working out very well until it didn’t.

Yumeiro Patissiere 46 brings back to Fairyland as Ichigo looks for her grandmother’s elusive strawberry tart recipe. Everyone’s interest is piqued when Kashino borrows a book from the academy’s library, only to find the tart recipe page blank, just like Ichigo’s grandmother’s recipe book. Everyone’s all for finding it, except Kashino.

It will surprise no one that this is the thrust of the episode, in fact, I predicted it the moment Kashino said it, but never mind, we’re going to Fairyland for more fairy antics! Trouble is, this time around the antics are pretty low-key. They start well enough with the gang of jerks (Kasshi, Andy and Narci, heh) reappearing, sneaking into a secret vault in a museum, and Caramel bludgeoning guards with her spoon. But the fun drops when they are caught.

From here on it’s all talk. Kasshi, who in spite of looking like Kashino, has no connection to him (for one thing, Kasshi is nicer), tells Ichigo pretty much the same thing Kashino did. She needs to come up with her own recipes. Otherwise it’s not as satisfying. Then they’re taken in to meet the former director, Majoram, who talks cryptically and tells Ichigo which of the three tarts that magically appear on the table come from her grandmother’s recipe. Turns out the whole darn thing is a test, which Ichigo naturally passes. We get some talk about the importance of soil to grow strawberries. The recipe is transported back into the book—written in fairy language.

All fine and dandy but I’m a little disappointed. Ichigo deciding she doesn’t need to recipe translated makes a good point, but we knew that was coming. But the whole thing with the sealed book and mysterious crones bearing keys doesn’t live up to expectations. I was expecting something more … cosmic, though the magical effects they used were kind of cool. Also, Ichigo wasn’t just looking for that recipe so she could use it in the Grand Prix. It was more than that. It was a connection to her grandmother. To suggest she had other motives cheapens her intent. Next week apparently we’re back in Fairyland, and Tennouji has scenes. It’ll be good to see her back, even if Miya is too.