When an extra episode of Sora no Woto appeared I thought it would be fun to pair it up with its civilian counterpart, K-ON!! I don’t expect to have any sage pronouncements on the concept of moe in these differing series, but the character designs are so similar … At the time of this writing I haven’t watched the Sora no Woto episode yet. I tend to write about a show just after I view it.

K-ON!! 21 gives us a good opportunity to examine the characters’ appearances, since the whole episode is devoted to mirror gazing and hair brushing. It’s school picture time. 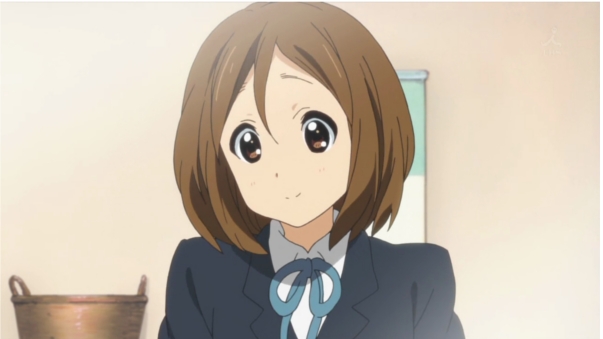 And most of it follows Yui, dissatisfied with her previous yearbook pics and determined to take a great one this time. She fiddles with the bangs, tries on Ritsu’s headband (forehead!), worrying, worrying, while of course she looks just fine to begin with. So do the other girls, but though they go through similar bouts of anxiety they’re nowhere in Yui’s league with fussing. In the midst of this we do get a couple other things. Yui and Ritsu need to hand in their career preference sheets (how long ago was the deadline?), Azusa has lost focus now that the festival is over, but is still worried that the seniors are slacking off. Ui tries on Yui’s hairclip … and winds up looking exactly like her.

It will come as no surprise that Yui’s fussing would turn to tragedy (love the pause and silence after the fatal snip). And that it would lead to subsequent scenes where the girls try to fix the horrible damage. What bothers me a little more is that Mio, who could go to just about any school she wanted, turns down recommendations because she wants to attend college with her friends. I know it’s supposed to be a sweet thing she’s doing, but college is where things change, horizons broaden, new things are discovered. It’s not like she’ll cease being friends with all of them.

Well, okay, the pics are taken, Sawako accepts the late career sheets and doesn’t seem to mind the thought of them going to the same college, so I won’t worry. Well, I will, because Yui and Ritsu are such airheads it’s going to be difficult for them to get in. In the preview we see them actually sort of studying, so maybe it will turn out all right. As for me, since this episode had endless closeups of moe girls’ faces I’ve hit my limit … oh, that’s right. Still have to watch that other show.

It was nice to see the Sora no Woto girls again, especially in an episode that holds no significance, apart from Kanata discovering their bootlegging secret.

Everyone, including me, commented negatively on how Sora no Woto’s characters looked just like K-ON’s. Looking at them together now I see some resemblance, sure. You can easily make the connection in appearance and behavior between Yui and Kanata. Azusa and Kureha share a trait or two as well, especially with their relatively serious demeanor. But that’s about it. With hindsight the character designs are more different than I had thought. Sora’s are drawn more simply, and while the artwork for both is superb the animation is less fluid than in K-ON!!, which is in no way meant to be a putdown. Also, while the K-ON!! girls dither about nothing, the Sora girls dither with intent. In this case to keep the distillery a secret from Kanata and Yumina the nun. When Kanata’s suspicions arise and she keeps pressing about what’s behind that door, Filicia orders a squirt-gun battle, with Yumina joining it to even the sides.

It’s very amusing. By now we’ve guessed that Filicia spiked their tea with hooch. The girls get sillier and sillier and the whole thing plays out as a parody of bad war movies. Moments of great bravery. Superweapons (courtesy of Noel). Heroic speeches followed by “No, you mustn’t!” Sacrifices. A final showdown. But the entire time there’s something a little odd about it.

These are not only soldiers, they’re war victims who know all too well that war isn’t really like in fiction. Even pacifist Yumina is excited to participate, though for her it’s because as a child she never got to play much with other kids. Okay, they’re drunk, but it still goes down … not wrong, but odd. Only Kurehara seems bothered by it all, and that’s because we learn later she is incapable of getting drunk (but she can get sick afterwards. That can’t be any fun at all). We get a lot of shots of her wondering what the hell is going on.

After the battle has reached it’s gory end they all get drunk some more, take multiple baths, and we get our bits of rather tame fanservice. I forgot this show occasionally indulged in that. A fun episode. Again, I wish the series had gone on longer. There was a lot more they could have done. Unlike K-ON!!, which, frankly, has just about run its course.