Highschool of the Dead 10 doesn’t bring us much wild action, only one zombie gets decapitated, yet the team still finds itself threatened.

Safely behind gates, in the womb of the Takagi family, it looks like they’re in a good spot, . But maybe that opportunity to rest and think is the thing that allows some of them to start to fall apart. Especially brittle Saya. This is her home and obviously an emotional minefield for her. When they meet to talk over what to do next it’s she that explodes first, and she has a point. The Takagi empire moved quickly to save and protect their workers—all except her. You do have to wonder why such an efficient and powerful organization behaved like this and whether it’s a good thing to stay under their protection. And earlier Saya’s mother told Takashi that they’ll only taking in people who are prepared to survive. As opposed to our heroes, who risked their lives to rescue a helpless little girl.

As for the rest of them, they’ve lost their freedom to act. We see it early on when some adults reject Takashi’s offer to help carry a box: “Let the adults do it.” And other staff see Kohta’s caring for his weapons as a a kid playing with toys he doesn’t understand. To give it a further twist, Soichi, Saya’s father and head honcho, arrives with a caged zombie who used to be a friend. He cuts off its head before his people to demonstrate something that any sane person had already figured out by this time, a demonstration of both practicality and his autocratic power. Saya, meanwhile looks at the beheading with disgust. Again, is this really the best place for them?

So they can remain there in a gilded cage, grow soft (Takashi’s fear), and let the grownups make the decisions, even if the decision might not be best for them, or they can leave. In the back of my mind I wonder how long the cage can even hold up. It looks safe for now but sooner or later they’ll run out of power or supplies, and the zombies are still everywhere. Saya and Saeko hint at this possibility. These questions are put on hold when some of the men try to take Kohta’s weaponry away from him; in this relative paradise he’s in danger of becoming an ineffectual fat nerd all over again. The rest of the team rush in to defend his honor. Saya gets in the zinger at her father: “Unlike you, he has been protecting me!” Alas, we’ll have to wait until next week to see what happens. We can assume they will eventually escape, and that Saya will be with them. But the previews suggest that Shido is going to have a hand in it as well. Damn, I was afraid he’d be back.

Seitokai Yakuindomo 10 starts in an elegant room with the music of flute and harp, and a demure nurse named Dejima, and it’s not fooling me a bit. Sure enough:

And off we go with more straight gag formatted lack of action. Hand injuries. The gang go to Aria’s mansion to hang out. Student Council budget reports. Career advice. And, er, other things that went by without thought. They bring back a segment called “You Tell ’em, (character name)!” Originally for Suzu, they add new ones for Kaede and Hata. And while it’s all stupid, we get a moment of non-sequitor when Hata points out that her segment overlapped with Kaeda’s, leading to three unknown boys shouting in disbelief. I actually laughed. This show is actually rather good with non-sequitors.

After that we get more of the same, except this time it’s the school festival. Let’s see, a dramatic play with dubious dialogue; the chocolate banana booth mentioned above plays out as we expect, then they move to a popsicle stand for an encore. Takatoshi’s asides are very effective this episode, in fact, in one scene, after the advisor says something I won’t repeat, Suzu looks around, begging Takatoshi to show up and say something. Andophobic Kaede serves the boys tea from long distance. Then we get the obligatory single, sane moment, where Shino invites Takatoshi to the bonfire dance, leading him to conclude: 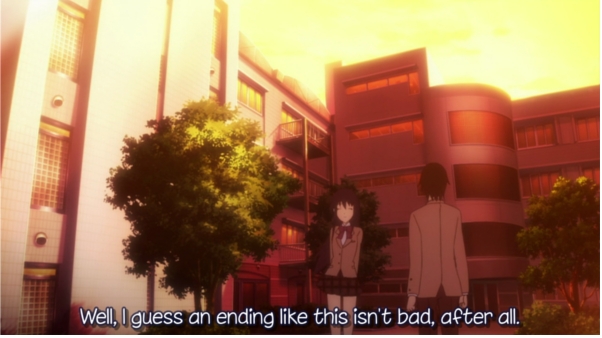 This was the second not-bad episode in a row. Sure we get the dirty punchlines, in fact, they’re getting dirtier, but the show’s improved its timing and free use of sight gags, such as love-struck Mitsuba seeing Takatoshi in a sparkly pretty-boy mode, which makes him look disgusting. Just a little bit they added to liven things up. In other words the show’s not as tedious to watch as it used to be. Now it’s only tedious half the time.