Another episode of Highschool of the Dead where no one whacks a zombie. Instead we get characters talking, decisions made, and Shido’s brief and ignominious return and departure. Oh, and some fun at the end, if you can call it that. 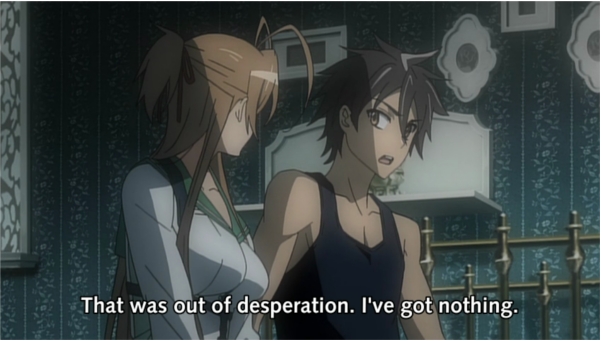 Each main character gets a scene and then we move on. We don’t see the aftermath of last week’s little crisis. Apparently Takagi was impressed enough that Kohta and his weaponry are left alone. But we get some spillage when Saya confronts some adults who claim the zombies are still alive, that it’s a disease and they shouldn’t whack them. It’s an interesting question, actually. But Kohta makes the argument that the adults are living on fantasies because they can’t handle the truth. They want the hope that the world can somehow get itself back together. And really, when a zombie’s about to bite you what ARE you supposed to do? And that’s it for those characters this episode. Next it’s Saeko and Takagi doing some bonding and sword-giving, and the thought that Takashi’s heart might waver too much to be an effective leader, which leads to Takashi and Rei’s nice scene which expands on the topic. As for me, I’d choose Takashi to lead for the same reasons Rei does: sometimes he wavers but when it’s important he leaps to the right course of action. Besides, I’d prefer a leader who sometimes doubts himself and listens to council. 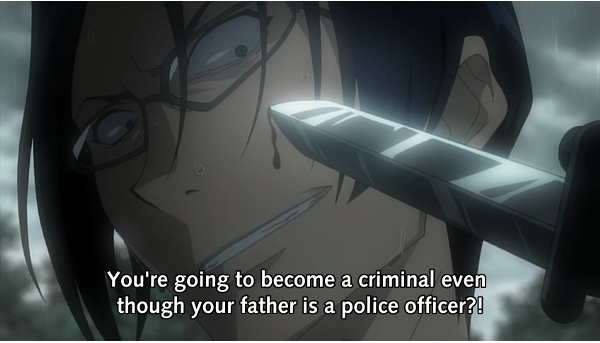 Nice talking by everyone. Too bad Shido has to show up. He’s still got his cluster of fanboys and girls—well, most of them, because he sees no problem with sacrificing a member when he feels like it. And what the hell has he been doing to them? It’s like they’ve got a perpetual orgy (or pre-orgy, since everyone’s still somewhat dressed) going on in that bus. It’s one of the things in this scene that doesn’t make sense. When he’s allowed into the Takagi compound Rei immediately freaks out and threatens him with a knife. We learn the reason: Shido made her flunk a grade to disgrace her father. Fine, so why didn’t she react like when they first ran into each other early in the series? And what’s with his reaction when she decides not to kill him? He had just played a “you’ll live with the guilt” card, she turns away … and he gets upset. He ought to be happy. “He’s not worth my time” isn’t the best comeback I’ve ever heard. Never mind. He is ordered to leave along with his students. You think they would have rescued them and done some reverse brainwashing. What I’m most sorry about is he still hasn’t been eaten.

To top off the episode we get a glimpse of things to come. Looks like everyone’s in for a lot of fun in the last couple episodes. So to cheer us up a little:

Takatoshi gets ink on his fingers, Takatoshi tries to yawn, Hata interviews Mitsuba, it’s windy, students hanging around after school, Kaede brings a report, Suzu is short, Suzu overhears two weird conversations, Suzu is short again (appparently this is the Suzu block), Takatoshi sets up a kotatsu. Then a subset of jokes around cleaning the office: a cleaning spray which turns into a commercial …