Until the avalanche of Fall season episodes begins I’m limiting my daily report to one show a night, otherwise I’ll run out. For some shows this won’t be a problem, but there’s usually so little to say about Seitokai Yakuindomo that I’ll have trouble stretching my entry to the usual length. So I won’t.

We start with New Year’s Day. Let’s see. They try to recall their dreams; happily, we don’t hear about them. Then we learn what they wished for, or assumed Takatoshi did. Kaede bumps into Takasoshi and freaks out …

After they finish perverting a perfectly good holiday it’s back to school. It’s cold. Girls shiver for for more reasons than one. It’s snowing. Then it’s raining and Takatoshi interprets the girls’ reactions to thunder. We get to the only sustained action in the story, Kotomi’s attempts to pass the school’s entrance exam. Tiny Suzu tutors her, gets called a sensei, gets all happy.

We move on to Valentine’s day. At least this episode moves fast. None of the handful of boys attending the school get any chocolates, because … 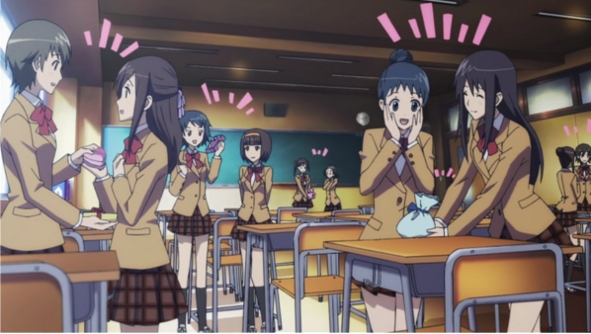 Actually, this bit was pretty good, especially when Takatoshi wisecracks to one boy that no one watching remembers who he is. Actually, the student council girls give Takatoshi valentines, and there must be a joke about murky white fluid filling, right? Moving right along we get back to Kotomi and her entrance exams. After botching the exam itself she goes in for the interview. Remember that she’s as disgusting as any of the other girls in the school, and she gets a sympathetic interviewer. 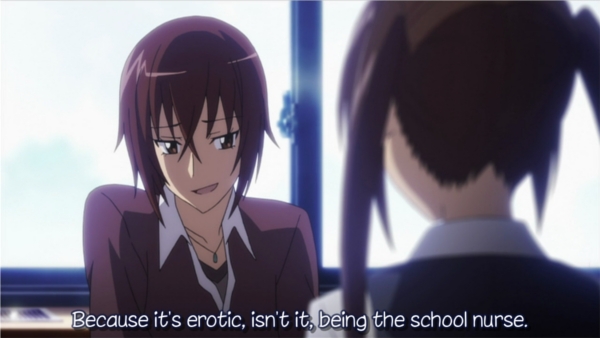 It’s the best scene in the episode. At first it’s intimidating with its two tired teachers and a nervous would-be student until teacher Naruko realizes she’s talking to a kindred, if disturbing, spirit. So it’s no surprise when they go check the results. 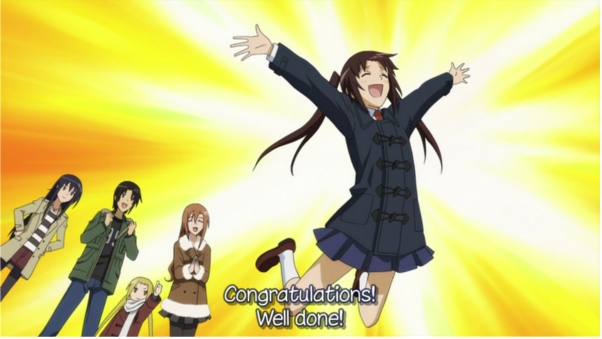 She must be dreaming! Someone pinch her! Someone does. Do I need to tell you where? Okay, what did I miss? Er, Takatoshi’s fly is open, Naruko tells her class about a reunion she attended, Suzu is short, Naruko catches a cold, Suzu is short again, Shino gets a shoulder massage, and other things too trivial to mention. Takatoshi’s world-weary asides after the punchlines felt a little off this week. I think he’s trying to hard.