This is what happens when a series with a definite, built-in crisis kills too many episodes with unimportant story arcs. They have to crowd all the important stuff into the final episode, or two. On the other hand this can lead to an episode like Occult Academy 12, full of chases, explosions, confrontations and crises. Great fun.

We can all think of other series where the climactic bits throw everything they can at us. Most recently, I recall Ichiban Ushio no Daimaou, and while those three episodes were fun to watch rarely did I know what was going on. Everyone was fighting and rescuing everyone else to no real purpose. OA is different. Yes, all the characters are set in motion but you know exactly why they’re doing what they’re doing, even if what they’re doing is pretty much a side story to the main battle (I’m talking about the gang in the pickup truck). 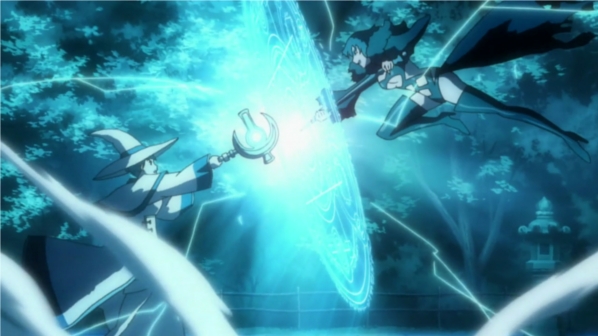 The mysteries have mostly been solved. The existence of Maya’s father is the exception. I had long suspected that Mikaze was the Nostradamus Key, though I hadn’t expected her to be a dark witch as well (my backup theory was that it was little Bunmei—that would have been interesting). Nor had I expected Chihiro to be one of the good guys, let alone a white witch. The show did a nice job misleading us. But even though I learned this last week I had no time to let this sink in because they go straight to battle while Chihiro’s scary bodyguard (who is a dog demon with wings—who’d have thunk?) flies Maya away. The fight and the flight are almost relentless, spells cast and light shows, thumping music and explosions, interrupted once when the dog lands on Ami’s roof, getting the side characters into the episode. And they deserve to be involved (good to see Ami’s dad get involved, I’ll say it again: he’s the coolest dad in anime) even if they mostly just drive around and get attacked by little granny demons. That’s all right because at the time we don’t know that they only have one use to the plot—get Uchida to the Academy, where Maya and Mikaze are having a little confrontation. 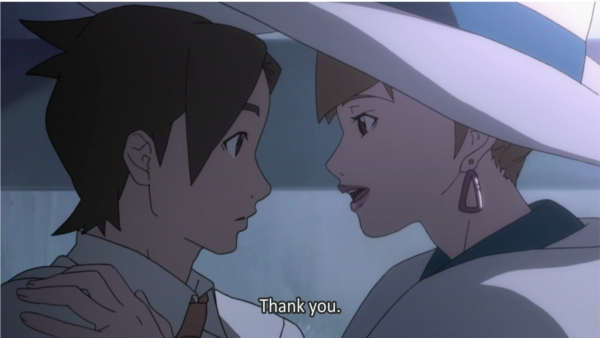 Kozue’s abduction into the cult (geez, the girl can’t win) isn’t the only funny moment. While Mikaze and Chihiro duke it out with explosions and arcane glowing symbols it suddenly seems like they’re not fighting over Maya’s life, they’re fighting over Uchida and the nature of men in general. That bit of humor leads almost logically, to a nice little moment where the fatally wounded Chihiro rescues Uchida, drops some info-bombs into his ear, but not ours, and says her goodbyes. She truly loved him, well, we knew that, but the fact that a character everyone disliked at the beginning dies heroically, while making her peace with what mattered to her, is especially satisfying. 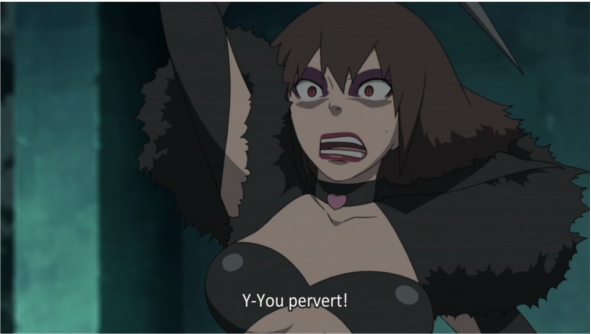 The finale stumbles somewhat at the climax. We get Maya, Mikaze and then Uchida on the ledges of the academy, and for a while it’s a question of “The notebook still exists? Here it is! Oops, I dropped it! Where’s the notebook?” Mizake’s reactions slow down a hundredfold as Uchida reads the spell out loud and Maya repeats each phrase. Surely, even if she couldn’t hurt Uchida because he had the notebook (“I’ve had worse from Maya”) she could have just killed Maya instead. Also, she seems a little confused when Uchida defies her. Surely she couldn’t be that naïve. Slow thinking kills the witch.

Well, it’s over. I think the good guys won. It didn’t seem to affect the lives of the future guys, at least, they’re surprised to see they’re still living in a ruin. What did they expect? Alternate timelines and all that. On the other hand, the Maya’s dad, if that’s who he is, shows up but says nothing. Chihiro said he’s alive … Maybe the finale, yes, this wasn’t the finale, will clear all that stuff up for us. Or maybe they have a surprise in store. We’ll find out. Whatever happens it won’t live up to the explosive fun this episode brought us.