Awakawa Under the Bridge x Bridge starts on probation. I liked the first season well enough but by the time it was over I thought it had run its course. The sequel is certainly going to be the same—the citizens acting weird and Recruit reacting to them. That’s pretty much what I got from this episode. 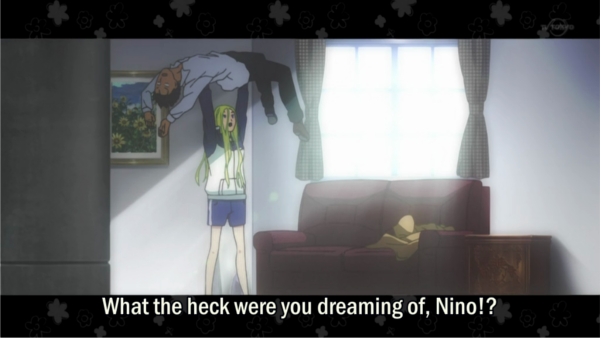 Nino has a strange and perhaps prophetic dream and that somehow leads to Recruit asking her to move in. Nino doesn’t get it and Recruit ends up living at Nino’s place while she lives in his. Various characters appear, expecting Nino, and act wacky. Yeah, so far this episode is more of the same. So is the next section, where Recruit looks for a lost baseball and meets a threatening amazon. So now we have another eccentric character. Then there’s the annual marathon.

It’s more of the same, too. Everyone uses their eccentricities as strategy and then drop out. This was all entertaining enough but I’m still not sure I want to watch another season of it. However, Nino’s dream was cool. It makes you wonder if they’re going to get back to it.

Psychic Detective Yakumo looks to be routine. A guy (Yakumo) who can see dead souls and the girl (Haruka) who has a case for him and will probably become his Margo, or lover, or both. 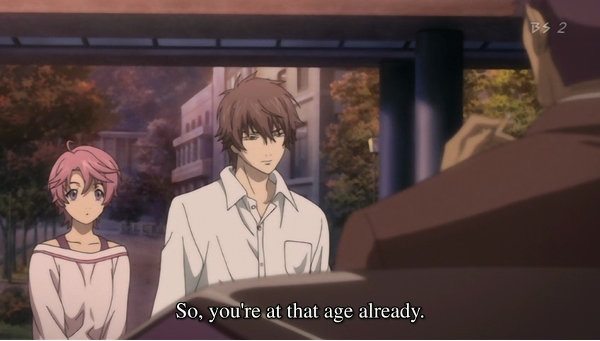 Haruka has a case for him. She and classmates went into the “closed room” of an abandoned classroom building and since then have either committed suicide or gotten possessed. After the antithesis of a meet-cute scene Yakumo takes the case. The story is told straightforwardly and with little excitement except for certain plot twists. But there are a couple things about Yakumo which help the basic premise. First, he can see spirits, even talk to them, but he can’t exorcise them. Second, though this is a paranormal show this first story at least works more in the real world.

Yakumo is practical and goes for the logical conclusion rather than the supernatural one. For all the spirits that pop up from time to time the killer is flesh and blood, and any supernatural connections are deliberately exaggerated so that people will laugh at them. That’s nice, but apart from little bits of detective work the story itself was dull. The killer’s identity was obvious at the fifteen minute mark. As for the main duo, Yakumo is your typical mysterious laconic rebel-type while Haruko has no personality at all. This makes for some dull conversation. This show’s also on probation.

There’s nothing special about Shinryaku! Ika Musume either. Just a silly comedy about a squid girl who decides to take revenge for the damage humanity has done to the oceans. She decides to make a beach restaurant her home base.

In spite of her genuinely dangerous tentacles Ika doesn’t do much to inspire shock and awe. The family running the restaurant take her in for no particular reason except her usefulness waiting tables. Ika goes from defiant to submissive in turns. It goes on like this while they introduce the other characters. We have the grouchy Eiko, young Takeru and Chizuru, the oldest sister. Each of them play off of Ika as she learns more about the surface world. Takeru is probably the most fun since no matter how threatening Ika gets he thinks she’s the coolest thing in the world. Chizuru is quiet and sweet and very dangerous. But it’s not all that entertaining. They perhaps underestimate their young audience by having to explain some of the jokes, so it drags. I was indifferent to the series until the last part.

The fact that they went this far gives me hope. Since they can’t repeat the shock value of the first time, not much hope, but I’ll keep an eye on the series for now.