So far in Bakuman the boys’ dreams move forward with nary a glitch. Miho has agreed to marry Saiko when he becomes successful. His father and grandfather (though not his mother) have given their blessing. Now in episode 3 the boys get to invade his uncle’s studio. 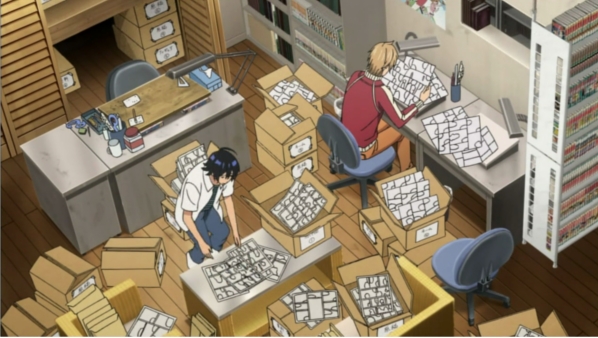 It’s a learning experience, especially for Akito, who’s never actually created a script before. We get some crude nuts and bolts about how the creation and editing process works, plus tips on how the uncle broke into the business, which gets them more psyched up. Two things come to mind. First, they haven’t actually created anything yet, though Saiko says wants to do something manly. Second, Saiko is following the exact same path that his uncle did, and look where that got him. No girl, and dead from overwork. And then … 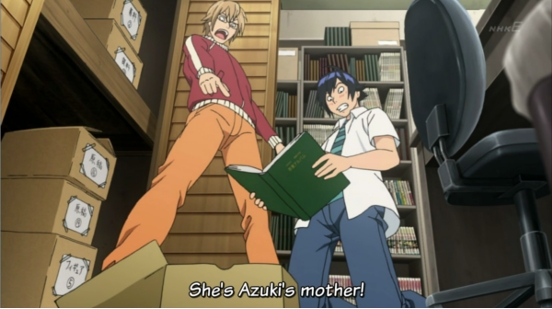 After this revelation they visit Miho’s mother. Again, I wait for something to interfere with their plans, or bring back reality, but instead they all have a nice talk and she says she will support them from the shadows. We learn a little more about the relationship they had, through a manga character who can’t confess to his love. The mother took it as a personal message to her even though it came out after she was married and it was too late … And the outcome of the manga story (which, remember, Saiko’s uncle wrote) should set off more alarm bells. It’s as if Saiko is facing every single “don’t do this!” portent possible and still ignoring them. And they still haven’t drawn anything.

Even if many of the main characters don’t do anything or even show up, Otome Youkai Zakuro improves a little. It’s Zakuro and Kei off to investigate a missing girls mystery.

Kushimatsu didn’t want to send this pair, but Zakuro has personal reasons for taking the job. Partly it’s anger over something that relates to her own story, but also because she hopes to find out something about her mother. Kei’s job this episode is to listen to her and sympathize. Oh, and to wuss out when the moment’s right. At least he’s getting better with spirits, in fact there’s a nice mirror scene where we see him play with the pumpkinhead kids and later Zakuro play with human children. It’s about all we get for the humans-spirits relations issue this week, but it was nice to see. 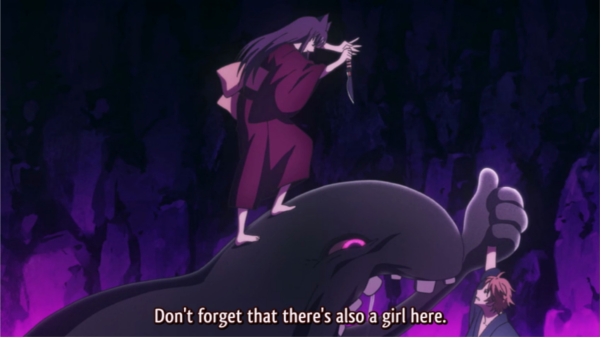 The monster is more disgusting than last week’s, but still mundane. What’s interesting is that we learn (but Zakuro doesn’t) that it was a trap specifically to lure her in. There must be something special about her. So a larger story arc, hinted at before with the persimmon tree dream, starts up in earnest. I just hope the evil spirits decide to be more than big grey growling bulbous things. I’m getting tired of that. 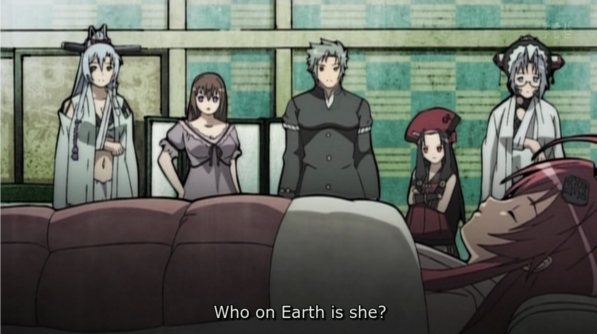 It’s become clear that Jubei is the creator’s way of creating a series with both a deadly samurai girl and a goofy one who tries to win with cuteness, both in the same person. This time we start with the latter as the others try to figure out who her master is and what’s going on in general. Meanwhile Jubei acts cute, talks about being broken if separated from Muneakira (which makes everyone pause), and has scary nightmares. Add Sen to the mix and it turns into a love triangle comedy, except one of the triangle points is a princess who isn’t used to not getting her way. When she has had enough the fight breaks out. 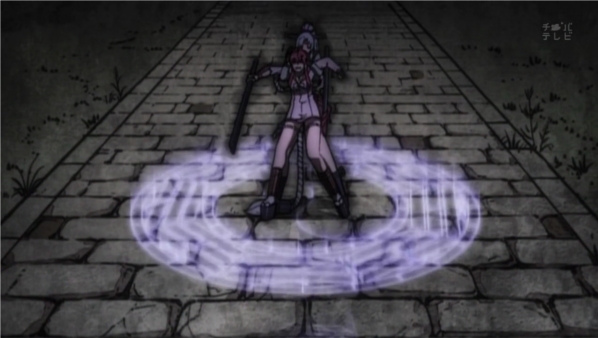 I should have figured by now that Muneakira is Jubei’s master, since she turns into her nasty, dirty self by kissing him. And it’s nice to see that Jubei isn’t completely invincible. It’s also nice to know that she’s a force for good (Sanada tests her), though it makes the story a little less interesting. Speaking of story, we’re finally introduced to it: students going missing, and Sanada and Matabei are the suspects. Now I think the characters have sort of figured each other out, they’re ready to get on with it.