We finish up with Ai in Amagami SS 16. The whole thing is getting a little routine. The only interesting things are what each girl brings us and the odd quirks the creators throw in along the way.

The weirdest thing in this arc was the broth metaphor. Last episode Ai turned into Ramen. This week she and Junichi help man an oden booth. Later they’re splashing about in a hot spring, which is not a broth, but at least it’s hot. And the fact that Ai is on the swim team. Maybe “bodies in bodies of water” is the better way to put it. Whatever they’re up to, the floating tea club’s examination of the swim team’s oden (with scary background music), not to mention the drunk teacher (hmm, tea … alcohol … more liquids) was enough to enliven a potentially dull situation.

After that there’s only the confession scene to deal with. Apart from the fact that they’re naked in a hot spring there’s nothing much to it. She confesses, he confesses right back, they kiss. I mean, it’s a sexy scene, but one highschooler confession sounds pretty much like any other. The World God Only Knows has the same problem. Each climax, if that’s the word, is sentimental, and besides, we knew it was coming a mile away. Ai’s not my favorite of the girls but I did appreciate how she took the initiative, something we needed after passive Sae. Next week Rihoko, another old friend, gets her turn.

In episode 3 Fortune Arterial continues refuse to behave like a vampire show. Oh, we get the occasional blood and people with fangy grins, but the theme, at least this week, has nothing to do with the occult. As usual we start with no fangs whatsoever. 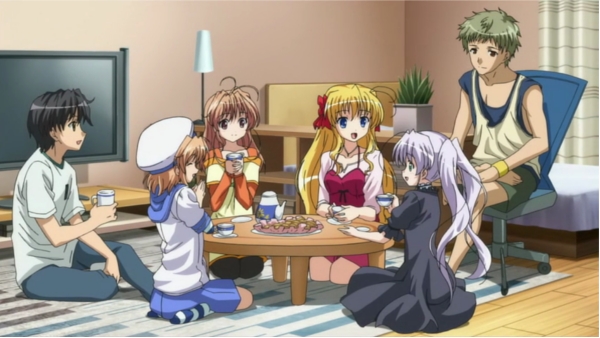 Apart from Lori’s cryptic comment about Tohei’s cute neck, the first half is plotless and happy. Tea parties in Kohei’s room, singing to TV shows, going out as a group to shop. Erika and Kohei are good friends now. Everyone has a good time. You know that something’s about to happen—well, when Erika tells Kohei to look out for her brother and the background piano switches to a minor key, you’d better expect it.

Lori invites Kohei to the Oversight building to play an odd little game. And Kohei learns that Lori and Erika and god knows who else are vampires. They pretty much make their point with everything short of drinking his blood. What gets me is the scenes’s straightforward tone. It’s broad daylight, nothing threatening (well, one strange bit), just a slightly sinister chat about Lori’s true nature. Kohei’s reaction is mild surprise. I know he saw Lori bite that girl in the church two episodes ago, but shouldn’t he be freaking out more?

Instead, he’s given a choice: join the Student Council (why?) or get everything he’s experienced on the island erased from his memory. At first this looks like an easy decision for him. All his life he’s hopped from school to school and was never able to make friends, “avoiding responsibility,” as Lori puts it. This would be just like that. But then he reconsiders, as Erika tearfully tells him she doesn’t want to lose the friend she just made, that he doesn’t want to forget these people. And it hit me as to why they had spent the first half showing him laughing with his new friends. Since I was expecting something more sinister I never saw it coming. For this episode at least the vampire stuff is all plot device. This episode was dedicated to Kohei, for the first time in his life, choosing to put his current experiences and new friends first and foremost in his life.

As for his new Student Council duties? What sinister trap has he fallen into? Heh. I’m not saying this is a great or even a good show right now, but it’s certainly not going the way I had thought.