A short one. RL circumstances have made me cranky tonight.

Getting the characters straight with so many delays in watching is not easy, but one thing’s for sure. Shiki just gets bleaker and bleaker.

I’m having trouble thinking up things to say about it. The deaths are coming faster and closer to home. There’s not a single main character who hasn’t had someone in their family bitten. And then there’s Natsuno, who is either too weak to resist or still hopes his friend Tohru will make the decision to spare him. Tough luck. 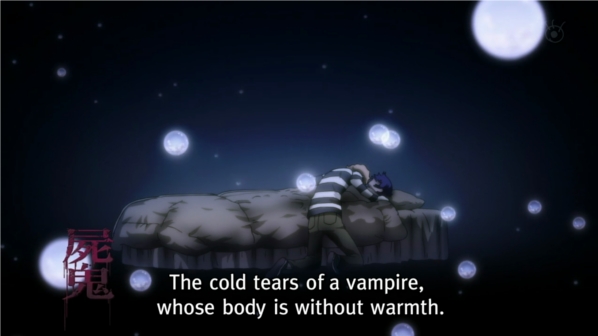 All the rest of them just stand and watch. There is no progress, well, apart from more deaths. Seishin tends to his sick father. The kids stand by, helpless, and now THEIR father is a victim. Toshio sees his wife die and then works to preserve the body in ice. No idea what he’s thinking, and we see no result this episode. I don’t think we’re going to get a happy ending.

In Bakuman 5 the boys finally get some serious work done.

They said they’d finish their manga by the end of summer break, and by god they did it! I’m actually impressed. The trouble is, this is such a straightforward show it means a lot of scenes of Saiko working all hours while Akito polishes up the storyboards. Also a lot of mutual confidence boosting and general bonding. Both are critical of their own work and if they don’t like it, into the garbage it goes. They agree not to criticize each other’s work, which I think is maybe a mistake. There’s one moment where they take a break at a fast food place and Akito is distracted by two girls talking about leisurely things. But he snaps back to serious mode pretty quick. But the point is made: the boys are sacrificing their summer vacation.

The only other thing they do is talk on the school roof, and Akito accidentally confesses to Kaya. This leads to a cute scene between her and Miho as they mull this over. This angle could be interesting. It’s good the boys are working so hard, but even we the viewer need a break from it sometimes.