Shiki 14 doesn’t get any happier, but some progress is made. 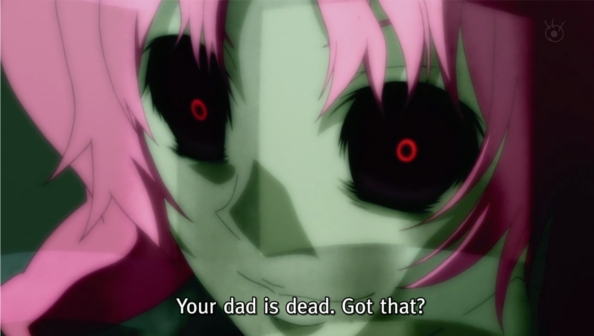 For much of the time it’s more of the same. The vampires catch some new guy, or start polishing off the remainders of families. This time it’s Kaori and Akira’s father, done in by Megumi. Sadly, the kids know exactly what’s going on, but their mother seems to be in a state of disbelief. Toshio is waiting for change in his dead wife and is walking around like a zombie. But we see other things at work, too. Masao, in death, is the same bastard he was in life, and Megumi beats him up, which is satisfying in itself but also demonstrates again that the vampires aren’t in accord about everything. Hints are made that Natsuno was cremated, but I can’t believe the show would just drop him like that.

The real progress comes when Kyoko wakes up. Toshio straps her down in the O.R. and proceeds to run a few little tests, filming the entire thing. And so he gains some valuable information on how the vampires work and what can affect them. Unfortunately for us it’s painful to watch. He injects her with all sorts of things, including insecticide, and confronts her with sacred artifiacts. She’s awake during the entire ordeal and obviously in terrible pain. When he gets to slicing her open to see what happens if a vein is severed I finally had to turn away. Toshio is basically torturing his wife, and for the first time in the series I had sympathy for a vampire. Okay, some knowledge is gained, but at the cost of part of Toshio’s humanity.

If Shiki 14 made you disgusted and depressed, Kuragehime 3 will pick you up. It’s the best episode so far and a delight to watch.

Kuranosuke is up to his tricks. When his uncle the Prime Minister comes over to visit he is at his cross-dressing best. What makes it more fun is that everyone is offended EXCEPT the PM (maybe he doesn’t know the truth). People in this show think they must live by certain norms, whether a somber diplomat or otaku, but if you throw something strange at them the reaction might not be what you expected. So already, expecting a scandalous scene and enraged PM we instead get a bit of happiness. We also see a little of why Kuranosuke behaves this way, well, he tells us. It’s nothing we couldn’t have figured out. But something odd is happening to him. He wants to live in a world of fashion but when his fashionable friends call to invite him out he refuses. Boring. Princess Jellyfish is far more interesting.

Then things get really fun. After another friendly visit to the girls (where he manages to offend everyone again) he drags Tsukimi off to his mansion and forces a makeover on her. We get a major surprise. Dress Tsukimi up, and she’s cute! But that’s not enough for this show. In the show’s finest ten seconds so far, Kuranosuke’s brother, the serious Shou, knocks on Kuranosuke’s door. It flies open. We know this will be Tsukimi fleeing in terror, but we haven’t seen her yet. What will she look like? Everything slows down as at the door we see a very pretty girl. A couple seconds later we see that Shou has frozen up, obviously smitten. Violins start to play … I guess you could have predicted that Tsukimi would clean up real nice, though I didn’t, but to get a bonus, an immediate, unexpected plot twist out of it as well, that’s good work!

After a hilarious scene where the dolled-up Tsukimi tries to sneak into her apartment, Kuranosuke causes some more trouble, or maybe not. Seeing Shou’s reaction he suggests Shou return Tsukimi’s glasses and ugly clothes. He could be doing this for the potential for mayhem, but maybe he genuinely wants to help his brother out. And Tsukimi. On retrospect I think it’s the latter. He is disappointed when Shou returns, having seen nothing but crazy otaku girls running around. He didn’t recognize the mousy Tsukimi. But now we have potential for more fun in later episodes. My only fear is that they will cop out and eventually transform Tsukimi into a permanently fashionable person, but I don’t think so. Kuranosuke believes that all girls want to be princesses. He’s wrong, and I suspect part of this show will demonstrate this.

So tonight I went from being depressed and disgusted to laughing with glee. noitaminA covers a lot of ground.