When I watch A Certain Magical Index II (or I, for that matter) I find myself having to take extra notes to help me through all the cult-babble. This time I mostly gave up and just watched.

It’s a losing bet, anyway. The show will invent whatever it wants. All it has to do is sound kabbalistic or at least in Latin. And 9/10’s of it actually have no bearing on the story. Like here. All we need to know is that the good guys are trapped in a cathedral while some crazy deaf nuns with weapons try to break in. Then we learn the ironic truth: there was no reason for anyone to go after Orsola in the first place. Her method to decipher the “Liber AL vel Legis” is bogus. I began to suspect that when she began to explain it. A simple letter replacement system? Come on! But the cool concept here is that the book can be deciphered in hundreds of ways and they never come out right. I love this idea! I wonder what Borges would have done with it. 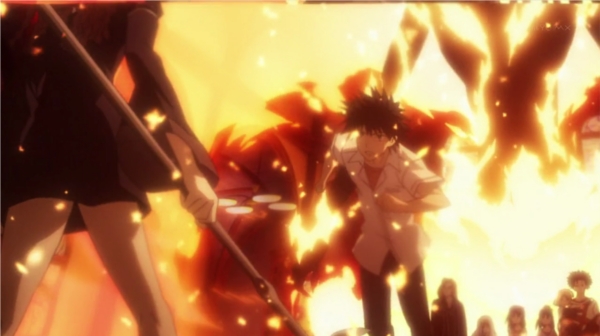 Sadly, we have to return to the plot. The nuns break in, then all of a sudden (except for Touma having a “I have a plan!” look) Touma is one-on-one with Agnese in some other cathedral. Agnese whips out a crosier and explains the weapon’s abilities and history in some detail while beating Touma up. She also whips up some theology in Orsola’s previous line about people acting through believing. Oh, she also laughs a lot. But then the big fiery cavalry shows up, and the acting through believing concept comes back to bite her on the butt. Not the best Index conclusion, but it will do.

The denouement occurs, as is so often does, in Touma’s hospital room. Kanzaki gives us the rundown, but Touma’s speech is better. The show’s cult-babble is unintelligible but often fun. The politics and power moves by the ten thousand organizations this show juggles is the thing that bugs me the most. Touma cuts through all that by explaining why he’s not affiliated with anyone. He’s worked with the Anglicans before because Index is a member, no other reason. “If Agnese had asked me for help I probably would have helped her.” Too bad there’s more political talk to bring the final moments down.

Two inconsequential stories in Soredemo Machi wa Mawatteiru 5. Both were predictable. The second was better.

Toshiko has won tickets to a private screening and wants to invite Sanada. She tries to get up the nerve, blames her procrastination on Hotori, and fails. Hotori watched from the sidelines, amused; in fact, that’s what she does for the entire episode. In the end she mutters something about having the world work for her, instead of the other way around. Even her boss doesn’t know what to make of that. Not terribly interesting. 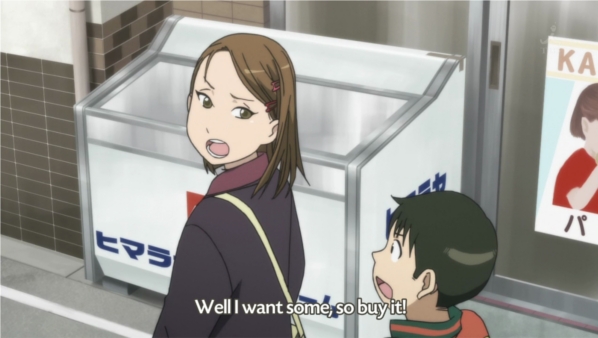 In the second one Hotori’s kid brother Takeru is asked out by his tsundere classmate Eri. This puts the boy in all sorts of danger. Eri is the type who would report boys using game cards in school, in other words, the enemy. Of course, we’re all asking why she asked him out in the first place. We don’t get an answer.

So he goes off on his first date with a girl, hoping he isn’t spotted by his male friends, and having various adults he encounters tease him. It’s really the worst thing for a boy. Date-wise he doesn’t do too badly. A couple mistakes, but they manage to have fun and Eri shows she has a sweet side. At the end he figures maybe some girls aren’t so bad after all, until the next day when he meets her in school. His conclusion: “Women are such mysterious creatures.”

Again, predictable. But it was nice to see Hotori interact with her siblings (there’s also a mini-story concerning her sister) in ways that aren’t so abrasive.