Very little actual plot happens in Mawaru Penguindrum 6. We do get some answers but we also get more questions. And a lot more colorful weirdness.

We learn what the diary is. It belonged to Momoka, Ringo’s sister, who died long ago. And it puts a twist on Ringo’s obsession with Keiju. Before, I had simply thought that Ringo’s behavior was an unhealthy crush, but if we can take her thoughts as the truth (and should we?) what she’s trying to do is become Momoka, using the diary as her guide, in order to save her family (symbolized by two stuffed animals she insists on keeping with her). She’s not doing this strictly for Keiju, she’s doing it for her family. If she succeeds she confirms her sister’s fate, and all will be well. All of which makes me realize that for any unhealthy obsession there’s always more going on than the object of obsession. There are other needs at work, too.

None of this explains what the Schrödinger’s cat metaphor is doing there, or how she can move so many belongings out of her apartment without her mother noticing, or us, for that matter. And it doesn’t tell us a damn thing about Penguin-Himari, who has returned, unaffected by last week’s craziness, to berate Shoma some more. In fact, Ringo’s story seems completely unrelated to Himari’s. You wonder why she sent the boys off to investigate Ringo in the first place. And my thoughts are no longer “How does Ringo fit into this?” but rather “Will she get the help she so obviously needs?” 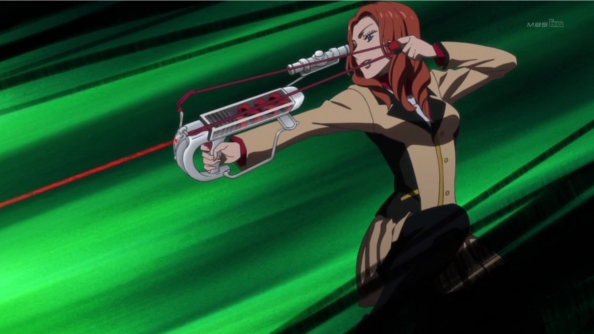 So we learn some things, but nothing gets resolved. Shoma meets Ringo’s mother, that’s all. There’s more plot in Kanba’s story. No news on how he got that money, but we see that Asami has lost her memories of him, and while he’s with two other former girlfriends they to are shot by Natsume’s cool slingshot and the same thing happens, leaving him with nothing but the remains of a red pellet with a penguin emblem on it. There was also a penguin emblem on a sign on the rooftop where the girls sat. And Natsume has a penguin, too, the fourth one from the OP. The unpleasant-looking one. But that’s as far as we get in this part of the story. And so I muddled through it all, trying to find significance in birthdays and death days and curry days, odd animated signs in the subway (“Look out for the trap at your feet”) and wonder how soon the next episode will come out.

The oldest trick in the book. Naturally, it works. In terms of plot contrivances and unbelievable things, it’s the most blatant, but not by much. It will come as no surprise whatsoever to learn why Kijima and Fei are so upset about Kenmi’s lab. It’s only a little surprise that Fei’s supposedly dead brother is alive, if you can call that living, but why on earth didn’t Kenmi let what’s left of Fei’s brother loose earlier? Well, these things actually go under the category of predictable. Let’s turn to the other categories: Inexplicable and Silly.

When the base collapses Tandoji finds an enormous boulder on his back, which he must support or get crushed along with Ruri and Fei, who are stuck underneath him. He shouldn’t be able to support that boulder, but he does, heroically–and stupidly, for the girls make no effort to squirm out from under him. Okay, you think, they can’t move. That is, until Fei sees Kijima is hurt. Then she’s out of there like a shot. Only then does Ruri does the stone-kiss thing, even though she or Tadoji (I forget who) had suggested it minutes before. At the end, Kenmi denies all accusations with a speech so phony that only an idiot would believe him. To their credit, Tandoji and Ruri don’t, and it’s the maybe the best moment of the episode. It felt honest and real, and presents the heroes with a real dilemma. Kijima’s not playig with a full deck, but his pursuer, though intelligent and sober, might be worse. Much more interesting than the flawed adventure we had just undergone, even if the brief fights were good.

I watched two episodes of Baka to Test to Shoukanjuu Ni so I could see the end of the story arc, but there’s at least one more episode to go. You notice I didn’t do that with the Sacred Seven arc, even though that one has a possible betrayal and lives at stake, while the Baka boys are merely trying to peep into the girls’ bath. That’s because, I admit, Baka to Test can be enormously entertaining. The episodes leading up to this had been slower than usual, but this arc we get a return to the frenetic, nearly exhausting pace that made the first season so fun. And tiring.

And not just in the battles. The quiet, talky moments go off on crazy tangents, too. One character will try to make a point, get misunderstood, chibi versions appear, then other visual effects, then more characters with more silly lines and visuals, all of them reacting to or affecting everything else. It’s crude but it’s one of my favorite things: when so much is happening, aural and visual, that my brain races to keep up. I’m happy to see the show back in top form.

And while I was writing this, new episodes of Sacred Seven and Baka to Test have appeared. Sigh.