Hoo boy. I could watch and study for hours with all that goes on in Mawaru no Penguindrum 9, but it wouldn’t make any sense to read. Besides, I’m too lazy. Let’s just say that we see things from Himari’s point of view, including the whole hat thing, and that many things hinted at are formally introduced, but it’s too early to figure out how they all fit in.

Not to mention things that might be red herrings, or koi, or frogs. I wonder if the Murakami story is in there for a symbolic reason or because they wanted to riff on the title. The two earliest variations (Professor Azuna and Yana-something-or-other) don’t seem to relate to anything, but they come early in Himari’s search. It’s only when she goes deeper into the library’s annex (and what a library!) that the titles make more sense. As for why she’s returning another Murakami story (well, I assume that “Sputnik Weirdo” is a reference to “Sputnik Sweetheart”) along with a personal finance book and TWO copies of “Christine,” don’t ask me. Enough about books. 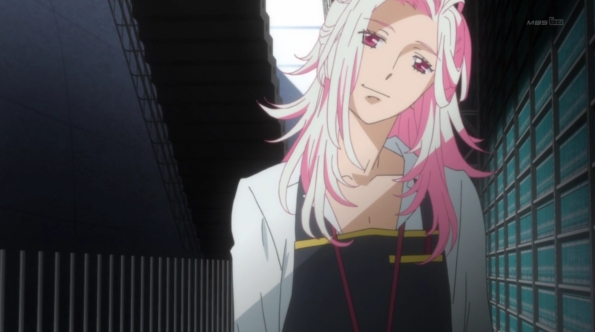 We see things that, if you’re one of those who doesn’t skip the OP and the ED, we see every week. The final people show up. Sanetoshi, the pink-haired guy, is the mysterious library’s caretaker, and it’s he who guides Himari through her memories, though he doesn’t seem to know her details. I’d say that he’s right out of Utena except that, apart from the voice, he’s a trifle more effeminate. But when he tries to kiss Himari late in the episode it’s hard to know which show we’re actually watching. What’s more, he sends her off with an apple that has the penguin mark, calling it the Fruit of Fate. And Himari is the Bride of Fate. There’s that word again. Shouma hates it. Ringo loves it. It looks like poor Himari depends on it to survive. And the hat is her veil, which kind of scares me.

Much of this fru-fru is backdrop and introduction to the “real” parts of the episode, several flashbacks to Himari’s childhood. Put together they’re pretty sad. Young Himari throws a tantrum and accidentally scars her mother. Her friends Hikari and Hibari (Aha! The castanets!) support her, so you think it’s going to be okay, but then Himari leaves school (I assume, because of her illness) and never sees them again. Why didn’t the girls stay in touch? What happened that their last contact was an eraser thrown at her while she was leaving? And then there’s the fact that the friends go off and become an idol duo without her, singing the “rock and roll fight” song that marks her transformations, while she can only wistfully watch on TV. We’re not getting the whole story. In fact, everything in these books are Himari’s memories, meaning we can’t completely trust them.

Two things we’re sure of: these are Himari’s memories, and it was all a dream. That would explain a lot. It would explain why penguin-Himari appears with an elaborate costume in a song and dance number: this is how she wishes she was. It would explain why she’s such a bitch at these times: she’s venting years of frustration and self-hate. Shouma and Kanda are caught in a manifestation of Himari’s dream! That’s it! But of course it’s not. The boys are having their own penguin-related adventures. Himari might be the reason for these adventures, but she’s not the center of penguin universe.

Still, it was good to see things from Himari’s eyes. Her trip down the rabbit hole was as cheerfully bizarre as everything else we’ve seen, so much so that I completely forgot that Shouma had been hit by a car.