The Ikoku Meiro no Croisée finale has another Yune/Claude conflict, Yune trying to track down a nonexistent cat (though the bell sound, ever explained, was a nice touch), a crisis, and we finally learn enough about Claude’s grump of a father to learn why Claude’s a grump himself. Not for the first time, Yune becomes the catalyst which triggers memories and actions from others. To make this less dull, she gets to have little adventures of her own, though the finale’s was especially dangerous. And there’s the bell on the cat metaphor with Yune put in the cat’s position. But in this case Claude thinks the cat, or Yune, actually hates the bell and wants to run away. Mice don’t enter into it except as a toss-off line at the end.

What was Ikoku Meiro no Croisée all about in the end? A comparison of cultures and beliefs. A study of class differences and a romance it kills. A story where a grumpy man becomes less grumpy because of cuteness. A story of a little girl learning to live and make herself useful in a foreign land. These are all simplistic answers, but this was a simple show that tried not to do much but tickle serious issues, show a cute little thing living in a big city, and show off some nice artwork from time to time. And not pander, no matter adorable Yune got.

It’s pretty clear what’s going on in Dantalian no Shoka 10. Violinist Christabel is a robot. She’s going to play a phantom score. When the man who built and cared for her is murdered, she’s going to play a nastier phantom score, out of revenge, maybe, or because she has a soul. All predictable. So I kicked back and hoped the performance would produce some cool animation from Gainax, but apart from a brief appearance of a demon nothing much happens, well, the theatre collapses, but that’s all. All that leaves to ponder is the concept of a phantom score. Since written music is meant to be performed, it makes sense that musicians that played the score all died, but was that from trying to perform it, or reading and studying it? Do they have to be skilled musicians? If I sat at a piano and plunked out the notes (I can’t play or read music) would I suffer a terrible end, too? And what about listeners who are tone-deaf? Unfortunately, that’s a lot to ask a half-hour anime show to tell us.

Let’s see, in Kamisama no Memochou we learn that the school greenhouse was used to grow the flowers needed for Angel Fix, but of course we knew that already, because we’re not stupid. It makes you think that the characters are stupid for not realizing it, but then again, they’re in the show, while we were handed a piece of fiction with obvious clues (the drug’s made from flowers, there’s a greenhouse … d’oh!). Maybe it was the show’s intention to make it obvious to us, since they have other themes in mind, if only I could figure them out. Or maybe they just want to concentrate on the character drama, which means Naruma stands around looking defiant, The Fourth tells him yet again to butt out, etc. I’m sorry, I just can’t relate to this show. 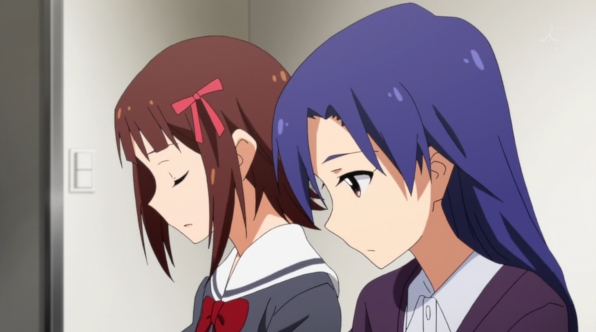 Meanwhile, I skipped one episode of The iDOLM@STER ages ago and it seems to have come back to bite me. Miki’s upset about not getting into that other group that I know nothing about. Otherwise it’s a bland episode where the girls work hard for a live performance, except Haruka and Yayoi are struggling, which leads to some despondency, “fight!” speeches, and yet more bonding. The best scenes come when Haruka stays at Chihaya’s empty apartment for the night. Haruka obviously has a hard time believing Chihaya can live like that, while Chihaya, listening to Haruka talk about her family, begins to think the same way. It works because none of it is spoken out loud. It’s all subtext from glances and reactions. I wish more of the show was like that.

Nekogami Yaoyorozu 11 finishes one story and starts another, the first one bland and the second one bewildering (Marriage? Really?), but there’s one charming scene. The seemingly useless and selfish Mayu tells Amane that in order to do the god-things they’re to do, they need allies. Allies? Where? “Don’t sweat it,” says Mayu, and then proceeds to interact with townspeople in little ways, helping kids win a boss battle, cheering up a crying girl, getting gifts for her trouble and giving them away a minute later, generally showing herself to be a respected member of the neighborhood. These people aren’t the allies she was talking about, but it’s a demonstration of how to behave in society, a productive side of her we haven’t seen before. It’s refreshing. Mayu can be a fun character when she’s not all greed and sloth.