Persona 4 – the Animation is just another introduction episode. We meet characters, there’s hints of threat, something scary happens near the end, and, depending on how much time the show has, the hero discovers his hidden power and transforms, or they put it off for another episode. You can get an idea of how good the series is going to be by how they handle these opening bits. Persona doesn’t start well. We meet Igor and Margaret, a creepy geezer and a robotic lady, and the geezer almost immediately hits us with exposition. Not a good sign. Then we meet the protagonist, transfer student Narukami, who seems to have no personality at all. I know he’s just transferred from Tokyo to the sticks and is out of his element, but he could give us some signs of life. He meets classmates, we jump to a murder, to school, to little Nanako singing a song, a spooky thing happens, we’re back at school (and those are the ugliest school uniforms I’ve ever seen). It all feels thrown together. Oh, and when the scary part happens Narukami does indeed discover his hidden power. I think they ran out of things to do. Not promising.

Mashiro-Iro Symphony doesn’t look too promising either. It’s not quite as bad as the premise: Boy goes to a new school which until now has been all-girl. First off, his sister, Sakuno, is also attending, and other girls from their old school, and other boys, so though we have a harem situation here it’s not going to be a panties-flashing-fest. But what we get instead doesn’t fill me with hope. It tries to be lush and romantic, lots of talk in the intro about the color of girls and boys when they’re together while white snowflakes fall, but mostly fails. The first scene, where transfer student(!) Shingo tries to track down the lost Sakuno while a furry thing hops around being cute, takes nearly half the episode (then she wants to take a bath with him. At least he’s shocked by this). The next day they enter the new school and have a few conversations, all of which take far too long and drain away whatever emotion the scene is trying to evoke. Shingo is a typical dull male lead. Sakuno is a typical helpless, devoted sister. And those are the second ugliest school uniforms I’ve seen today. 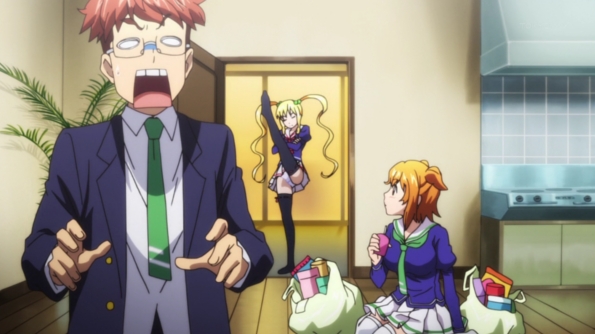 Like Mashiro-Iro, Taken-Ki! has a transfer student(!) boy (Takeru) going to a former all-girls’ school, and it starts out with a romantic mood as a girl named Haruko goes to his apartment to escort him on the first day. However, this mood is undone somewhat by the fact that Haruko’s boobs are unnaturally large and we keep getting panty shots. Two minutes in Takeru falls on top of her and is grabbing her boob. Six minutes later, a girl falls on top of HIM. Near the end, a girl deliberately jumps on him, this just after the second girl has planned to kill him. And all four wind up living in the same dorm room! Himegami still plans to kill him (but apparently it’s nothing personal, it’s ordained), Inako claims to be his fiancée, and Haruko, who has one of those “childhood friend” crushes, moves in to keep an eye on everything. You can’t blame her. During all this, Takeru’s mood goes from bewilderment to fear to lust and back again. Oh, there are student duels to win and powers (maken) to obtain, none of which Takeru knew about before enrolling. … Well, it’s certainly livelier than Mashiro. It doesn’t just plod from one scene to the next. But I don’t know how much I’ll be able to tolerate.

Boku wa Tomodachi ga Sukunai is another traditional first episode, like the others here–with one difference. It’s funny. 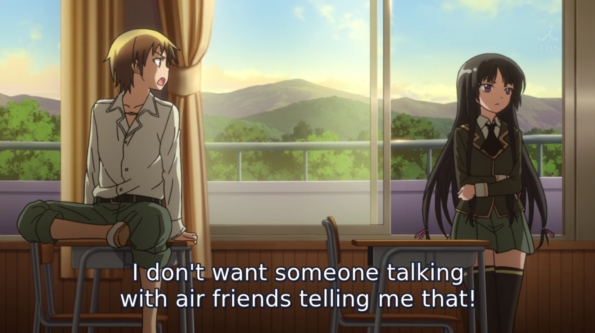 Transfer student (Yes, we’re 4 for 4 with transfer students!) Kodaka is half British, he’s got blonde hair, so everyone thinks he’s a delinquent. An unfortunate series of events his first day doesn’t help. A month later he accidentally sees loner girl Yozora talking to an imaginary friend, and they have, believe it or not, a serious, intelligent (and funny) discussion about making friends and how they can’t make them. Yozora might be a great character. She’s aloof and abrasive, seemingly disdainful of friendship, but obviously a little lonely. She is also just weird enough that you can see why some people might avoid her. Take her “secret message” on their club’s flyer. But she can also cut through bullshit, pointing out that at their religious school “You can get away with just about anything by adding ‘the word of God.'” And in a delightful irony, their first club recruit is someone Yozora can’t stand. These are, after all, people who have trouble making friends. And so it goes. Just about every scene has a good moment, a bit of irony or a killer line (“Air friend!”). If there’s a weak spot, it might be Kodaka. He is, after all, not antisocial. His loneliness is partly bad luck. And while he’s an effective, snarky straight man, he doesn’t do anything beyond following Yozora around doing her bidding. But overall, this series has a lot of potential for fun.