Damn, I still can’t get 10-bit files playing right on my machine. It’s not only the bricks, but the fact that mplayer overwrites each screenshot I take with the next one. It happened last week, too. So this is the only one I got left. Damned if I’m going to play the episode again to get more …

Well, let’s see. Fate/Zero 2 has a lot of scenes of the servants getting to know their masters. We start with Waver and Rider. I hated Waver from the start, and dreaded having to watch his scenes, but Rider is a hoot, the exact opposite of the little punk. What’s more, he’s more than happy to slap Waver around if he says something stupid. Maybe not what a servant is supposed to do, but it adds a fresh dynamic to these relationships. Then it’s a parlor-room scene between Irisviel and Saber, and more talk about goals. Then we meet a fun-loving killer and his accidental servant, Caster; all I’ll say is that the servant/master shows yet another side … poor kid. Waver/Rider are comlete opposites while Ryuunosuke/Caster are of the same mindset, a sick one. It also shows that the show is perfectly able to get cruel and depraved if need be. It will be fun to see what happens when Caster’s desire for the Grail clashes with Ryuunosuke’s … simpler desires. To finish off the episode we get a battle. Wait, one of the servants is dead already? I’m not buying it, or there’s something to the master’s strategy that he hasn’t shown yet. “Go kill Tohsaka. Don’t worry about Archer.” “Duh, yes boss.” Don’t worry … Sheesh.

Ben-To has the best premise of the season, one of those “only in Japan” type ideas. But this doesn’t mean the show is going to be any good. Take that show where they mixed baseball with Peter Drucker. Awful, just awful. Ben-to, however, has a more promising start. Our hero, Satou, finds himself unconscious in the supermarket and nobody caring much apart from a white-haired girl who says something through the window. It’s only the next day when he returns that things become a little more clear: he was a victim of brawl over the half-priced bento. On the third day, bandages and all, he finds himself competing, only to get knocked unconscious again thanks in part to the girl, known as the “Ice Witch.” There are lots of good little bits strewn throughout: the brawl doesn’t start until the guy with the half-price stickers is finished and leaves the floor. Afterwards, two opponents say a cordial goodbye, until tomorrow. Some of the characters are interesting, like Oshiroi, the bespectacled thing who is too fascinated by Satou’s injuries–Aoi Yuuki strikes again. We’ll have to learn more about Ice Witch Sen. Satou scores points by being both appalled by the fighting and drawn to it–or maybe he’s just starving. Yes, the series has promise. But my big question is: how the hell are they going to milk an entire season out of this premise?

Mirai Nikki follows Amano, a weird kid, who likes to observe rather than participate, which means he doesn’t have any friends, except for an imaginary one (Air Friend!) named Zeus. Turns out Zeus is god himself, and for kicks he sets Amano’s phone diary to show what will happen in the near future. It’s great for Amano at first, aceing tests, avoiding bullies, so we’re waiting for the bad stuff to happen and to get some moral lecture, some monkey’s paw type conclusion. So I’m getting a little bored … then the show ups its game. A girl named Yuno seems to know too much, and then his phone diary announces his death. Suddenly the show has gotten interesting … only to fall a little flat as there’s this serial killer to dispatch, and Deus shows up again and explains the rules to what turns out to be a twisted game. Last one left standing becomes god. Looks to be a confusing time-paradox type of show with lots of mayhem, but with one difference: Yuno is another contestant, and she swears she will keep Amano alive, which is good, but she’s a stalker who’s out of her mind, not so good. I don’t normally care for shows like this, but when it was on its game I was fascinated. Also, I didn’t expect the funny coda. If the show continues to keep me off balance, I’ll keep watching.

Squid girl II 2 had it’s best moments early on, when Ika goes to the elementary school and rouses the kids to join her in her plans for invasion. That’s it! Infect their minds when they’re young! She should have thought of this before! Too bad an incident in the playground distracts her into a silly soccer game. As for the other skits, hmm, I can’t really remember. Cosplaying and weight loss.

I started watching C3 confident that it would remain the same–dumb and predictable, so I could safely drop it. But the show had other plans. Mainly, this woman showed up.

After the usual first-day-of-school shenanigans this crazy lady named Peavy Barroy comes out of nowhere and attacks our cute little girl now named “Fear Kubrick.” Harauka and Konoha join in the fun, and it’s soon blood and screaming and distorted faces. Not only that, it’s directed well and looks great. Alas, I have to keep the show for at least another week. 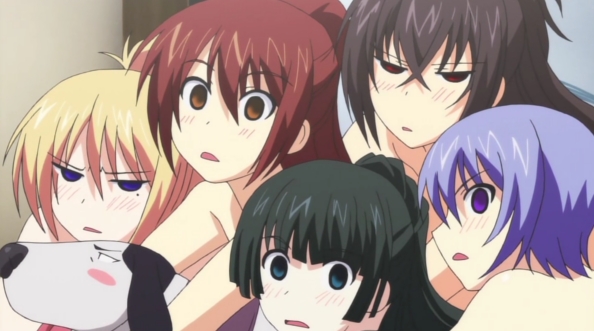 So I watched ep2 of Maji de Watashi ni Koi Shinashi. Last week everyone was playing military games and it wasn’t very interesting. This week they go after a lost dog and discover a warehouse full of weapons, henchmen, and ninjas. It still isn’t interesting. The hero is bland, though his sister is a lot of fun. Miyako can’t go a paragraph without an innuendo. The others just run around. Even the dog was dull. Dropped.