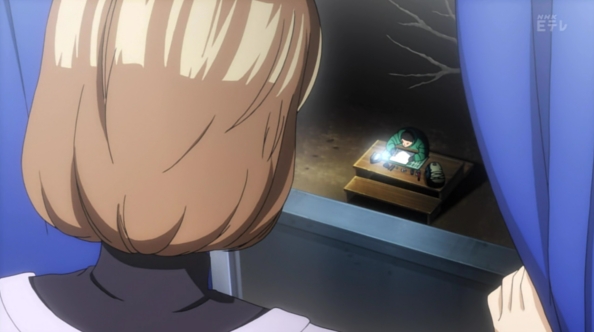 Bakuman II 3 is no different from the others. Our boys keep working and concentrating on their dreams and a speed bump slows them down a little. This time it’s Nakai, Aoki’s assistant, who’s been ditched because Aoki wants to do something less shonen-ish. Nakai swears to work outside her window to show his dedication to her work. Sort of like a mangaka stalker. The fact that Nakai is in love with her complicates matters, and the fact that she is planning to collaborate with the young, flashy pop idol Koogy. But at least the story concentrates on Nakai and Aoki as professionals, so when she returns to him it’s out of a newfound respect for his work. But still, the whole relationship is a tad creepy. I frankly don’t believe Nakai worships her manga abilities that much, no matter what Saiko thinks. Meanwhile, our heroes can’t concentrate on their own work out of worry. This is almost more interesting than the odd love drama they’re witnessing. Fukuda tells them to forget it, concentrate on their own work, but they can’t. How do you balance a precarious professional career with the concern you have for your friends? The episode doesn’t delve into that, just hints at it in passing.

Mashiro-Iro Symphony 3 is also no different. It just plods along, from scene to scene. Some of the silent moments are supposed to be fraught with emotion, but actually they’re simply dull. Then the scene ends and they move to another dull scene. As for plot, it’s basically Sena and Shingo working together as class reps, Shingo still getting the hang of it and Sena bitching at him. Then he gets better at his job, other girls start turning to him for help, and sure enough, Sena’s heart begins to defrost. We get so many long, dull moments of Sena wavering that I thought she was going to confess right here in episode three. Sena’s about the only interesting character of the lot, so I hope she can keep up her tsundere persona for a while longer. Because after that the show will have absolutely nothing.

For the first time, Boku wa tomodachi ga Sukunai 3 has some lengthy scenes involving Sena. Unfortunately, they’re not terribly interesting. We learn that she’s very good at what she tries to do (in this case, learning to swim), and she’s spoiled. When Kodaka tells her off, and she’s moved because it’s the first time a boy her age has done so. So Sena, though more interesting than Mashiro-Iro’s Sena, has some predictable traits. And we learn that Yozora was his childhood friend, and that Yozora knows it but Kodaka doesn’t. Another sign that this might be just another school anime after all. Never mind, there are still plenty of good bits: Sena is forced to read the lines of an eroge to prove it’s not dirty, and Yozora secretly recording the whole thing. That’s the sort of misanthropic behavior I watch the show for, and it was especially welcome after enduring Mashiro-Iro Symphony. We also meet Kodaka’s little sister Kobato, a cute little thing who quotes gothy lines. I thought at first meeting “She’s fun. I hope we see more of her.” Sadly, we see too much when she jumps on top of him naked when she’s upset. Well, again, it’s worth enduring a few predictable moments and lapses of taste if I can have Yozora snarking at someone.