First, it’s time catch up (by one episode) on the two shows I’m watching that have backlogs. The thing is with shows like these is that they’re usually the ones I’m enjoying the most. I’ll be about to click on one, but think “I think I’ll save it for when I need to watch something I know is good.” And a day passes, and another … And now I’m thinking I’ll just watch one of each, because I want to save one for when I need to …

Ben-To 3 brings us new contestants in the battle brawls. Geez, is there anyone out there who DOESN’T fight for bento? 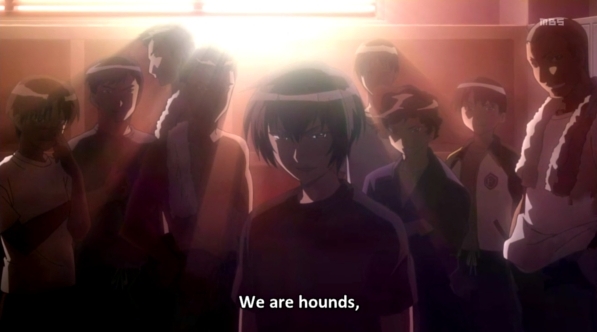 This is after a bizarre opening involving You running around in his underwear, for reasons we’ll learn soon enough, in fact, quickly after the credits, when Ume decides to punish him because Oshiroi hangs out with him too much. You know, the usual. Meanwhile, Oshiroi is proving herself to be the most entertaining character of the lot. Even if she’s really not involved in the scene, furtively looking at You in his underwear, she steals the scene. Anyway, You is invited to join the Hounds, yet another batch of people after the bento. In their spare time they’re the schools kendo club. And they have strategies which make it relatively easy for them. Easy food! So tempting!

But the show makes it clear that something’s wrong with this. First, they’re “hounds,” like in dog, and You is striving to be a wolf. And You is not satisfied with the food he wins with them. We know why, and the show, alas, doesn’t do a great job of making him realize. He just reminisces about a game he used to play, pauses, and Sen smiles. And while the next battle is fun to watch, well, they all are, I don’t quite like how You makes his decision to leave the Hounds. They gave him an invitation and allowed him to get a taste, so to speak, with no pressure and the utmost respect, but he turns on them in the middle of a brawl. Not very classy, even if the kendo instructor does not disapprove. Other than that, it was another fun as hell episode.

The other trouble with having multiple episodes around is every now and then I get sloppy and click on the wrong one. Which is why I’m talking about Working’!! 5 today, not 4. But with this show, does it really matter what order I watch it in?

The little events are as follows. Everyone grumbles because Kyoko’s lazy and spoiled and eats too much of the restaurant’s food. Yamada decides she wants to be spoiled, too, more parfaits are eaten, to the point where Kyoko isn’t allowed any more food, and they find a lost little girl, and SHE gets spoiled. The gags mostly work. The show lets the characters drive them home. You can imagine Takanashi’s reaction when he finds the cute little girl, and the other characters’ reaction to his reaction. And the show has gotten good at using beats before gags, or tossing the gag out in different ways, such as an inaudible conversation between Yamada and Takanashi. What’s more, Inami didn’t hit anyone! Not once! Yeah, this show has taken a step up in quality since last season.

At the end of Guilty Crown 2, a noitaminA show, for chrissakes, the sexy thing Inori who has all these weird powers, did that standard anime thing and transferred into Shu’s school. Maybe it was just an aberration. Nope. The next thing you know, Shu goes home and finds Inori has moved in. To “protect” Shu, because he had been spotted in the raid by a schoolmate. The rest of the episode mixes wacky high school hijinks, poorly done, with a more serious issue of what to do with the witness when they find him/her. The morality issues were handled well, in fact, much better than expected, with a surprise ending that made me think this might be a better show than I expected. But there are a hell of a lot of flaws in this thing. Inori, supposedly sent to protect Shu, did a piss-poor job of it. The boss of the Undertakers, or Funeral Parlor, whatever, having shown his visage on TV, walks around the city like he’s no terrorist at all. Maybe it’s that Void thing he has. As for those voids, they’re not a bad invention, at least in how they manifest, but right now they just work as a gimmick to drape this show around, like many other anime SF shows, and certainly not like a noitaminA show. The disappointment continues.

I guess C3 is like too many other shows that tries to do several types of shows at once and makes a mess of it. Which is not to say that it’s all bad. As I’ve said before, some of the visuals are fantastic. When it decides to do dark and bloody, it does it with panache. This week we saw the end of the battle with ,,, er … I can’t remember her name, so, in honor of her favorite word, I’ll just call her “Bitch.” A fitting name for such a twisted girl, and the show loves to show every sneering pose of hers in every combination of angles and colors and art styles they can think of. I got the impression that the animators really loved this character. It’s like a labor of love. I thought she was a one-trick pony myself; you note how I can’t even remember her name. But they did such a great effort with her defeat, a montage that made me actually pity her, that I feel kind of bad that I forgot it.

The show’s concept isn’t all that new. Fear has to learn to control herself in order to free herself from her past as an instrument of torture, i.e., she is a potential time bomb sent to live with your typical harem lead male, with (so far) two buxom girls vying for attention. Laying on thick slabs of cult-babble doesn’t add to the originality, either. Let’s see, Ueno, the class president, who had been patiently waiting at the door since last episode for the Bitch to take her hostage and slice her up, turns out to be Not Dead Yet because of her cursed bondage underwear, called Ginstrang’s Love, and also has the River of Black Strings as a weapon. She’s an ancester of Chia, but is not a member of the Knights of the Rear Guard but instead an unwilling helper of a research institute called Nightcrawlers. Hmm. The Index franchise does names better. The Bitch’s sword (Dance Time!) notwithstanding.

I don’t mind a mash-up of bloody supernatural combat with cursed weapons with silly harem hijinks, but C3 just doesn’t do it well. The fake sex business near the end was tiresome, not titillating, and nothing really comes together well. But it looks so good that I’ll keep watching.