Guilty Crown 4-5 brings us Shu’s indecision between following a repressive regime who thinks it’s saving the world from evil viruses, and the rebels headed by a megamaniacal handsome guy who everyone claims is wonderful. He wonders if he’s just jealous because of Gai’s charisma and the fact that everyone follows him blindly and tells Shu to shut up whenever he asks why, jealous because Inori seems to be shacking up with him, pissed off because Inori lied to him about her feelings (in fact, the lie is a lie, as she broke orders during to raid to rescue Shu). And he has that little pen which could bring the regime down on him. Meanwhile he is training with the Funeral Parlor, so we get all the “newbie in over his head scenes.” Shu is a wuss and maybe a turncoat (he hasn’t decided), but I share most of his suspicions. I don’t like either side. At least the show makes it clear that we’re not supposed to. And now that they’ve apparently blown Gai up, who knows what will happen next. It’s done in a ham-fisted way, but once again, the action scenes are great.

With UN-GO 5 the pattern is pretty much set. Shinjurou will try to find a murderer, while the crime’s circumstances lead to the exploration of more philosophical issues. With this one it’s the concept of sacrificing your life for others. Cynical Shinjurou doesn’t believe it’s possible; people are too cowardly and venal to do it of their own free will. He’s wrong, and meets his first humiliation of the series because of it. However, it only leads himm to refine his view. People can die for others, and it’s beautiful, and it makes the people who survive because of it even scummier. Or something like that. To prove it, we get the gold bricks denouement, which really doesn’t prove anything except that Shimada was a scummy guy. On the other hand, that was a terrific way to introduce the murder: have the corpses roll out of a sculpture during a public unveiling. Excellent bit. Oh, and I’m glad that Kazamori is going to be a regular in the series from now on.

I’m thinking of dropping Kimi to Boku, and I’m rather sad about it. I liked the first episode very much, the deadpan delivery, the slow, lazy nature of the whole thing, but after episode 2 it became clear that that was all it had. Yuta and Yuuki will continue to antagonize Kaname no matter what, the blond kid will remain forever clueless … It’s a wonder they’ve remained friends all this time. If they don’t throw in a new wrinkle soon I’m going to lose my patience completely. As for episode 6, it’s mostly flashback about when Kaname started to wear glasses, with the usual cat metaphors. 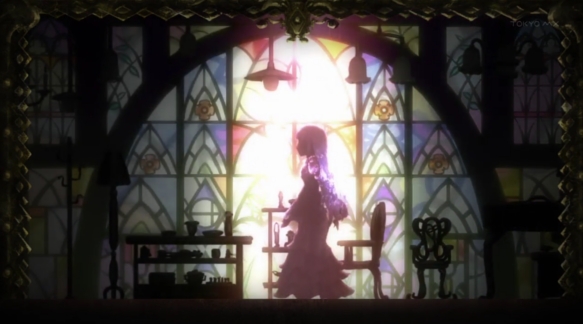 C3‘s latest story arc has left such an impression on me that I thought I had skipped an episode, because I couldn’t for the life of me figure out what was going on. Konoha was injured or something? All I remember was Sovereignity and dolls. Not that it really matters. With Horizon I watch because it’s more fun not to know what’s going on. With C3 I watch because of the endless visual treats it gives me. Who cares about Fear’s curses, or the curse of Savernity, or whatever. Give us more moments like the above. 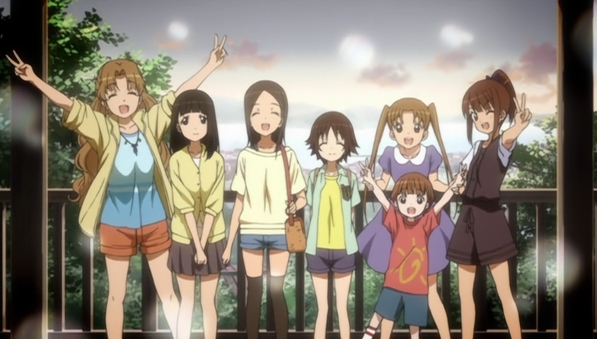 Tamayura – Hitotose has found its groove. Episode 5 is cute and sweet and gentle without being dull or cloying or annoying. The fact that it begins with Fuu meeting a biker gang certainly helped. That was the last thing I expected to see in this series. Even after it had settled down and reintroduced the teary Chihiro, it floated along smoothly in that way these type of shows are supposed to do. At one point the girls are admiring the view, the music is fading out, and I expected a new scene to start. Instead, the scene continued, the silence now making its own statement. The episode’s main point, that shy Chihiro was glad that Fuu had new friends but was lonely herself, was understood throughout but so understated that no one bothered to bring it up untl the very end, when the girls all pronounced themselves new friends of hers. I hope this show can keep it up. 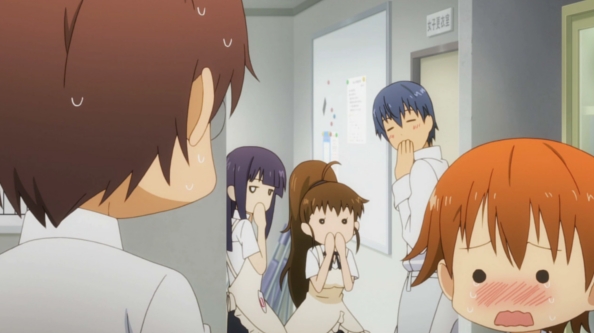 Working’!! has been in a groove for a while; episode 6 just keeps it going. Having the manager’s minions come in to work, was a good enough story. “I fell in love with the way she beat up my brother,” is one of the show’s better lines. The second half was more affecting. Part of it was some satisfaction I felt when Takanashi finally snapped. I can’t say his answer to Kyoko’s question was any better than hers, but he’s put up with way more shit than anyone else in that restaurant. It’s about time he let some frustration loose. The resolution was sweet, and the inevitable gag was perfectly timed.

Hey, I’m sorta kinda getting caught up! Only 12 more episodes in my queue!