From the setup, I didn’t think Inu x Boku SS would be such a sweet show. I’m sure we’ll get darker material soon, but episode 2 makes this feel like a friendly monster series rather than a dark one. We saw hints of what it could become last week, but this time there is no major crisis, one minor one, and the thrust of the story had to do with loyalty and seeking rewards for it. 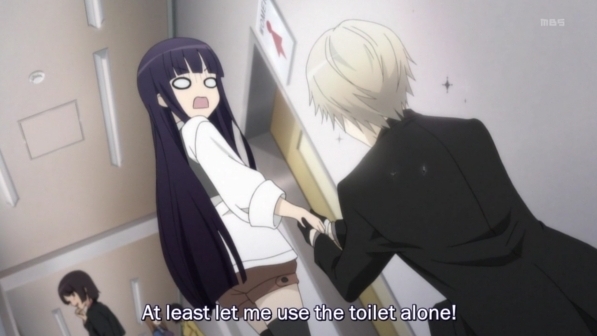 We get a lot of Soushi’s declarations of eternal loyalty for our tsundere heroine Ririchiyo … Can you call a character tsundere if we see all her inner insecurities right off the bat? Much of the charm of the tsundere, apart from her method of abuse, is the moment when you see the gap in her defenses, a peek at the dere inside. But we already know what’s going on Ririchiyo’s mind. We already know she’s messed up and why. Technically, I don’t know if she qualifies as a tsundere or not. … Anyway, we also see that she isn’t taken aback by Soushi’s actions; apparently she saved his life once and has quite forgotten about it. She is bothered by her faulty memory and by the fact that in spite of his annoying tendencies to do everything for her, he is sincere and should be rewarded somehow. And so lies our story.

Such as it is. Much of the episode involves shopping for things, with Sorinozuka tagging along for no apparent reason except to add some humor relief and contrast to Soushi’s sparkling. It’s pleasant, but you figure they have to toss something dark and supernatural in sometime, so they have another Ayakashi Kan tenant, Kurata, vanish. With what little we’ve seen of this weird girl (with the scariest supernatural persona of the bunch) we should have known it would come to nothing, but off they go to search. Interestingly, Ririchiyo is the one who charges out first. She doesn’t do much to back up her “don’t care” claims. And so we get what amounts to the threatening part, which really isn’t all that threatening. Just annoying. By the end we’ve seen a lot of gags and Ririchiyo has decided the only thing he can do to reward his faithful dog, er, Soushi, is be a friend. It’s done sweetly, as I said, but it’s not overdone, though I wonder how much of this we’re going to see in a supernatural show.

The workingman’s anime, Bakuman II, concentrates on being a silly romantic comedy for episode 15. It does pretty well.

Lets see. Kaya is angry because she thinks Takagi is seeing Iwase and/or Aoki on the sly, and Miho is mad at Saeko because he lied to her about it, and about the romance between his uncle and her mother long ago. Right there we got prime soap opera material. I hate soap operas, so I’m happy to report that they veer off this mindset almost immediately by having Saeko get equally mad at Miho, also, no one’s done anything actually wrong! The most they’re guilty of is trying to be decent to people to the extent it causes misunderstandings–and then lying about it to prevent the misunderstandings. So all we got to do is sit down the appropriate people and have them talk it out. And fast! All this moping and sticking noses in the air is beginning to affect their work, and they just got first place for their latest story!

A good romantic comedy will pile on the misunderstandings further, but before that we get some disgraceful behavior from Nakai. Aoki’s story finishes second because of the artwork. The editors (struggling with their own internal politics) suggest Nakai take over that job. I never thought even Nakai would behave the way he did when she asks him, but her reaction is the most satisfying moment of the episode. No, the most satisfying moment was when we get another potential embarrassing moment for Takagi, in a moment of ridiculous coincidence found only in romantic comedies, but it ends all right with everyone happy–BECAUSE THEY TALKED IT OUT! Oh, and Takagi proposed. That certainly helped. Now Kaya and Aoki are friends, and everyone’s happy. Thank heavens. This plotline was threatening to get tedious, but I have to admit it was fun watching them close it.

Natsume Yuujinchou Shi 3 gives us a single-episode story to make up for the relatively dramatic series opener. I mean, how dramatic or important an episode can it be if it has tribbles in it? Time to kick back and relax as Natsume rescues a karu (tribble) from some crows and takes it home. Later a youkai whose name he’s returned threatens to burn down his house if he doesn’t return the house gets burned down. Somehow he recalls the ring snagged on the karu (whom he’s named “fluffball.” For a boy gifted with certain abilities, Natsume doesn’t often show a lot of imagination), and now has to track down the little thing.

The other problem is that the karu are little-known and misunderstood even by other youkai. Hinoe and others plan to drive the critters out. As for the karu, they prove to be a reasonable lot–unless they’re threatened. It’s just right sort of small episode the series needed after the big stuff. Next week it looks like another bittersweet story, Natsume’s speciality.