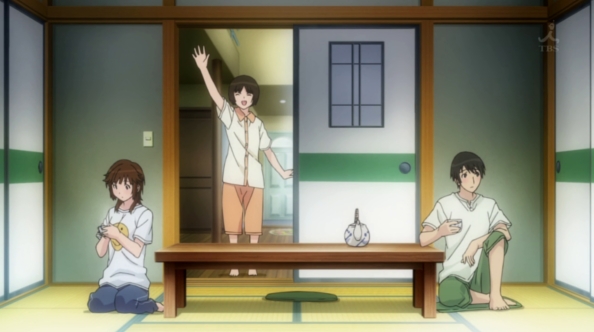 Amagami SS+ 4 has almost nothing to it. Even that so-called cliffhanger last episode is resolved the way you’d expect. Makabe just shrugs and walks away. Junichi is quick to decide he’s in love with Rihoko–all it took was that overheard conversation and a flip through a scrapbook. Now all someone has to do is confess. Naturally this takes forever. First one of them has to get up the courage, then the conversation’s always interrupted, usually by Miya (after a drought of Nishishishis up to now, this episode almost overdoes them). I was torn by this. Those nervous pauses and the blushing and stammering get old pretty fast, best if they got the words out. On the other hand, Miya prevents the episode from getting completely dull. To everyone’s relief, Junichi says the words. Congrats, Rihoko, you bagged the boy. Now we can move on. It’s Ai’s turn next. I wonder if they’ll keep the hot metaphor going?

Papa no Iukoto wo Kikinasai! 4 isn’t showing any improvement. They lay off the emotionally manipulative bits for the most part, but that leaves an episode where Yuuta goes to work and the girls make a mess of things without meaning to. Oh, and going to the laundrimat and not wanting to clean onii-chan’s clothes, or something like that. I thought about skipping ahead after the umpteeth time a girl tried to do something only to trip on something and spill something. Since taking the girls with them was hastily thought out, I’ll forgive the fact that they hadn’t yet thought out the details about buying food, doing laundry, and how to save money. But only for a while. Meanwhile, that club Yuuta joined shows up to complicate his life. They’re not much, but at least it’s something different to spice up the series a bit. I really think Raika should meet the girls. That would liven things up.

I just don’t know what to do with Aquarion EVOL. I’ve been tempted to drop it before, then an episode like #5 comes up which almost makes sense and uses it’s love/sex as flying robot power so extravagently that I can’t help but smile, and then dumps a bit of senselessness at the end. For maximum Aquairion power the students must be on the border of love but not in love (or the robot goes beserk), or is it not love but libido they’re talking about? Not to mention Amata’s tendency to float in the air when excited, and the little torture devices they wear when they’re close to the edge, so to speak. Sigh, I can’t drop this show right now. It’s too silly. 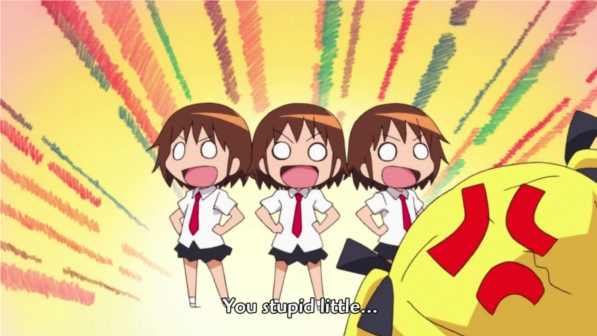 Kill Me Baby 4 is all hot weather clichés for the first half, Yasuna wanting to win a free popsicle, trying to smash a watermelon, that sort of thing. It gets better when assassins for some reason decide to go after Sonya. The first one is amusing enough, the second is better. Two different assassins, unbeknownst to each other, decide to disguise themselves as Yasuna. They have Yasuna’s blinding intellect, too. Of course, the real Yasuna has to come along and join the assassins, because, of that blinding intellect I mentioned. Some good gags come out of it. Never mind Yasuna, why does Sonya put up with other assassins in that world she lives in? Maybe that’s why she goes to school: to get training for a better job.