Nisemonogatari 7 finally ends the Karen Bee arc with what feels like little more than sophistry.

We get three conversations, the first, Araragi/Karen being the shortest and most violent. The upshot again is that the being right doesn’t mean much if you’re not strong, that being strong isn’t meant in a physical way, but in your will, and that sacrificing yourself for others puts you at the mercy at the will of others (mostly conversed about while Karen is beating the crap out of Araragi, perhaps symbolically, since the highway cloverleaf couldn’t have sustained all that damage without anyone noticing, and Araragi’s wounds healed instantly … well, he IS part vampire …). I’m not sure I agree with the third part. Self-sacrifice is an act of will, anyway, and there’s nothing to say such an act is actually the will of others, but rather, because of what is right. It’s also ironic that Araragi trumps most of these arguments because he’s acting out of concern for his sisters, not because of self-sacrifice, but because he loves them. Anyway, he gets her home safely and we move on to the biggest and most confounding conversation:

Senjougahara/Kaiki, with asides to and from Araragi. Part of the problem here is that Kaiki is a con man and, as Senjougahara says, you can’t take anything he says seriously. But she says that early on. We get several minutes of maybe lies and half-truths from the man. Some of it is con-man talk, how he doesn’t believe in the supernatural but knows the people who do, thus making it easy to con them. Yet without being told he is aware of Araragi’s taking half of Karen’s poison within him, so this is a lie. Whatever he says, he isn’t able to make much of an impression on Senjougahara, who knows all too well what he’s capable of. And when it’s over I was disappointed. Kaiki might have been right about being a fake, undramatic man leading an undramatic life, like the others in this story, but that doesn’t mean I didn’t want to see him getting his ass kicked like Karen did to Araragi in conversation 1. The third conversation, Araragi/Senjougahara, simply ties up the loose ends. Kaiki had said that Senjougahara had been in love with him before, while Senjougahaha dismisses it as infatuation with someone who might help her. Who’s right? Kaiki’s line that there is no truth might be right, after all. Well, it’s over. I guess next week it’ll be Tsuhiki’s turn to get into trouble.

Kaoru was my favorite girl of the original Amagami SS series. She was so lively and since she and Junichi already knew each other well the story didn’t have to spend time getting the two familiar with each other. In Plus, nothing has changed. The two together always seem to be having an adventure. Now they get a real one when they budget bus tour they take strands them at a rest stop. I guess it’s better than the Ai conclusion; it has scenes of them being silly together and shocking the passers-by. I could watch that for 25 minutes and not have a crisis, but oh well. I liked the comment that all they do now that they’re lovebirds are the same things they did before that. How they’re going to get past that while alone at a rest stop, I don’t know. 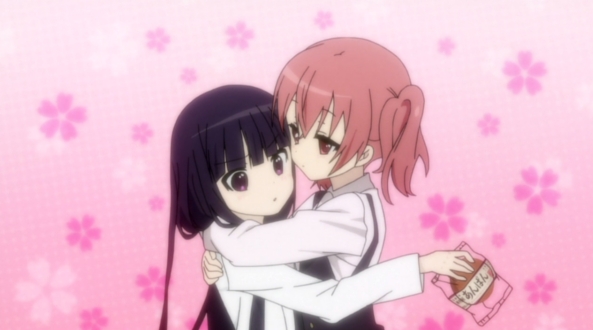 Inu x Boku SS 6 is supposedly about Karuta (Not the game, that’s another show) and how she’s actually just as perceptive about people as anyone else, if not more, but I think it’s really about Ririchiyo and her ongoing struggle to interact normally about people, which isn’t to say that the Karuta stuff isn’t fun. Spacy girls who do weird things are usually fun in anime, not only for themselves but for what the people nearby make of them, and here it’s more fun than watching Ririchiyo trying yet again to figure out her own behavior, where the problem is more execution than intent. She goes into snark mode out of habit, but sharing her lunch with Karuta was a natural act of kindness. That Karuta later returns the favor isn’t unexpected; she’s not as hard to figure out as the creators are making her out to be, probably because the show is predictable. Fun to watch, but predictable.