Hoo boy, with Nisemonogatari, half the time I don’t know whether to be appalled and amused. But I try to keep my perspective.

Let’s start with the “amused” part. We wrapped up the Karen arc last week, and this week I fully expected an arc starring the littler little sister Tsuhiki, a rather mysterious thing who really hasn’t gotten much screentime yet. And this week we start with Araragi’s brief monologue about her, suggesting that she is immortal, and, of course, another fake. So the episode starts in earnest and what do we get? An episode-long conversation with Karen! Not that I dislike Karen but she had her time, seven episodes worth … Okay, we didn’t get to see a lot of her, in spite of everything this is Araragi’s show, but still … The conversation is livelier than some others, often the case with the ever moving, bouncing, attacking Karen, but little is really discussed. Karen wants to meet Kanbaru and asks Araragi to introduce her. When bouncing around in a short skirt doesn’t work, she tries completely supplication, then violence. The usual for Karen, and fun to watch. As for Araragi, he doesn’t want to the two to meet because of Kanbaru’s … proclivities, which is a laugh considering what the two get at next.

As for the “appalled part,” there’s a sexual undertone that the show likes to emphasize whenever Araragi chats with a female, which is almost all the time. It doesn’t matter if the female is Senjougahara or Karen. We’ve already had lots of it this episode when Araragi proposes a contest: if Karen can stand Araragi brushing her teeth for five minutes, he’ll introduce her. It sounded innocuous to me, too. His point was that he was going to invade a personal part of her body, but come on, don’t tell me Karen’s never seen a dentist before. So he starts to brush her teeth. Turns out Karen gets turned on by it, Araragi too.

I’m getting slightly appalled here. After Tsuhiki (finally!) appears and goes off to buy an awl to kill them, breaking the spell, to my surprise they talk about going right back at it. Now I should be appalled and I am, a little. But then I think back to other episodes of this series, or go back to Bakemonogatari. Like when it looked like Kanbaru’s sexually assaulting Araragi at the end of that one episode. When the next one begins it’s like nothing had happened. And that’s the point. Maybe nothing did. You can’t take half of what they show you in Nisemonogatari seriously. Look at that moment when Tsuhiki leaves–through the wall, or the fight Karen and Araragi had last episode where he was flung against concrete bridges. Did that actually happen? No. So I’m not too worried that they show us something that might appall me. Not too worried. 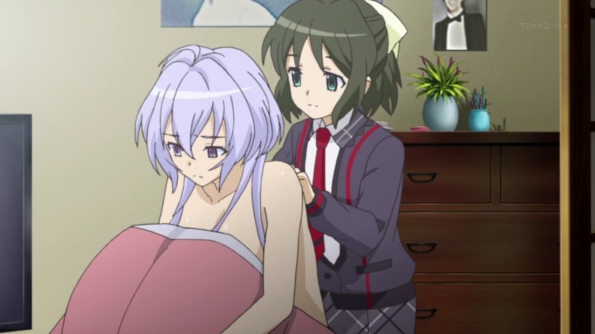 Senki Zessho Symphogear 8 starts by throwing us a curveball. It’s not a stroke of genius, but it is clever plotting. Okay, not showing us how Chris got away from her boss was either laziness or a missed opportunity for action, but to have her, on the run from Noise, exhausted and collapsing, meet Miku, was a pleasant turn of events that I didn’t expect. Okay, you pretty much knew how it would play out after that. Miku shows Chris some basic kindness, Chris is unaccustomed to this but tries to repay the words with advice about her estranged friend Hibiki “Beat the crap out of whoever it is.” Chris is fun as hell in her current state. Trying to atone, trying to recover from yet another betrayal, and abrasive as hell. The Hibiki/Tsubasa co-advice scene isn’t as interesting, mainly talk about making flaws strengths, how songs aren’t just for destruction but can be inspirational. The battle scene is absurd, with Miku insanely wanting to help by running out there to attract the noise, though Chris’s part in it was just fine. So now everyone is friends again. Next up is more Chris rehabilitation and a scene where she and Hibiki pair up to do some noise control.

Amagami SS+ isn’t living up to the original series. Thinking about it, I don’t think it really could. The original story arcs were probably better planned and were already guaranteed some quality from the original series. The new series feels tacked-on with less time to make each story really compelling. Plus, in every instance but one, Junichi’s already got the girl. What happens in “happily ever after” isn’t going to be as interesting. All the show can do is depend on the characters and come up with a couple sparks of the old magic. Which is what happens with episode 8. Kaoru was my favorite girl for a few reasons, but mainly because she and Junichi could have fun together even if they weren’t lovers. The story of their getting stranded and getting through it (with the utterly absurd but somehow fitting rescue via Umehara) was an example of just that. They argue a lot. They have further adventures. Junichi’s mind wanders like it does. Finally, they both realize that it’s more fun to have fun than to bicker. Sorry to see Kaoru go. Time for Sae.

Papa no Iukoto wo Kikinasai! can be appalling, too. It’s got three disgustingly cute underage girls who all adore their uncle in-law, and while the fanservice isn’t high, at least for the girls, the show can’t resist a scene where the three join Oda in the bath. I thought it would be great for Oda, a harmless weirdo, to meet the girls, then she did, and nothing much happened. She likes them, they like her, except that Sora’s jealous, hence the bath together. Nothing much more than that. Why Sako comes along when everyone thinks it’s a bad idea is anyone’s guess, and here the show hits its low points. Not only is behavior appalling, but they add a split second before each of his comments, as if the show hit a bump and bounced out of rhythm. More interesting is watching Yuuta coming to grips with making enough money to go to school, pay for the girls’ school and Hina’s daycare, not to mention putting food on the table. These problems are not fun but they’re real, and they’re the type millions of people face all the time. Thus, the unexpected whammy at the end hits especially hard.