I don’t know how I managed to fall two episodes behind with Rinne no Lagrange … well, I neglected to download 10, tried to watch 11, and say “Wait, what’s Madoka doing on that boat, and why is she so pissed off?” 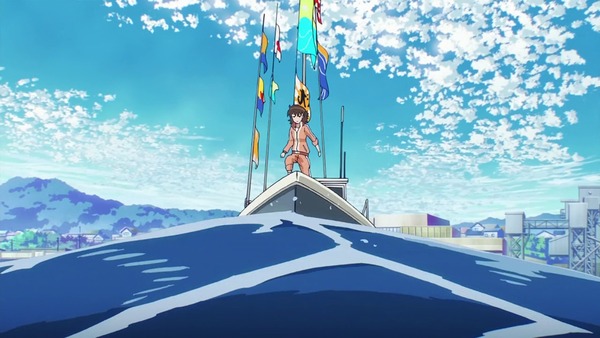 After watching episode 10 it’s easy to understand why. She was betrayed by her two best friends and by the organization which she’s bailed out more than once. Not that you’d know it from the first half of the episode. That’s full of predictable school festival scenes. Maid costumes (well, modern-day school festivals), food, haunted houses. It has the same light spirit as episode 9, but it’s too early, so you know they’re going to change the mood sooner or later. It’s hard to read why Madoka gets so gloomy when Lan and Muginami get dragged off to help other clubs. Asteria, who’s suddenly there without any explanation or reason, claims it’s because she’s afraid she’s going to lose someone she loves–again. Maybe that’s true. Madoka has accepted not being allowed to fly her Vox, but she doesn’t like it. But when she learns that there’s an invasion eminent, and that Asteria AND HER FRIENDS knew about it and didn’t tell her, that’s when she snaps. I don’t blame her. Not being allowed to fly is one thing, but not even being allowed to take part from the ground is a slap in the face. Now I know why she’s on that boat, pissed off.

(pause to watch other stuff and then episode 11 … Okay, I’m back) Episode 11 is a classic pre-finale bang-up. It starts grimly, putting everyone in danger, then hints at a turnaround. The turnaround comes, triumphantly, then a last-second shock to change the whole picture. Oh, and there’s changes of heart from various important participants.

What I’m amazed at is, like Ano Natsu de Matteru, how obvious the whole thing is, yet how how strong the effect. You knew Madoka would get on board her Vox, though I wasn’t expecting Asteria to get talked into it by Youko–I was hoping Tadokoro would be allowed to act on his own. You knew the so-called bad guys would turn, especially after Villagiulio’s “tainted heart” speech. You knew all of it was coming, yet I, for one, was at the edge of my seat the entire time. And some of it I didn’t expect: the townspeople’s message to Madoka, for one–never mind that it comes during the battle yet she still can turn and admire it for a few seconds. There are moments like that that you forgive in a show like this.

One thing that I know enhanced the effect for me was the music. From the moment Youko is lecturing Asteria on triangles, past the moment where Madoka is cleared for takeoff (where what I call the “trippy” theme is first played) up through the town’s message, it builds from some scattered violins to a moment of joy. And is then cut off by the enemy blast intent on destroying the city. Now, in Symphogear, Hibiki is supposed to be torn up because of the threat to her school, the place she called home, but we got no sense of why she should care that much, only that we were told so. But Madoka’s love for Kamogawa was introduced at the very start, and strengthened episode by episode. So when the blast hit the town, I worried too, which made its rescue at the hands of enemies all that more delightful. 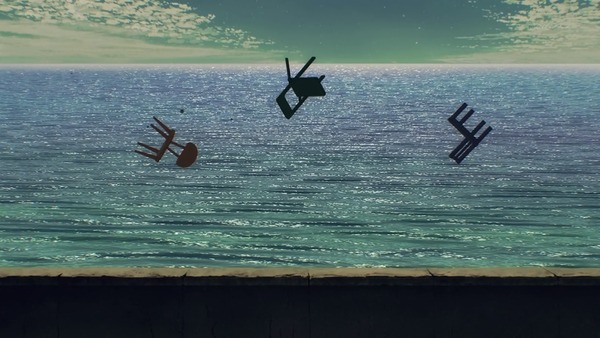 As for the shock at the end, we have two things to clear up. First, is Youko actually dead? If she is, will Madoka managed to get back in control? The second of course is the mystery of the demon and those flowers that float down (the other use of the trippy theme, BTW). I’m sure we’ll get our answers, but I doubt that the conclusion will be as exhilarating as the buildup was. 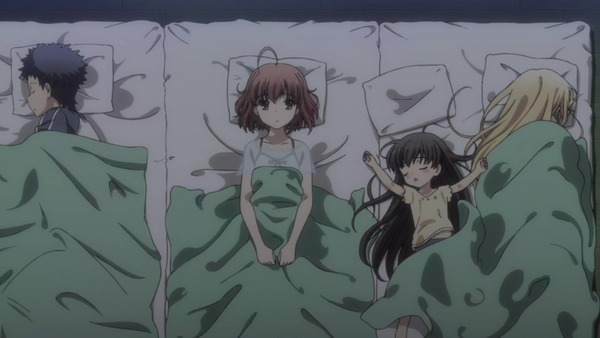 It seems realistic that the biggest threat to the Papa no Iukoto wo Kikinasai! family isn’t a mean landlord or other such crisis, but simple wearing down. Yuuta’s still doing too many jobs and now he’s neglecting school. Sora and Miu are exhausting themselves in and out of school and have no outlets. The place is a mess, and when Hina gets a fever they can’t contact Yuuta because he neglected to charge his cell phone. It takes one visit from a rude aunt for this to strike home. I was wondering when this would all happen. And now they have an offer for the girls to stay with an uncle, thus freeing Yuuta for his studies. “I’m sure that’s what your sister would have wanted,” says the letter (conveniently found by Sora), neglecting the fact that his sister raised Yuuta under similar circumstances. On the other hand, Yuuta’s got three girls to support, not just one. Actually, I’m on the mean aunt’s side on this. Besides, before, the danger was splitting the girls up. Now they’ll stay together, but now Yuuta’s part of their family, too. This would be a decent episode for all these things, except there were far too many bizarre incest dreams by Sora throughout.