Tasogare Otome x Amnesia 1 is a lot of fun.

Much of the fun comes from how it plays with mood and expectation. In the terrific opening scene we have Momoe, occult club member, sitting in a creepy room preparing notes on phenomena for a meeting. It’s all shadows and dust and dull sunlight through a window, actually reminding me of the realistic-looking art in Another. We hear cellos and low horns grumbling menacingly. And paranormal things start to happen … There’s a ghost in the room with Momoe. However, it’s soon clear that this scary manifestation is more interested in goofing around than threatening anyone. When our hero Niiya comes in the scene becomes straight comedy; he can see the ghost but must pretend he can’t for Momoe’s sake. Another character, Kirie, comes in to further complicate the situation. They go off to check out a haunted dumbwaiter, we get a scary moment … 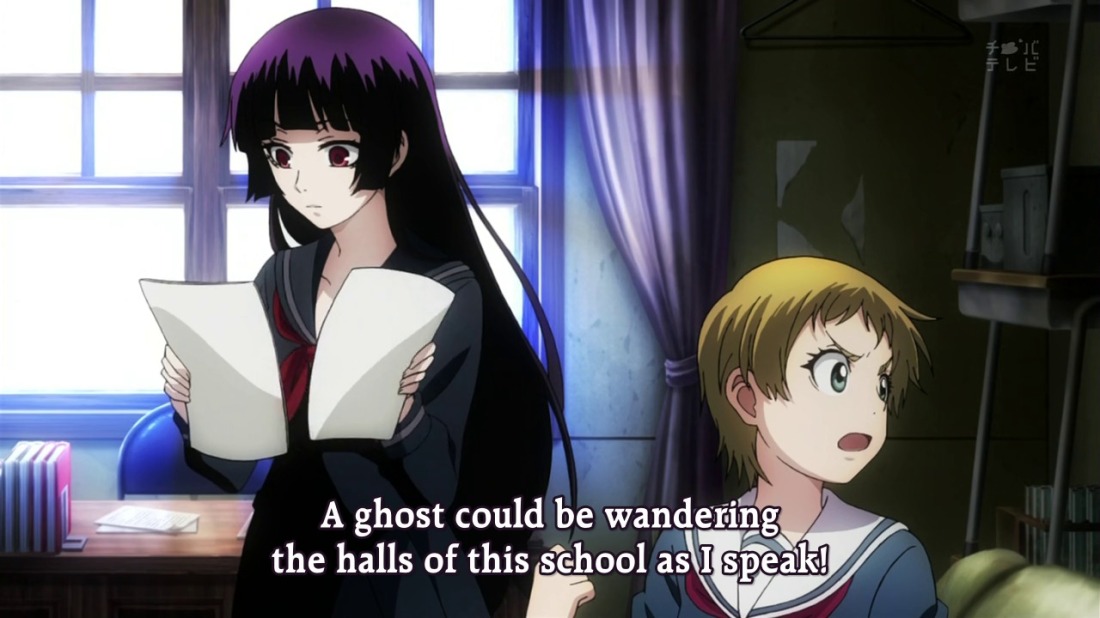 And the show goes right back to the start, but with the ghost, Yuuko, inserted. I’m not sure I liked this. We didn’t really need to see Yuuko actually lift that toy or flip through the notes; we got it the first time. On the other hand we’re given a little more information about her. Doing things like moving that cup wasn’t her being mischievous, she was simply thirsty (ghosts can drink?). She was more bored than playful, though at times we do get to see her having fun at the characters’ expense. And rewatching the er, ghost’s cut of the scene helped explain a few lines of dialogue.

As for what’s going on, the show is good at telling us just enough. Tossing Niiya into the dumbwaiter was Yuuko’s way of getting some time alone with him, not to mention a way to give us some exposition. It’s another good scene. We only get glimpses of their faces as the dumbwaiter descends and they talk about lonliness and happiness. We wonder how this situation came about. What happened to Yuuko? Why can Niiya and Kirie see her and others can’t? They don’t know, either. That’s what this show is all about. The final bit, where they investigate a grave, is more straightforward and thus a little duller. The plot is kicking in. Still, this was a great first episode. I hope they can keep up the sense of play while they expand the story.

On to a much more stupid show, where we meet one of Lovecraft’s most monstrous creations:

Haiyore! Nyaruko-san is yet another show where an unassuming high school boy, Mahiro, has a strange alien girl move in with him. The fact that it’s a famous horror monster adds a little spice to it, and though she doesn’t do much crawling yet, “chaos” isn’t a bad way to describe her. She’s hyper, motor-mouthed and can switch from romantic come-ons to bloody violence without taking a breath. Voice actress Kana “nishishishi!” Asumi is earning her pay with this character. Nyaruko has been sent to Earth to protect Mahiro from aliens who want to enslave him. Why? We don’t know. He’s just another anime male. She also needs to defeat the alien organization, and shop. You get the idea. I suspect I’ll drop this show eventually, but I liked it a little too much. I don’t find Nyarla as annoying as some will, I like the occasional breaking of the fourth wall and the otaku references.

In Jormundgand we have a highly-skilled, impassive child soldier named Jonah who joins up with the type of people he says he hates the most: arms dealers, the kind of people who supplied the weapons that killed his family. It’s not clear why he was recruited; the one responsible, Koko, is a young woman with a maniacal look, no mercy, and a strange set of values and beliefs that aren’t clear. She tells Jonah that she will teach him to love weapons. They’re not friends but they’re reliable. Much of the time the episode spends not having people shoot each other is spent on fleshing out Koko and her crew, people who can start or prevent a war (they spend this episode doing the latter, I think) by having little wars with other arms dealers. Jonah just watches and shoots when they tell him to. It’s a skillfully done first episode, the side characters each get attention while the plot keeps moving. It looks good. It’s also very cynical, and there’s the problem for me. On one level we’re supposed to deplore what these people do, but on another the show, with its well-done gun battles, wants to celebrate the so-called allure of this sort of life. Maybe I’m cynical, myself. I’ll watch a few more episodes and see how I like it.