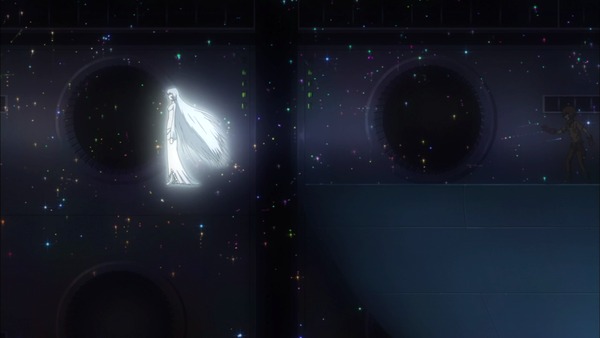 Ozma‘s mini-epic comes to a close. The last episode had a cut feel to it. It was too short to convey all the cosmic stuff effectively, but since they didn’t have the budget anyway, this comes as no surprise. Most of it could be predicted. Sam, Maya, and Mimay get “eaten” by Ozma (which we now get to see full-bodied. Any surprise it looks like a gigantic whale?)–my god, it’s full of stars! Maya merges with Ozma while Sam screams “MAAAYYYYAAA!” a lot. Some exposition about Ideal Children dying out and the next life force to inhabit this planet, which we already knew or guessed. Meanwhile Bainas gets ready with the weapon that will, I guess, capture Ozma. The bad guys are dropping depth charges which do nothing but piss Ozma off, so they’re pretty much destroyed. Also Gido, now returned as Dick, locks himself in some chamber or another which detaches so he can ram the great whale-machine. There’s also a tearful goodbye bit between Dick and Bainas which didn’t have nearly the effect it would have if the series had had any time to develop that angle. And then, frankly, I don’t know what the hell happened. But we get the expected end, glowing tendrils leading to flowers and fully-formed fish and a voice-over about mankind’s role on the planet. Roll the credits. Ozma might have done better for itself if it had been longer, but none of the ideas or stories they gave us were particularly new, so maybe it’s just as well. And so this six-episode, would-be epic comes to a close. Let’s move on.

Space Brothers 4 works because it does the best job yet of showing Mutta’s state of mind in a competitive, career and life-changing situation, and we can follow along because we’ve all been in the same situation. Even if we don’t intend to go into space some day, we’ve all had the pressures of facing the Dreaded Interview and the emotions that come with it. We’ve already seen how Mutta’s thoughts can be somewhat inappropriate for someone who’s supposed to be as heroic as an astronaut (not admiring a picture of Hibito because he’s weightless, but because he’s got two babes floating with him), but of course we’re actually all like that. We also see it in Serika as she leaves her last interview thinking about food. Now we get to see Mutta as he thinks he nailed the last interview, then deciding he failed because of one possibly botched question, changing his mind from one second to the next. The only thing constant is his rediscovered desire to go into space and the steely will that appears in him when he thinks this.

Once you figure it out, Moretsu Pirates can get pretty predictable. You know that Marika will be presented with a challenge, and that she will overcome it with only minor glitches and/or an embarrassing incident. In other words, nothing dangerous is really going to happen. This episode, with the Bentenmaru temporarily run by giggling schoolgirls, it’s just as well. In fact, it starts this way. Last week Marika announced they would jump in spite of problems with the engine. This episode begins with the girls eating. Then the crew is briefed on the procedure; any one of a hundred things can go wrong. The crew is worried. I’m not. And after a rocky but successful docking the crew gets to the part that might worry you the most, the actual piracy. But how could the passengers and crew complain about being raided by a bunch of cute girls in cosplay outfits? The Bentenmaru should have charged extra. Even the sneaky behavior of Lynn, the new Yacht Club president, turns out to be more or less benign. Hey! But in the previews people are actually shooting at them! Maybe we’ll get some real action! Or not.

I was worried about Natsuiro Kiseki after the endless running last episode, but #3 is better told and more interesting. Natsumi’s little brother Daiki’s buddy Yuusuke happened to see them flying back in episode one. I’m actually a little impressed that the show bothered to take that into consideration, frankly. Yuusuke is supposed to be smart and all, but based on what he saw he is convinced that not only did they fly but that the girls are witches. This doesn’t go down well with Daiki, and now the girls try to patch up the relationship. Which leads us to the thing that maybe interests me the most about this series: the big rock. I’m having a good time trying to figure out why it grants some wishes and not others. The girls feel the same way but have less fun about it as the rock fails to deliver at the show’s big moment. Yet it stuck Yuka and Rinko together (revenge for last time) when the other girls wished it to. Also, it let them go after they have a chat with Daiki about his problem. So why did it refuse in the end? Because they had already made that wish? Because seeing the girls flying for witnesses could be a breach of contract they made not to talk about the rock to outsiders? Yes, I’m talking a lot about the rock, but I will add that the girls are beginning to grow on me, too. Except Rinko needs more screentime. She hasn’t done anything yet.