Fujiko 3 … I don’t know much about steam trains, but I figure if the drivers are killed then no one is feeding coal to the engines, and the train would have stopped not long after leaving the station. And cutting off the freight car wouldn’t do anything to decrease its acceleration. Putting that aside this episode feels a little different from the others. Maybe because Fujiko doesn’t reveal herself (or expose herself) until the final scene. Maybe it’s the kids. Seeing them around doesn’t feel right in a series of this nature. About the only Lupin-y thing in the episode is Goemon, going through his motions, cutting flying bullets and clothes, muttering things about the job. He’s hired to assassinate the head of a tiny country, but this head is a nice man who dotes on his grandkids, so you know things won’t work out as planned. Well, I kind of figured that out anyway. Maybe, since it’s bringing Goemon into the series, it had to be.

Three conversations in Accel World 3. The first is a clumsy infodump. Haruyuki and Kuroyukihime link up for whatever reason and we learn that Kuro is actually a top-level player who wants to move on to Level 10, though the others at 9 want to leave things as they are. Her reasons make sense, but her actions (killing a Level 9) leave something to be desired. Wait, wouldn’t killing a Level 9 make her a Level 10? She’s been a pariah ever since. But there’s another network and someone keeps challenging her there. She says it’s Chiyuri. In conversation 2 Haru and Takumu re-bond. It’s a brief conversation, so I’m guessing he’s really the guilty one. The third conversation is the most interesting in that Haru and Chiyuri have that heart-to-heart they should have had long ago, but since her cable is so short they become physically intimate, a nice bit of imagery. So for an information episode it’s not too bad. However, Haru’s physical appearance is beginning to bug me. Why is the only one who looks like that?

Tasogare Otome x Amnesia 3 takes a darker turn, one which actually had me thinking that Yuuko may actually not be the benign spirit she appears to be, but it turns out we learned the reason for this last week.

On the other hand, we met Kirie in the first episode, and she was not particularly scared of Yuuko then, simply annoyed. But this episode is a first meeting of sorts, as she tries to warn Teiichi that the pretty spirit he’s hanging around with is actually a nasty thing that will drag him to her grave, or wherever people get dragged to by spirits. And considering the way ghost stories usually go, it’s no surprise that Teiichi is taken aback by this. What if Yuuko is actually setting him up? Watching this, I laugh it off, but then we see Yuuko the way Kirie sees her. And so does Teiichi. 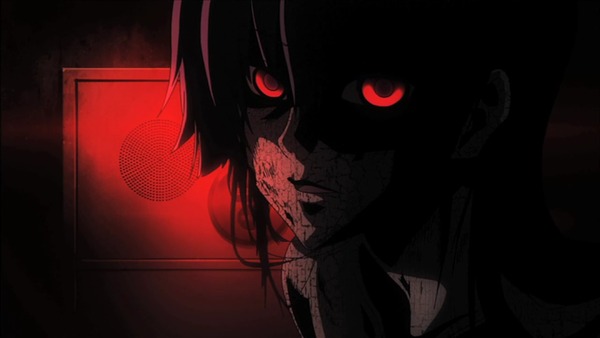 That’s the key phrase: “as others see her.” It explains the Momoe-vision of last episode and Yuuko’s frightening appearance here. But we get a sort of reprise of an earlier scene which I thought pointless at the time, when Yuuko asks Teiichi how she appears to him. He described her beautiful form. Now he does it again, because in spite of the evidence shown him, and the rumors, he can’t bring himself to draw away from her. As for Kirie, she’s shown enough in the forbidden basement that her mind is changed–partly. So now they have to figure out what what shrine down there is all about. One more question, though. When Kirie first saw Yuuko she saw the pretty girl from the photograph, the same figure as Teiichi sees. So is that as true a form as the scary one?

Not much to say about Acchi Kocchi 3. I’ve begun to notice how they use The Cute to punctuate moments, like a cat-ear twitch here, a cute “uh” there. Still, there were moments that dragged, where a beat moment went too long, not good for a show that uses beats a lot and usually well. In the first half they have fun in the snow. Tsumiki twice shows she has superhuman strength. In the home-ec section we meet a couple new students, two girls and a boy named Kyouya, whom they abuse for reasons beyond me. He doesn’t seem a bad sort. Tsumiki shows she has nearly-superhuman egg cracking abilities, and it will come as no surprise that Io’s a good cook. Oh, and the whole thing is cute.