Sakamichi no Apollon 3 is another good one in a number of ways. 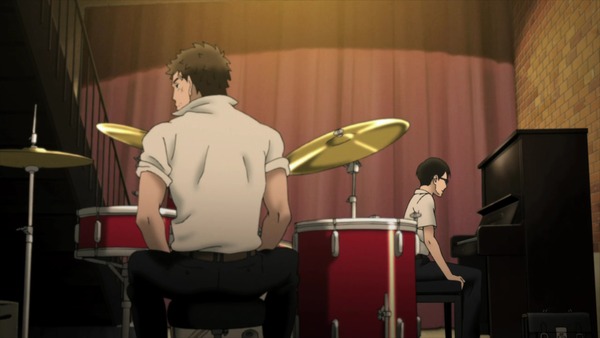 One thing the show does extremely well is take situations and scenes we’ve seen before and make them feel compelling. Take the scene where Kaoru and Sentarou make up. They sit there, glumly, at their instruments. You know they’re going to make up by playing together, it could fall into cliché territory, and to begin with, it does. Kaoru’s the one who wants to apologize, so he starts first. Sentarou hears him and adds a beat. But we’re rescued by Kaoru peevishly stopping when he hears Sentarou. When they do get together Sentarou changes his drumming style at least three times, for the sheer fun of it, while Kaoru complains that he can’t play when he’s laughing. This makes up for the ridiculous scene where Sentarou tries to ask Yurika out and acts like he’s thirteen, though that was necessary to give us a complication: he says Kaoru is the one doing the asking.

The love-square they’ve now set up is in no danger of becoming cliché because, apart from Sentarou’s shyness around girls, the characters behave naturally. They have a date, Sentarou does his best around Yurika, meanwhile Ritsuko becomes more and more distraught, and Kaoru notices. But what’s really going on? We’re viewing through Kaoru’s eyes. It’s clear to him that Ritsuko is in love with Sentarou and now she’s watching another girl take him away. But is that what she’s really thinking? We’ve had plenty of hints that she thinks Kaoru’s kind of cute. And she thinks that Kaoru’s in love with Yurika. That’s partly what makes the handkerchief scene work so well. Is she admitting defeat, as Kaoru thinks, or does she think Kaoru lashed out in jealousy over Yurika? And at the end of the episode, after Kaoru does his Bill Evans thing, even though we think it’s cleared up, we still don’t know how she feels. Yeah, a lot of good bits in this episode. Let’s not forget Kaoru’s visit to Sentarou’s home, with the kids.

Though we don’t know how it will go, Apollon has a straightforward narrative going. Tsuritama is all over the place. 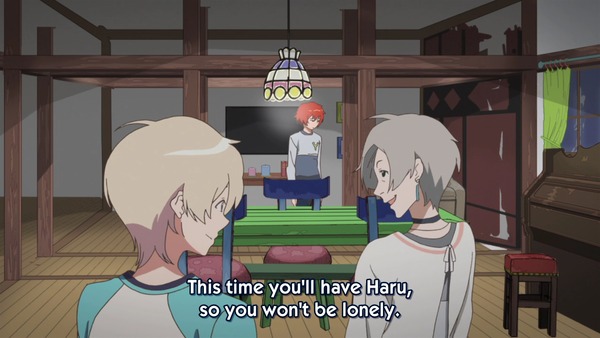 There’s been one important trait in the episodes so far. Yuki is troubled by something, which is played out in the fishing. He gets frustrated, gets a clue, goes back out and manages to do the fishing thing. He feels a little better about himself. Last week it was tying a lure. This week it’s casting. What these things have to do with the events that are actually upsetting him I don’t know. I’d try to write it off, but when Natsuki tells Yuki as he’s moping in bed, “this is a perfect time for casting.” So they got some metaphor thing going on. I just don’t understand it. The problem this week is that his grandmother Kate, is in the hospital. Yuki’s upset not only for that but because, as usual, she didn’t tell him anything until the time came. It’s up to Haru to have another nice chat with her, and another metaphor comes up, this one about flowers blooming before they die. Yuki gets over it by doing what he did last week, casting and casting until he finally gets the bait into the bucket. “Enoshima Bowl!!” This is witnessed by Natsuki, who just happens to be passing by–again. But this isn’t sloppy writing as much as one of the show’s little quirks.

All this is mixed in with much larger quirks. First, of course, there’s Haru and his sister. Apparently Yuki learning to fish is very important to earth’s survival strategy, though the sister thinks they should choose someone else. Interesting that their squirt guns stay holstered this episode. And there’s Akira, talking to his superiors at whatever organization he’s working for (something to do with ducks, apparently), and their drag-queen leader. That scene is bizarre enough, but we also get a glimpse of a mushroom-thing beneath the ocean floor. What the hell was that? This odd sci-fi business doesn’t quite mix in with Yuki and his personal problems yet, but we have a lot of episodes to go.

So after two shows with with intelligence and imagination behind them, it’s time for Medaka Box. And after episode 3 I have to say the damn thing is close to getting cut from my list. We start with the Zenkichi/Akune judo battle. We get several minutes of Akune tossing Zenkichi about while Medaka and Nabeshima argue over the concept of prodigies. Finally Medaka gets emotional, or pretends to, and Zenkichi responds by defeating Akune with one takedown … huh? How is that in the rules? Anyway, the upshot is that both Zenkichi and Akune are now in the student council, so now we have a vain pretty boy exposing his chest a lot to look forward to in future episodes. In the second half (and why wasn’t this whole judo thing done in one episode instead of cut in two?) the club goes back to being a more flowery version of SKET-Dance, except the gags aren’t as good. The whole disjointed episode stumbles along with little skill or effort put into it. Yeah, very close to dropping.